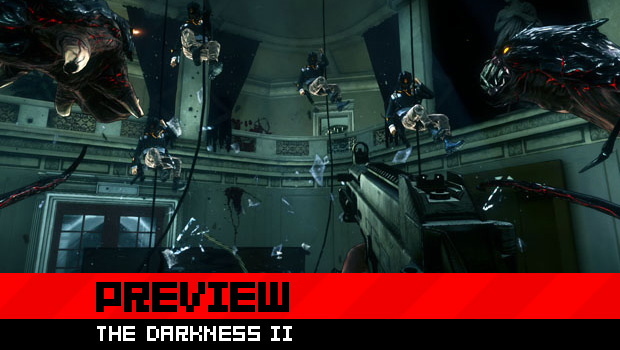 2007’s The Darkness was a fun, albeit flawed first-person shooter. The Starbreeze-developed title followed the exploits of Mafioso hitman Jackie Estacado on his 21st birthday as a hidden demonic power awakens inside him and he becomes a relentless killing machine.

The game stayed fairly close to its comic roots and offered unique gameplay options such as the controllable demon arms and Jackie’s ability to summon darklings to do his bidding. Now, Digital Extremes picks up the license and the groundwork that Starbreeze laid out, and it appears they have improved upon every aspect of the original.

When speaking with lead game designer Tom Galt, he emphasized to me how he and his team took the criticisms of the original game in mind when working on the sequel. One of the main points they wanted to highlight was the emphasis they had on the story over the last title. They felt that The Darkness was a good origin, but didn’t really present a lot to keep gamers interested, story-wise. To that end, this time around the gameplay is more story-driven, a move that aims to keep the players attention while still offering the same style of combat from the original and comic series.

Speaking of the comic, one of the first things players will notice with the new title is how much it looks like the comic. The developers wanted to stress that the look of the game isn’t cel-shading, but rather a new art style they’ve developed called “graphic noir.” Cel-shading tends to have thicker black outlines and a flat color to the art, whereas The Darkness II‘s style features more even colors, crisper tones, and even some hand-painted backgrounds to give it a more comic feel.

But back to the story. When we meet up with Jackie Estacado, he’s been suppressing the Darkness within for four years now. He has had a good handle on controlling it, never unleashing it for fear of losing control. However, that doesn’t last long, as a mysterious other force has plans for the Darkness itself. The demo that has been released now has some story elements in it, but these actually don’t occur until later in the game, and are much more detailed than what’s presented in the demo. 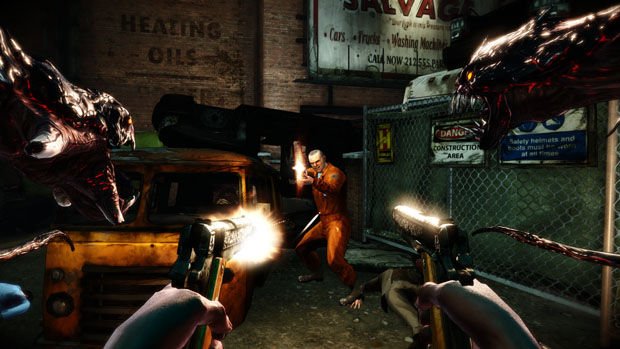 If you’ve played the demo on Xbox 360 or PlayStation 3, however, you’ve played the first level, where a mob hit squad attacks Jackie at his restaurant. The preview build I played picked up just shortly after the demo ends, with Jackie on the trail of the man who orchestrated the hit, a small-time hood named Swifty. For those that haven’t played the demo yet, this is where you first do the quad-wielding. Jackie can hold a small arms weapon in each hand, and the two “demon arms” act as the other two weapons. The left and right bumpers (or L1 and R1) control these arms, and the amount of mayhem you can cause with them is frightening and awesome.

Your left demon arm can grab items, weapons, and even enemies, while the right acts as a striking implement. As you pass through firefights, the arms can be used to pick up ammo, hurl objects at your foes (such as pipes and explosive tanks) and slap around enemies to be taken out up close and personally. These special executions are particularly gruesome to watch, and you can pick up more using the game’s talent tree. Essence points are earned through kills and other activities in the environment, and spending essence at portals around the environments yields new abilities (such as special attacks), executions, and more.

These attacks are fluid and fun, and I really got into using a combination of shooting, chucking items at guys behind cover, and then eviscerating foes who got too close. Of course, I also made sure to eat my fallen enemies’ hearts along the way, as that refuels health and gives more essence points. One of the strongest differences over the original game is how quick and focused everything is. The animations of the demon arms don’t ever interfere with your vision on screen, and even when eating hearts, the animations aren’t as long and played out as they were in The Darkness, so you can even get repeated chomps in before moving on. 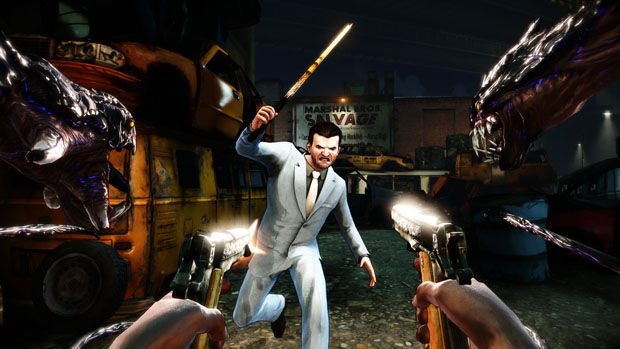 One of the biggest changes over the original, however, is the need for it to be dark in The Darkness II. Previously, you basically just shot out all the lights and moved on to the next section, using your darkness vision to see in low light, but never having the light be a noticeable issue with gameplay. Now, Darkness mode is always on, but when you enter the light, the arms hide within you, and you’re blinded and weakened by the light — so much so that you often have to take the lights out to advance. Enemies can even use light to try to take you down, so this even plays an active part in stopping Jackie throughout the game (such as in the first boss battle I encountered).

Not to give too much away (spoiler alert and all that) but it’s revealed that Swifty is just a patsy, sent by a new character, Victor, created for the game, who leads an altered version of The Brotherhood from the comics: a cult which worships the Darkness, and even has dark armor protecting their bodies. How this all plays out will have to be discovered by the player.

Rounding out the single-player experience is the presence of a darkling, one of the small creatures summoned by the Darkness. There are no longer various darklings used for specific tasks as was the case in the first game. Instead, the one you’re paired with acts as a guide, and the AI of this character is actually very helpful, taking out foes and assisting with kills. You’ll even have a section where you play as the darkling to unlock areas for Jackie to pass through. 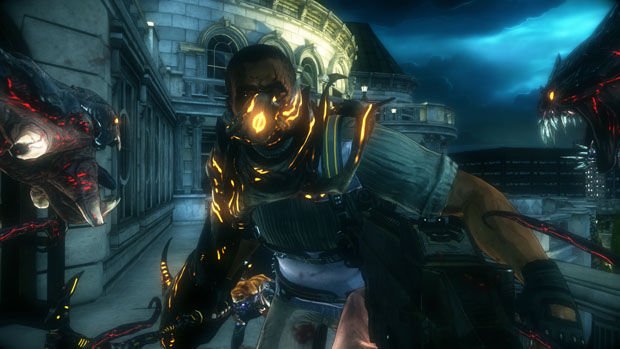 There was mention of two co-op modes, but I sadly didn’t get to play them. Vendettas is a story-driven, four-person campaign that runs concurrently to the main story, and offers backstory as to what’s happening with Jackie. The characters here don’t have the Darkness, but each has a special weapon that can use an ability similar to one of Jackie’s special attacks. There’s also a mode called Hitlist; neither of these two options are a versus mode. The developers claimed they wanted to keep the focus on story and offer unique co-op modes instead.

With all that I saw, there definitely seems to be a good deal of replay value packed into the game, with artifacts to find and store at your mansion (which serves as the game’s hub). The mansion itself offers a wealth of content too, including mini-games and interactions with characters from the comic that help move the storyline along. If you couldn’t tell, I’m really anxious to get back into this game when it’s released next week.