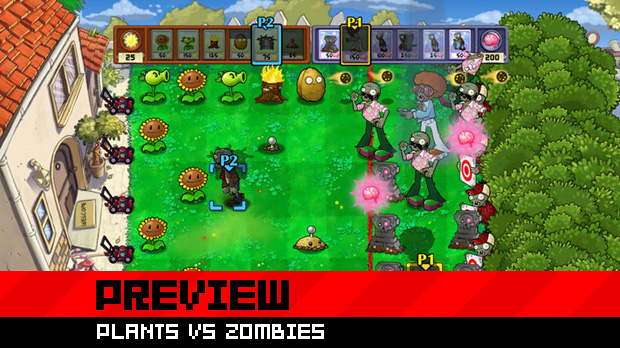 When PopCap released Plants vs Zombies last year, fans were impressed by the smart infusion of hardcore tower defense and casual friendly plants and zombies. It’s a cultural mashup that appealed to almost anyone who played the game, whether it was on the PC, iPhone or iPad.

And now Plants vs Zombies is coming to Xbox 360 on September 8 with a whole suite of new features. It’s nothing that really shakes up the game, and it means Plants vs Zombies for the 360 could very well be the best version of the game to date. And the big question people are asking? You know, whether or not the game is actually playable, with all the sunshine collecting and everything? Good news! It very much is.

We were lucky enough to be shown the game last night at a snazzy picnic in the Mission of San Francisco. With oddly sexualized plant dancers (even peashooters!), a performance by singer Laura Shigihara, personalized drawings by the concept artist from the game, and even an appearance by the man who inspired Crazy Dave (resplendent with a pot on head), Popcap has clearly been doing well with Plants vs Zombies, and it’s a good sign for the new Xbox Live Arcade version.

Right from the get go, everything from the original game is in Plants vs Zombies for XBLA. Other than one minigame (the seed rain one), every other facet of the game makes a return. The Zen Garden and even the tree that grows out with your progress is here, but there’s more to appeal to gamers of the original Plants vs Zombies. It’s nice that an already fantastic game can make a solid turn onto the console. 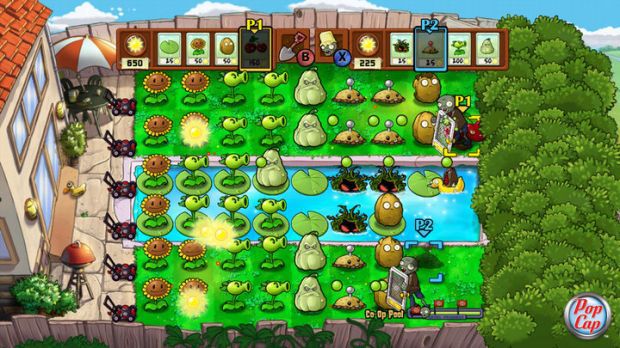 But I’m sure you care about how it controls. Quite well, actually. Collecting sunlight is no longer a clickclickclick endeavor, as now a quick tap on the R-trigger will magnetize the sunshine and and collect it for you. It’s a really simple way to make things run smoothly. The cursor is controlled with the analog stick, and it’s not locked to the grid, so you’ll be running all over to collect coins and place plants. The zombies and plant reload time has been balanced to fit the slightly different pace of the game. For a pure gameplay standpoint, it is perfectly playable and very enjoyable. Very few people will notice a problem with this set up, and shuffling through plant choices is as easy as hitting the 360’s bumpers.

Multiplayer is the major new addition to the Plants vs Zombies experience. With both co-op and versus modes, players will have a lot to work through with a friend. For example, the entire campaign can be played with a buddy, which is nice that it is also drop-in multiplayer. Mini games, such as the Wall-nut bowling game against waves of zombies, can also be played multiplayer, and it’s solid fun working together to blast through hoards. 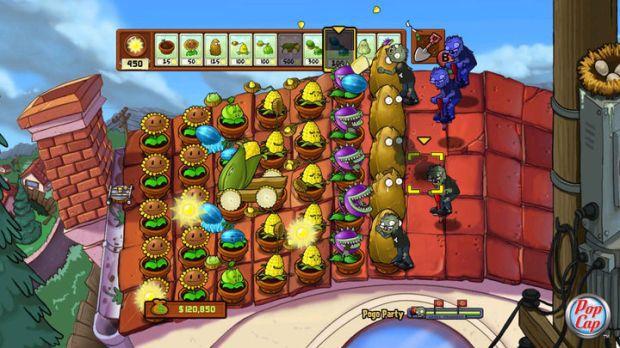 Versus, however, is where it’s at. There are some competitive versus modes in many of the mini games, but the flagship mode is the straight up Plants vs Zombies versus mode. One player gets to be the plants, while the other team chooses the zombies. Zombies have to protect a series of targets on the back of their playing field, and their resource is brains coming from tombstones, which can be placed like sunflowers. What results is the plants being very aggressive with peashooters, and the zombies have to play surprisingly defensive. It’s very balanced, and it is clear that PopCap has been working hard to make this mode work. Besides, playing as the zombies is a turn of technique not many games offer.

One of the really nice things that PopCap has done is focus on the Xbox Live experience. Instead of simply porting the game over, they have really gone all out on the UI for the game. For example, leaderboards, instead of just number scores for the Survival mode, are actually customizable houses that can be placed on a suburban block. All the achievements in the game are also little awards to decorate your lawn, and trashcans overflowing with plants or zombies to indicate what the casualties of your play time. It’s a simple feature, but one that indicates a certain level of polish. 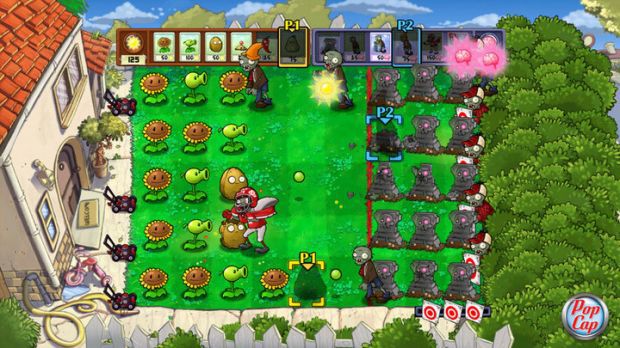 Extra new things: one new zombie will be making an appearance. It’s a trashcan zombie, and like other low level zombies in the game, he’s slow, but with high defense. Doesn’t really change that much up, but it’s something new. Also, there is a brand new minigame, in which players will ride a lawnmower and shoot peas out at passing zombies. It’s a mild shmup, and nothing particularly outstanding, but certain people will like it.

Coming away from Plants vs Zombies on the Xbox 360, I’m glad to see PopCap has designed a port that doesn’t seem to break anything. With some solid new features and an updated and thoughtful multiplayer addition, it’s fantastic to see Plants vs Zombies come out right. Keep an eye out for it next month for Xbox Live.