Overwatch 2 is fully engulfed in its launch season, following on from its October launch across PC and console platforms. And while players are already getting to grips with newer heroes such as Junker Queen, Soujourn, and the powerful healer Kiriko, developer Activision Blizzard is already prepping the way for the first character of Season 2, the powerful Omnic monk, Ramattra.

A Tank class character, Ramattra seems immediately comparable with OG OW hero Zenyatta, both characters being spiritual beings of Omnic build. Quite unlike Zenyatta, however, Ramattra has a far more aggressive nature — having initially been built as a war machine during the Omnic Crisis. As a Ravager model, Ramattra only knew violence and combat — laying waste to his enemies during the extended battle of man and machine. 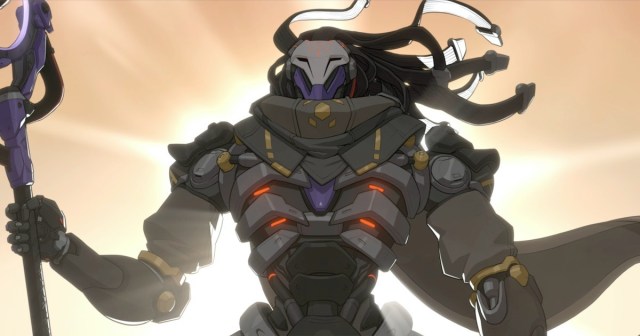 Survival. Whatever the Cost.

In the aftermath of the conflict, with prejudice riding high and the destruction of his fellow Omincs imminent, Ramattra fled to Nepal, where he aimed to focus on his spiritual sense, repress the horrors of war plaguing his mind and, most importantly, help forge co-existence between the human and Omnic races. Unfortunately, Ramattra only found his people facing further hate from mankind, who were seemingly hell-bent on destroying all remaining Omnics. Watching his robotic brothers and sisters fall time and again at the hands of humanity, Ramattra reluctantly renounces his desire for peace, becoming an extremist for the Omnic cause. With this new loyalist mindset, and calling upon his military experience, Ramattra would found the dangerous faction, Null Sector. Omnic survival at any cost.

Overwatch 2 sees Ramattra at a crossroads. Following the collapse of the Null Sector Uprising at the hands of Team Overwatch, Ramattra remains now a passionate but highly frustrated Omnic. The world-weary machine remains driven by a desire to ensure that his people are not eradicated by humanity, but understands that peace and spirituality also have a part to play in a world of co-existence. While his teachings as a Nepali monk remain a core part of Ramattra’s moral beliefs, the spilled blood of his fellow Omnics pumps in his cybernetic heart, reminding him that, sometimes, the only person worth trusting is yourself.

Ramattra is a Tank class hero, the second new heavyweight to join Overwatch 2 since Junker Queen. Sporting 450 health (with an optional 150 armor buffer), the Omnic warrior is a force to be reckoned at mid-to-close range, able to boost his abilities for close quarters when things get a little up close and personal. Much like fellow Omnic Zenyatta, Ramattra is a solemn but powerful being with a mastery of both martial arts and mythical technologies. However, unlike the tranquil mind of his brethren — Ramattra’s anger and frustration are readily apparent, most notably in his spiteful and even sardonic in-game dialogue. 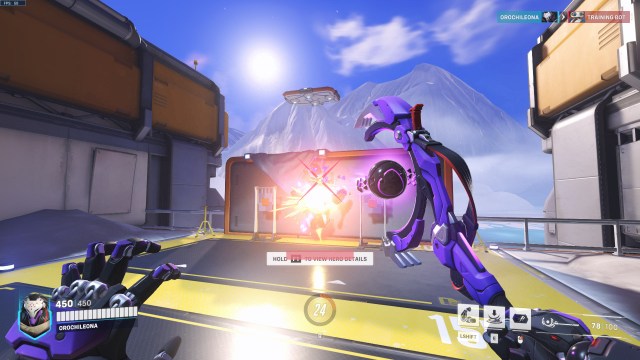 Ramattra’s primary fire is Void Accelerator, which sees him launch a high-speed stream of small, crystalline projectiles from his staff. With an ammo count of 100, Void Accelerator does its best work at mid-range, increasing its damage power when aimed at the opponent’s head. It is similar to Sombra’s uzi in regards to effective distance and speed of discharge, but Void Accelerator features a much tighter, concentrated spread of fire. 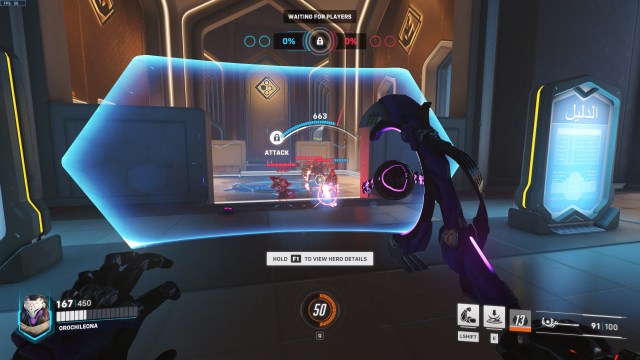 Ramattra’s secondary ability is the Void Barrier, a temporary shield that defends him and his allies from enemy fire. The Void Barrier can be placed at any distance within Ramattra’s line-of-sight, allowing him to put up immediate resistance on the front line for himself and his team, or to create a safe path for rushing down the enemy long distance.

Trading reliability for mobility, Void Barrier only lasts for several seconds or 1000 damage, and thus lacks the strength and durability of shield wielders such as Reinhardt. Void Barrier also has a huge 15-second cooldown. 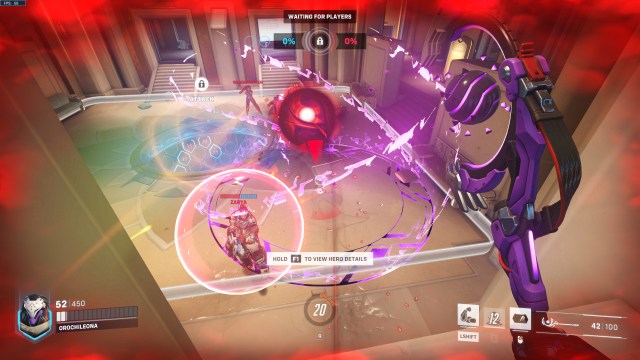 Tossing a ball of nano energy to the ground, Ramattra conjures up a mid-sized circular vortex, applying heavy gravity and minor damage to all within its range for a three-second duration. While hardly the most damaging of AoE’s (at 10 health per second), Ravenous Vortex can offer Ramattra’s team the edge in a proximity firefight, while slowing down the retreat, mobility, and flight options of its hapless victims. 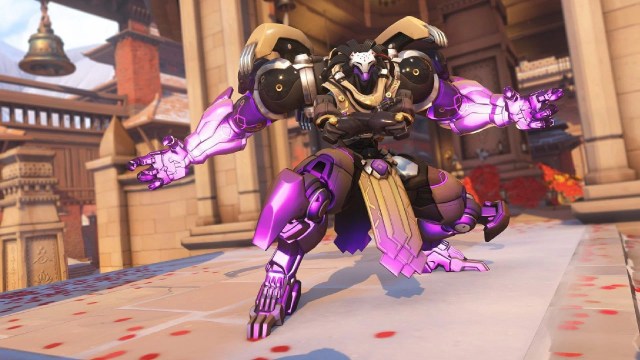 At the press of a button, Ramattra shifts into Nemesis Form, a close-combat build that switches out both his primary and secondary abilities. While in Nemesis Form, Ramattra gains a larger body, an instant 150 armor boost, a damage increase, and two new abilities. Due to the unstable nature of this form, it can only be maintained for eight seconds, which is then followed by an eight-second cooldown. Sheathing his staff, Ramattra’s primary fire becomes a series of brutal haymaker strikes, each of which sends out a mid-range power blast. These projectiles can pass through enemies, causing damage to multiple opponents, and can even break through D.Va’s Defence Matrix.

In addition, the actual punch itself pierces shields, making Ramattra a spearhead against a battened-down Reinhardt. Ramattra can throw as many of these punches as he is able within Nemesis Form’s eight-second activation period, (roughly 14 if uninterrupted). 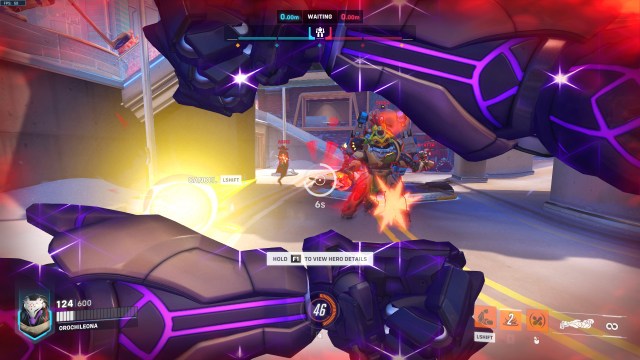 Ramattra throws up both of his arms, severely decreasing incoming damage at the cost of his own mobility. While blocking, all frontal attacks have a 75% damage reduction. This includes powerful Ultimates such as D.Va’s Nerf This! and Hanzo’s Dragonstrike.

In close combat with other tanks, Ramattra players can alternate between Block and Pummel to make quick work of heavy opponents whilst also defending themselves from counterattacks — Blocking hammer strikes and tossing jabs like Robo-Rocky. 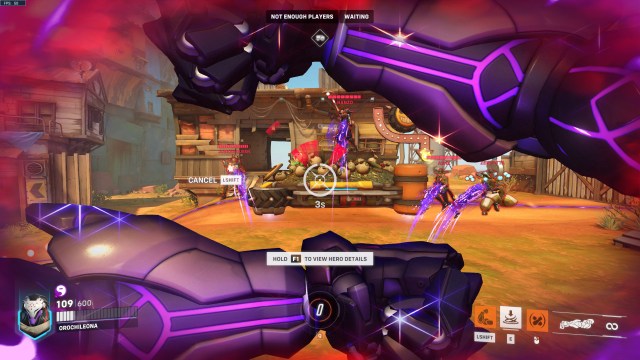 Ramattra has a very unique Ultimate in Overwatch 2, proving incredibly powerful in a team melee situation. Upon activation, Ramattra automatically enters Nemesis form while instantly unleashing an energy swarm, locking onto and draining the health of all enemies in his vicinity. Ramattra does not even have to be facing the opponent to cause damage, they need only be within his sphere of influence.

Furthermore, Annihilation only ends once it is no longer draining an opponent’s health, potentially running ad infinitum unless Ramattra is killed, or all nearby enemies are wiped out. In addition, Ramattra can still use Pummel and Block while Annihilation is active. As soon as there are no enemies in range, Annihilation will shut down after three seconds. In a melee battle, a savvy combination of Annihilation, Block, and Ravenous Void makes Ramattra an immediate threat to every enemy on the battlefield.

Ramattra will arrive in season 2 of Overwatch 2, which launches tomorrow, December 6.