Having the opportunity to head to Bethesda Softwork’s offices to go hands on with the PlayStation 3 version of Elder Scrolls IV: Oblivion (one of my favorite games of 2006) is one thing. Throw in the chance to spend time with the upcoming full-sized expansion, The Shivering Isles on the 360, and I’m in heaven. But with the unexpected addition of meeting a real, live Transformer, I can die a happy man.

What you see above you is what appears to be Constructicon leader, Scrapper, attempting to enter Bethesda Softwork’s Rockville, MD offices. After spending a few hours with Bethesda’s upcoming offerings, the last thing I expected to be was blocked into the building by a Decepticon. Truly a sight to behold, Scrapper would make a great addition to the Bethesda staff, and I wish him the best of luck in all of his future endeavors.

Back to the business at hand — our very own Robert Summa had a chance to sit down with Oblivion PS3 and The Shivering Isles earlier this month, as well. While he got his rumor squash on, his impressions were brief. So how are the games shaping up? Read on to find out. 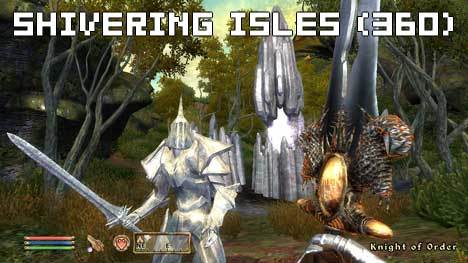 As expansive and varied as the world of Oblivion was, there were gamers who explored every nook and cranny, believe it or not. Even with the mounds of additional content available for download (horse armor, Knights of the Nine), it was a no-brainer that a full fledged expansion pack was in the pipeline. With Shivering Isles, it seems Bethesda has taken the task rather seriously. Not content with simply expanding the current world map, they’ve actually cracked it open, allowing players to enter another realm entirely.

My time with the game had me starting in front of a mysterious gate, made up of twisted, stone faces. As if that weren’t bad enough, a raving lunatic emerged from the mouth of the gate, ranting on about something or other. Naturally, in true “Nick playing Oblivision” fashion, I slaughtered him immediately before moving through the gate’s eerie, glowing mouth.

After a short sit down chat with a creepy man, the dark room I had entered soon dissolved into a flutter of butterflies (a gorgeous effect). Once the air had cleared, I found myself in a completely new world — curious plants, even stranger creatures, and a multi-colored sky unlike anything seen before in Oblivion. Still, as different as the game looked, the rules appeared to be the same — trudge forth towards a quest goal which will, in turn, reveal another. Repeat.

But these quests (referred to as “Fed Ex quests” by the Oblivion team) aren’t as bland as they seem. Unlike other sand box games, it’s not necessarily the beginning or the end of your mission that makes the game special, it’s everything in between. And there doesn’t appear to be a lack of things to do or to see in The Shivering Isles.

For example, one of the first characters I came in contact with, Jayred Ice-Veins, rhetorically asked me why things looked better without their skin. It seemed Ice Veins is obsessed with bones and he’d love to skin the nearby gatekeeper alive. Which is a good thing, because Mr. Gatekeeper holds the keys to the further realms of madness, Mania and Dementia. Problem is, after spending some time watching the Gatekeeper slaughter five men without breaking a sweat, it was obvious that retrieving these keys would not be an easy task.

But Ice-Veins had a plan — kill the thing with it’s own bones, of course! Together, we located a pile of dead gatekeepers bones (possibly died of old age, I guess), fashioned some arrows out of his ribs and before I knew it, Ice-Veins and I were head to head with the gatekeeper. Bone arrows in hand, he went down hard and the keys to Mania and Dementia were mine.

Now, the quest had really begun, and I had a choice to make — do I enter the land of Mania, a bright and warped land of cheer? Or do I choose Dementia, the dreary, emo land of shadows? Either way, I was in for a completely different experience — different missions, different personalities, and completely different landscapes.

One thing was made obvious during my time with The Shivering Isles — Besthesda didn’t skimp on content. What’s found here matches (and in some cases even trumps) everything found in the original. It’ll be interesting to see just how twisted The Shivering Isles actually gets. 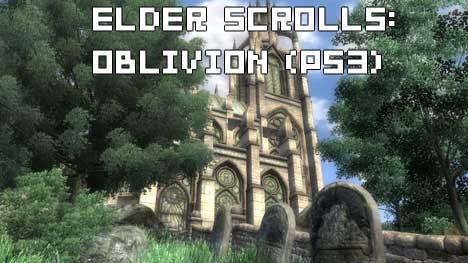 There’s not much more that can be said about Elder Scrolls IV: Oblivion, so that doesn’t leave too much to say about the PlayStation 3 port.

According to Bethesda’s Pete Hines, the team’s goal for the PS3 version of the title was simply to take the existing game and get it up and running smoothly on the new platform. No Sixaxis support, no fancy tricks, and no exclusive or additional content (save for all of the Knights of the Nine content, which will be available from the start on the disc).

That said, the PS3 version of Oblivion looked astounding running at 720p. Bright, vibrant, and sharp, it has the “look” of a PlayStation 3 game. Not necessarily better or worse than it’s competitors, games running on Sony’s console definitely have a different look that’s hard to define, and Oblivion is no exception. While it still shares many of the same issues found on the 360 (environmental pop up, for instance), it’s hard to argue against Oblivion being a gorgeous game, regardless of the platform it’s running on.

Gameplay wise, everything is in place, and the controls map perfectly to the Sixaxis. The only difference that I found (and it was minor) was that the magic and attack buttons had swapped buttons on the Sixaxis — the R1 button performed an attack and R2 trigger performed magic (versus the 360 controls which has magic and attack mapped to the right bumper and right trigger, respectively).

I will note that compared to the The Shivering Isles build I was playing on the 360, the PS3 version of Oblivion did look remarkably better (as Summa has pointed out). Both versions were connected to identical Samsung monitors, but for whatever reason, the 360 The Shivering Isles looked muddy and washed out. It should be noted that the 360 version of Oblivion doesn’t looked washed out on my set at home, and I was assured that this shouldn’t be an issue when the game is shipped.

As far as additional downloadable content and The Shivering Isles coming to the PS3, Hines suggested it was in the pipelines, but didn’t know when or how that content would be delivered via the PlayStation Network (a running theme with third party developers, it seems). Their current focus, he reiterated, was just making sure PS3 users get a perfect port of the original Oblivion experience.

Overall, March is looking like a good month for Oblivion fans. But for everyone else who thinks “level scaling is the devil,” it’s doubtful you’ll find anything in either of these games that will change your mind.