It’s been two years since a proper NASCAR game has been released for consoles. Electronic Arts was pumping out yearly iterations of the sport since the PlayStation 1 era, but then the series came to an abrupt stop after NASCAR 2009. Now the racing franchise is back, thanks to developer Eutechnyx and Activision.

Eutechnyx has a long history of racing games under its belt, and what they’ve done with this new NASCAR simulation is everything a fan of the sport could ever want. NASCAR The Game: 2011 immerses you into the entire experience of NASCAR, beyond just the racing. The new game also has some of the best destruction modeling I’ve seen since Burnout Paradise.

The first thing I have to talk about is the amazing damage system. I’m not a NASCAR fan; never will be. It’s an interesting sport for sure, but I just can’t get into it. So, of course, the first thing I did was do a 180 with my car and barrel down the track going 200 miles per hour into the 42 oncoming cars. My car (along with the other vehicles unlucky enough to get caught in my deranged behavior) were as torn up as they would in real life. Even better, the parts that flew off cars and landed on the race track damaged other cars as they ran debris over.

So with that out of the way, let’s talk about what will get NASCAR fans really excited. Activision brought us out to Phoenix, Arizona to see a real NASCAR race and we got to see the behind-the-scenes stuff that comprises a race. Seeing this stuff in person was a real eye opener, as I had no idea so much work and effort goes into every race. 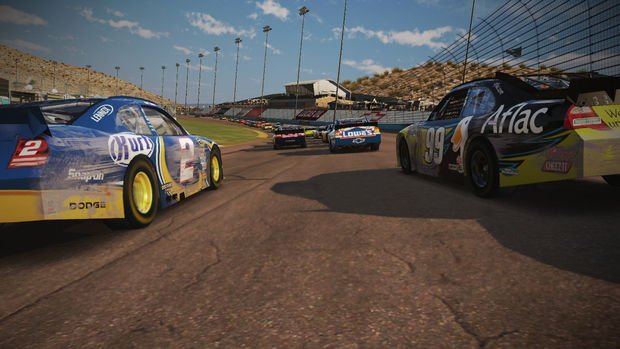 All that work that takes place before a race is translated into the new game. A pound of pressure in one of the tires in a car can make or break the racer, and that level of realism is featured in NASCAR 2011. Basically, whatever the crew can do to a car in real life, you can do in the game. Extras are thrown into the game as well, such as steering assist, brake assist and more. These features — which can be turned off — are thrown in to help new players learn the ropes.

While I didn’t see this first hand as my time was short with NASCAR 2011, the AI will adapt to the player’s skill levels. This way, it’ll never seem like you’re always trailing in a race, so that you’re kept in the action with the 42 other drivers, part of what makes NASCAR so thrilling. You’ll also find yourself developing rivalries within the races. Simply get too aggressive with another driver and they won’t harass you right back in future races.

The main mode is obviously the campaign, where you’ll be racing to earn money, prizes and more. The more races you win, the more things you’ll be able to unlock to modify your cars with. There are a few other race modes too, such as track testing and the Eliminator, where the last place racer is taken out each lap. There will also be two-player split-screen support and online multiplayer for up to 16-players on the Xbox 360 and the PlayStation 3. 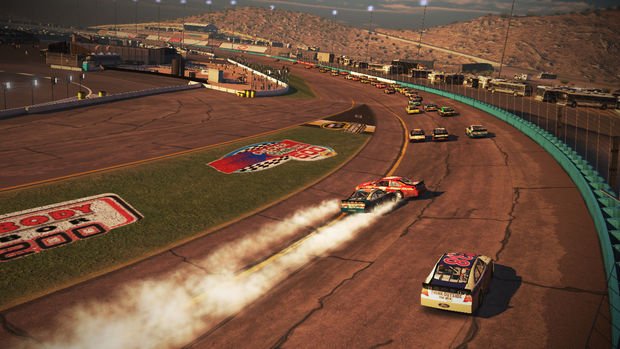 NASCAR: The Game 2011 is going to be the first simulation NASCAR game to hit the Wii, too. Expect motion control steering and online play too. The PS3 and Xbox 360 versions of the game won’t offer any motion controls this time around, but the sequel may very well include it, according to the developers.

The game will ship with the 2010 tracks, cars and race schedule, but fans can expect a free patch which will update everything to the 2011 scheme and plans. Fans will also get the new Kentucky raceway which debuts next year in NASCAR, bringing the total tracks to 23 in the game. Expect some Twitter and Facebook integration that will allow you to share photos plus a feature to record your replays, edit them and then send it off to YouTube.

Eutechnyx put a ton of work into bringing NASCAR to life on the consoles. The game definitely has that feel of putting you into the real experience and is absolutely gorgeous. It’s like a night and day difference comparing this new NASCAR to NASCAR 2009. The only thing I had issue with was the sense of speed. I got to see a real NASCAR race as part of this Activision event and never really knew how fast the cars are blazing the tracks. That same sense of speed didn’t translate to the game experience. 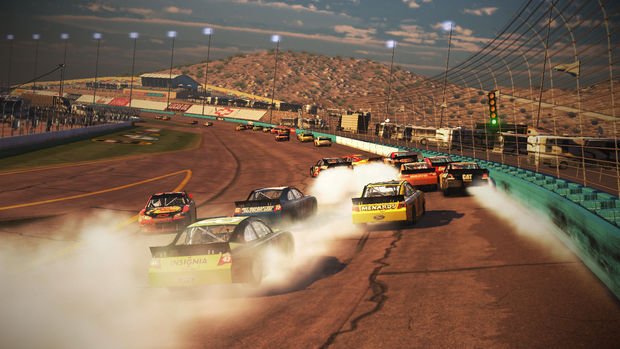 Like I said earlier, I’m not a NASCAR fan and racing simulators in general. I much prefer the arcade feel of something like Burnout. But I recognize the appeal of these types of games and can say that fans are in for a real treat when NASCAR 2011 is released next year.

*Full disclosure: Activision flew us out to Las Vegas to play the new game and race in a real stock car around the Las Vegas race track. We then drove down to Phoenix to see an actual NASCAR race.