When I first saw MotorStorm: Pacific Rift a couple years ago, I rolled my eyes. At a glance, it looked like one of those super-fast racing-inspired games for loud children. While I wasn’t terribly wrong with that assessment, it quickly became one of my favorite racing games.

Last week, I got to play MotorStorm: Apocalypse. I’d seen the trailer a while back, and I was pretty impressed with the idea of racing monster trucks through a post-apocalyptic wasteland. But did it explode my brain off with its awesomeness? 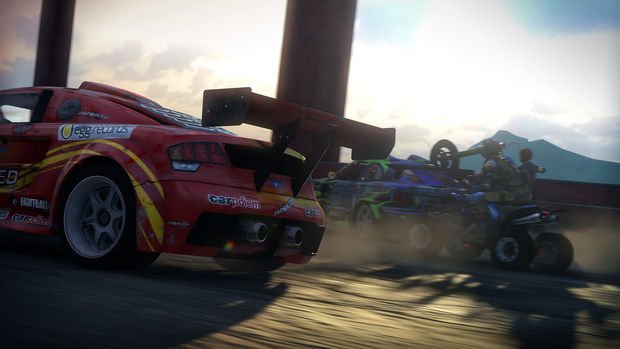 The basic premise of MotorStorm: Apocalypse — for those unfamiliar with the series — is no-holds-barred racing that almost completely disregards the laws of physics, reality, and motor vehicles in general. You can choose from monster trucks, street racers, dirt bikes, and more. Of course, all of these vehicles have a turbo-boost. Or nitrous, or super-speed. I’m not sure what the official name is, but I really don’t care. It’s the shit that makes you go ridiculously fast, and it’s really fun.

One of the things that initially made me fall in love with MotorStorm: Pacific Rift (the most recent entry in the series) was the fact that if you used your boost too much, your car would blow up. This is a game where you literally go so fast, you explode. On certain tracks, you can drive through water to cool down your engine, and use your boost longer. Conversely, on other tracks, there is molten lava and patches of ground that are arbitrarily on fire. Driving through them will make your car blow up faster, just like in real life. 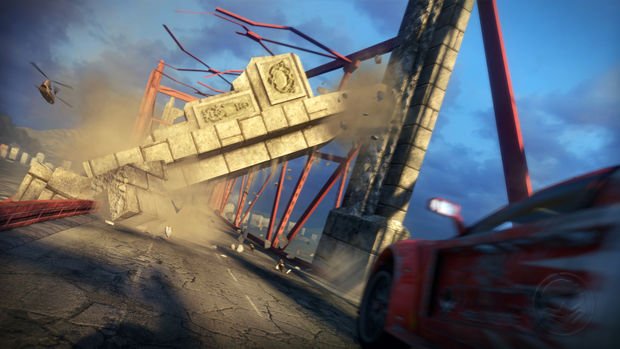 MotorStorm: Apocalypse keeps a lot of the fun stuff from Pacific Rift, but there are a number of new additions. You know, aside from being the first title in the series that doesn’t sound like a flavor of Mountain Dew. Arctic Burst, Thin Ice Freeze, Baja Blast, Arctic Edge: Which of these is actually a MotorStorm title?

Apocalypse is also the first MotorStorm game that can run in 3D. I got to try that out, and it was okay.

As far as 3D gaming goes, I’ve only played around with the 3DS. Last week was the first time I’ve seen a 3DTV in action, so I don’t really have a basis of comparison. It didn’t look terrible, but I didn’t have my mind blown or anything. Honestly, I just don’t care about 3D. It doesn’t do anything to improve the gameplay. And unless you’ve got plenty of extra glasses, any friends you have over will probably get a headache waiting for their turn to play. That being said, I’d prefer to play MotorStorm: Apocalypse in 2D, because as cool as they are, the 3D effects don’t make up for how ridiculous I feel when wearing the required glasses. 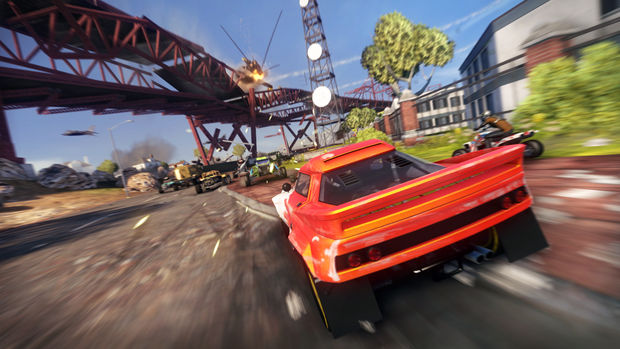 If it wasn’t readily apparent, MotorStorm: Apocalypse takes place in a post-apocalyptic wasteland. The tracks are collapsed buildings, wrecked highways, and demolished suburbs. In addition to the standard hazards like cliffs and obstacles, there are also crazy people on the sides of the road shooting at you with rocket launchers and hurling molotovs. It’s straight out of The Road Warrior.

I’m a huge fan of Mad Max and Fallout, so I was excited about this premise. After playing, though, I was a little disappointed. It’s an ambitious game, really. Driving a rocket-powered monster truck over the rooftop of a half-exploded skyscraper while lunatics are hurling firebombs at you; that’s not something you do every day. The level designs are absolutely beautiful, but they weren’t as fun to play as I’d expected.

At one point, while playing one of the city tracks, I said, “It sorta feels like a Spider-Man game where Spider-Man’s lost most of his Spider-Powers, and also, he got transformed into a motorcycle.” Again, what sounds awesome in theory isn’t always as fun in practice. 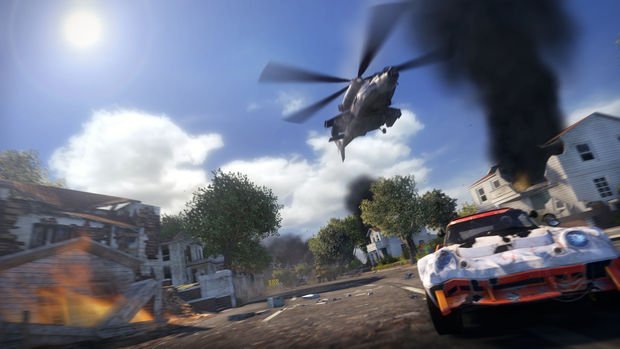 Another problem I had was the constant presence of crap all over the tracks. Broken-down cars, oil drums, rubble, crazy people. I get it: it’s the end of the world, and trash collection isn’t happening this week. It all looks really cool, but I felt that this many obstacles just impeded gameplay. Well, you know, with the exception of running people over, which is just hilarious.

MotorStorm: Apocalypse features five new vehicle classes: supercar, superbike, muscle car, chopper and the hot hatch. New things are usually fun, but in the case of MotorStorm, the addition of new vehicles makes things really interesting. If you weren’t aware, all thirteen classes of vehicles race at once. Guess what happens when you run over a guy on an ATV with a monster truck: the ATV guy dies. It’s awesome. The monster truck is a lot slower, though, so it’s a toss-up. You like running people over, or going fast?

I had a lot of fun with the “hot hatch,” which I kept referring to as “this ridiculous smartcar,” much to the annoyance of the game’s art director. It’s one of the new classes, and it’s a souped-up hatchback. You’re racing against monster trucks, muscle cars, and guys on choppers… with a tricked-out Geo Metro lookalike. 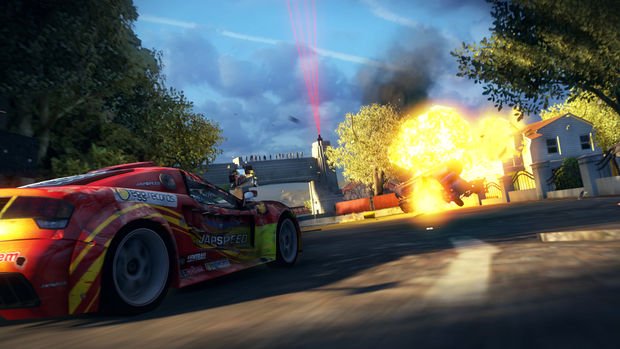 I spoke with Apocalypse’s art director, Simon O’Brien, and asked him about the inspiration for the game’s tracks. A lot of them looked really familiar. This makes sense, because they were loosely based on the West Coast, with specific attention to the Bay Area. As far as specific landmarks go, nobody was trying to recreate any actual locations.

There’s a particular track set on a boardwalk that looked really familiar, but I couldn’t place it. Turns out, the inspiration was a mix of the Santa Monica Pier, the Santa Cruz Boardwalk, and Fisherman’s Wharf. Having lived near all these places, I can vouch for its amalgamated authenticity.

The online multiplayer for Apocalypse features a neat system for earning experience. Instead of giving players a bunch of boring stats to tweak, like speed or steering, there’s a slew of different perks that can be unlocked. For example, having your vehicle give you a longer “please stop using the turbo-boost!” warning before it explodes, or what about this: when your car does explode, it lets off a sonic boom that’ll knock other racers off-course. 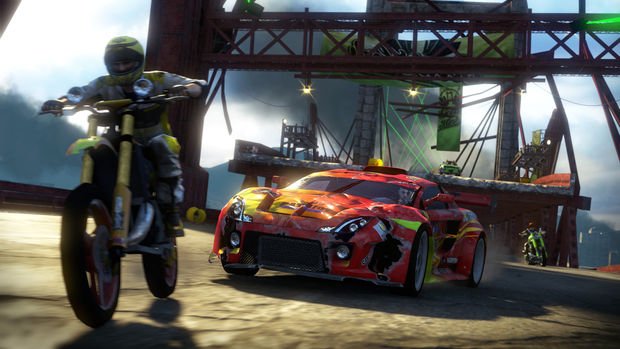 In addition to crazy explosion-related perks, you can also unlock new decals and stuff to stick on your car. I didn’t get to see it, but I was assured that all the vehicles could be customized extensively, so everyone on the Internet can know if you have a horrible sense of color coordination.

Aside from online multiplayer (which supports up to sixteen players), I was happy to hear that four-player split-screen play is available. As much as I hate actually playing split-screen, it makes video games a social activity, so I’m happy to see it included. 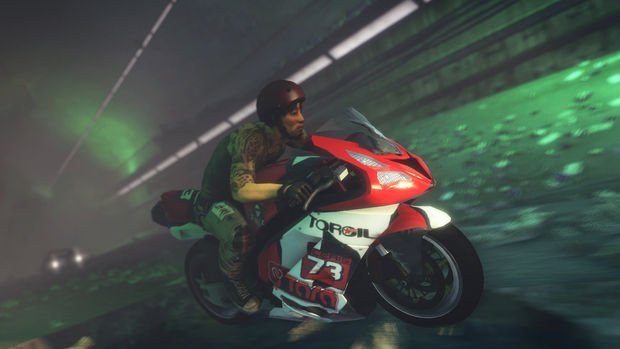 One element that I doubt anyone will hype much is the in-game camera. It’s a simple concept: If you do some super-badass shit, and wanna show it off, hit pause. Take some pictures. Seems corny, but with the amount of detail in MotorStorm’s vehicles and tracks, and the speed at which the game gets played, there’s a lot you might miss. The camera offers a great way to take a closer look. While there’s no option to take 3D pictures yet, Simon said it was a feature he’d like to see, possibly as DLC. And he’s the art director, so that’s a good sign.

Overall, I think MotorStorm: Apocalypse is a fun game, and that the MotorStorm series is the spiritual successor to games like Road Rash and San Francisco Rush. If I had a copy of Apocalypse, I would probably play the crap out of it, but it didn’t immediately grab me the same way its predecessor did. While I want to applaud the imaginative post-apocalyptic look this new installment is taking, the new tracks looked better than they played, and the amount of rubble on the track hindered the game’s fun. Given, it’s still fun as hell; it’s just not as fun as ultra-mega-turbo-hell.

Filed under... #Destructoid on assignment#Evolution Studios