has always been a series that you either love or you hate. Gameplay criticisms aside, it was a defining game in the industry, perhaps the sole reason Planet Douchetaria sent down Jack Thompson in his douche pod to wreak havok upon the Earthlings. It’s an extremely profitable franchise and there have been countless iterations and games sales to prove its worth.

At this point, you should know whether or not you’re going to like Mortal Kombat: Armageddon for the Wii. So if you’re a Mortal Kombat hater, feel free to read one of the fourteen recent posts about Final Fantasy.

While this version of the game doesn’t differ much from the PS2/Xbox versions that were released last year, it does (of course) take full advantage of the Wii’s motion controls. I had a chance to play an early version of the full game at Midway’s Gamer Day and came away surprised in more ways than one. 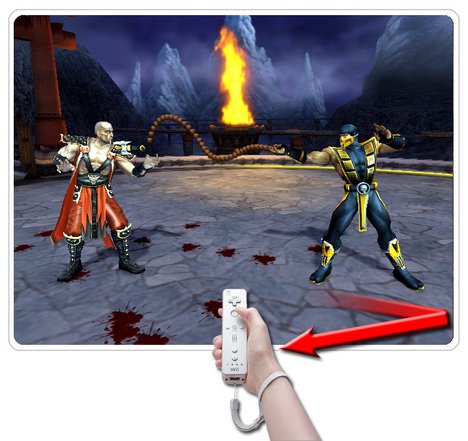 I do not hate the Mortal Kombat franchise; I understand where it lies on the totem pole that is the fighting genre, and I respect and enjoy it accordingly. I bought Mortal Kombat for the Genesis on “Mortal Monday,” I didn’t think Mortal Kombat: Special Forces was that bad, and I even spent a fair amount of time with the fun (but flawed) Mortal Kombat: Deception (Puzzle Kombat needs to be on XBLA, Midway – thanks).

That said, I couldn’t dig Armageddon on the PS2/Xbox.

Sure, it covered all of its bases, with nearly every character from the MK universe playable, and a robust create-a-fighter mode. But something about it was lacking. Was it the loss of the third fighting style per fighter? Had I just had enough of Mortal Kombat in 3D? Who knows, but the fact remains that I was not expecting much out of the Wii port.

As I said earlier, the game is essentially the same as what I remember. Although it contains an exclusive Endurance mode and one secret character not available in the earlier versions, if you’ve played Armageddon, you already know what to expect. That is, of course, until you get the Wii controller in your hands.

You move your fighter with the nunchuck (the Z and C buttons are block and change fighting styles, respectively) just like you would with any other analog stick. Your right hand will be doing things a little less familiar, however. For starters, all of the attacks are mapped to the directional pad instead of buttons and yeah, it’s as awkward as it sounds … at first. After awhile though, I was pulling off combos with ease, although I still feel standard buttons would be more effective.

Summa has posted the images which show how the game’s special attacks work and it’s pretty much as simple as it looks. I spent most of my time with my old standby, Scorpion, and once I understood the timing, I was throwing spears and burning up fools in no time. Waving the controller left in conjunction with the B button, and then waving it right was all it took to throw a spear. Making a basic quarter circle “fireball” motion while pressing the B button activated Scorpion’s flaming jack knife attack.

In the context of a battle, everything seems to work smoothly (until the Wii batteries start to die, since Nintendo doesn’t provide that mystical rechargable battery technology I’ve heard about), and I quickly became the greatest Mortal Kombat: Armageddon Wii player of all-time. I was so good that I consistently whooped designer John Edward’s ass (he let me win, I suspect), giving him an opportunity to attempt to show off how the create-a-fatality features works with the Wii controllers.

Like the special moves, creating your own gruesome fatality with the nunchuck and the remote should be a snap, but I was only able to chop Edwards to his knees. He kept telling me to lunge forward with the Wii remote and then swing up in order to rip his head off, but it never happened (so I just had to talk a lot of shit, instead). Presumably, decapitation and limb removal will be much easier in the final game.

For those who are scared of motion controls, fear not. Simply use the nunchuck’s analog stick to pull of special motions in a traditional manner or, if you’re feeling saucy, Armageddon supports both the classic controller and the standard GameCube controller.

I also had a chance to play some of the game’s Motor Kombat mini-mode (kart racing FTW) with Edwards and Senior Producer, John Podlasek, and much to my surprise, it was the highlight of the game. While this feature was also included in the PS2/Xbox version, I found it incredibly disappointing on those platforms. Despite the hyper adorable, super-deformed MK characters, the controls using a regular controller felt stilted and unresponsive.

Not so on the Wii, which uses motion controls, much like Excitetruck. I had a blast with Motor Kombat on the Wii, and if it were a full-featured, stand alone game, Midway just might have my money.

Unlike other versions of the game, the Wii version of Armageddon will not support online play, but that’s okay because I can’t remember my phone number, much less my friend code.

Mortal Kombat: Armageddon will be available for the Wii this Summer.