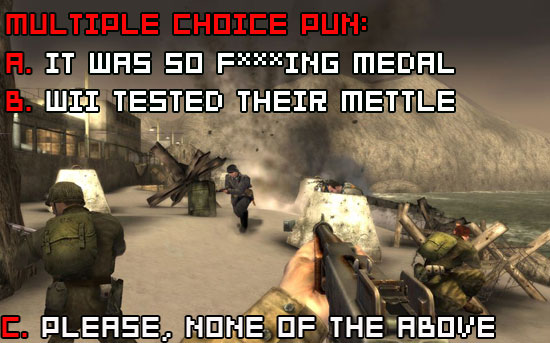 As a committed pacifist, I can’t believe what I’m about to write. I played a war game at EA’s offices this week and found it downright delightful.

Those of you who follow the Medal of Honor series closely probably found yourselves wallowing in a sweet miasma of shame and disappointment over the previous Wii installment, Medal of Honor Vanguard. It’s no secret that the Vanguard port controlled like a drunken walrus in ballerina slippers. On top of that, it just wasn’t there. The Nazi shooting gallery felt so awkward that you kept expecting a carny to hand you a large purple elephant doll as a reward for your sharp eye. Thankfully, none of this is the case in Heroes 2.

EA Canada has collected some intelligent, dedicated designers that poured their hearts into creating what could be the Wii’s quintessential first-person shooter. Let’s run through some stats. Online multiplayer modes featuring up to 32 human combatants: check. Intense showdowns in varied historical locales that run in a smooth, lag free 60 frames-per-second: check. Graphics that look like they took longer than a couple of 80-hour crunch weeks to create: check. Absolutely no friend codes needed for convenient match-ups with your pals across EA Nation’s server: holy mother of God, check.

Hit the jump for my hands-on preview and conversation with the game’s lead producer, Matt Tomporowski.

Medal of Honor: Heroes 2 has three major modes in its Wii incarnation: arcade, campaign, and multiplayer. The arcade mode is an on-rails shooter, much like Resident Evil Umbrella Chronicles. The game shoves you along a conveyor belt through a preset path of World War 2 carnage. The area I tried in this mode was a Nazi-infested submarine port in Normandy. The gameplay was very basic but entertaining. Your character has the ability to quickly duck behind objects to hide from enemy fire (think of the cover pedal used in Time Crisis). You can shoot sprays of bullets by firing the Wii remote’s trigger or zoom in on distant enemies for precision sniping. Health packs hide throughout the landscape and can be picked up by simply shooting them. The arcade mode was obviously designed for a more casual light-gun styled experience, and considering this, it was actually a lot of fun to play. Although I only had time for one level, an EA spokesperson stated that the arcade mode was a full-fledged component of the game, equal in scope and importance to the single player campaign.
The game supports the Wii Zapper and I have to second Colette’s opinion: it’s not as cool as it should be. There were no problems with this game’s implementation of the zapper and thankfully, you aren’t required to use it. Besides being generally clunky and awkward, my main complaint with the Wii Zapper is that it reverses your general idea of how you would fire a gun. For pointing purposes, the Wii remote is encased at the front of this plastic contraption, with the analogue stick holstered further back. This setup creates a major problem: you’re actually pulling the trigger to fire the gun with the wrong hand. It doesn’t matter if you’re left handed or right handed, however you hold this thing, you’ll be firing it with your finger directly under the muzzle. I kept switching my hands back and forth trying to find a way to do this comfortably, but it continued to feel counter intuitive. There aren’t many ways to resolve this problem with a peripheral that doesn’t already have all of the Wii controller functions built in. If you’re looking for a cheap plastic casing to replicate the sensation of holding a gun, you might be looking for a long time.

After playing the arcade mode with the gleaming white death machine, I was able to move on to the single player campaign with an unadorned Wii remote and nunchuk combo. I had the time of my life with Metroid  Prime 3 last week, and I admit that I did walk up to this game with a certain amount of premature schadenfreude over it’s potential failure to stack up. Well, I was wrong. Is the egg showing? Rather than an isolated pocket of success, Metroid might prove to be the game that leads the pack in an avalanche of well-designed first person controls. EA Canada’s Matt Tomporowski told me that his team had been enjoying Corruption and really admired the controls, “We really like it. We’re big fans of the Wii, big fans of Nintendo. The controls are great on Metroid. What we did is we really learned from other games. Not only EA Games, but non-EA games for the Wii that really get the remote.”
The aiming controls for the campaign mode are responsive and sensitive, you are no longer required to flick the controller in an epileptic seizure in order to do basic game actions, you don’t need to park your reticule in the corner of the screen before the camera performs a nauseating turn; in other words, they’re a complete 180 from the controls in Vanguard. Speaking of 180s, there’s even a handy command for instant 180 degree turns to snag enemies sneaking up behind you. Take that Samus! Heroes 2 also employs a smattering of context sensitive Wii remote controls. If you pick up a rocket launcher, you’ll actually hold the Wii remote upside down over your shoulder to fire. There are sections where you’ll need to clear land mines by waving the Wii remote slowly until it begins to vibrate. These unique implementations feel organic to the game, work as they should, and are generally unobtrusive.
Tomporowski elaborated, “What we did is, we had two priorities. One was: let’s really nail the controls. The second was: let’s make the best game, in terms of visuals, that we can on the Wii.” Playing the actual game you’ll be impressed by the muscle they were able to squeeze out of the Wii. EA confirmed that the game uses anti-aliasing technology, which has been a point of contention for many Wii detractors.

The multiplayer mode might be the most exciting feature of the game. This section wasn’t available to experience at EA’s offices yet, but the details sound promising. We’ll be able to compete against 31 other players online in three different challenges: capture the flag, death match, and team death match. You can select between six different maps that feature similar settings to the single player campaign, but have been customized to improve the multiplayer experience. When EA decided they would allow up to 32 players to compete, they knew they would need to ditch the friend code system and host the game on their own servers. I asked Tomporowski if he found there was a lack of online infrastructure from Nintendo to support the game. He responded that it “was definitely a challenge. It wasn’t for lack of desire or trying. You know, the Wii’s really new hardware. There’s a lot of challenges. I think, long term, it’s going to be easier and easier to develop with Nintendo online and we’re going to be seeing a lot more Wii games online. You know, at Christmas and next year. I think we’re probably at the front of a big wave of online [games].”

Serious gamers will definitely be spending more of their time with the single player campaign and the multiplayer mode. The split focus between the arcade mode and the more traditional modes was a brilliant decision and should go a long way toward silencing those who thought the move to EA sullied the franchise’s original feel. By focusing separately on a casual arcade mode and a more traditional single player campaign–rather than creating an awkwardly fused Frankenstein game out of both– you end up with the best of both worlds, not the worst.
It seemed like there was a general acknowledgment on EA’s behalf of the mistakes that occurred with Vanguard and a serious effort has been made to rectify those problems. There was a lot of talk of recreating and paying homage to the classic Medal of Honor feel. Medal of Honor: Heroes 2 hits the street for the Wii on November 13th, which means you’ll only have one day to cuddle up next to bee suit Mario before jumping in to slay the Axis forces mercilessly and mit vernugen.

Filed under... #Medal of Honor#War