July 8, 2011. Space shuttle Atlantis departs from Florida to cap off the US space program. It was a glorious, if not bittersweet moment. It left us asking: where do I go now to see super awesome rockets shoot off into space?

Ah, that’s where Squad’s Kerbal Space Program comes in. It has the rockets and the space, and all you need is the drive to connect the two. It’s an open sandbox where you can assemble a ridiculous space heap, or a well thought out vessel, and see how it fares the launch.

I need to start off by mentioning that this game is still in alpha. Things like objectives and missions are not implemented yet. This means that the game flows a bit more like a sandbox-style simulation. One of the touted bullet points is that it incorporates fully-fledged, physics-based flight simulation. I’m no physicist, but I do know that it means fun things can happen.

It all starts in the Rocket Assembly Building. As the name suggests, here is where you build your rocket. The tutorial is a little long-winded and wordy, but it does a good job of explaining the basics of building a rocket. The wordiness can be forgiven, though, considering how expressive you can be when slapping parts together. There are only about a handful of parts in the game at the moment, but there’s also no limiting factor like cash, either. The parts range from the pilot capsule, to breakaway joints for multi-stage rockets, to the liquid and solid fuel thrusters. 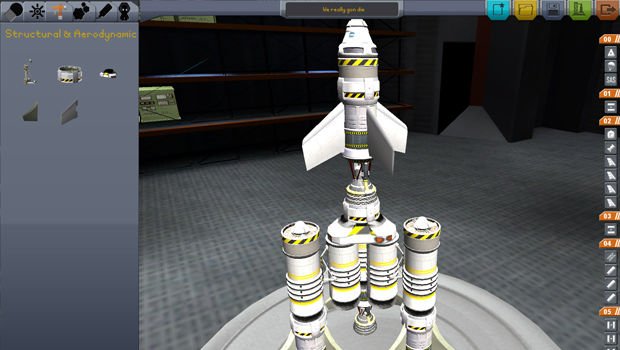 You’re also not limited by what type of rocket you make. Yes, you can create a rocket that looks and has similar construction to ones used in real life. There’s much more fun to be had finding inventive ways to make massive and oddball constructions. From what I could tell, there’s no size limitation on how big the rocket can be. The interface for attaching parts is easy to use, with large blue balls highlighting where one part can fit to another. Things like winglets can just fit onto the sides, and the game will show you what it looks like in a spot before you confirm it, so you can make adjustments without having to take everything off.

Once your rocket is built, it’s time to head out to the launch pad. Here, you can try out your rocket from a vertical launch. Three Kerbals, the inhabitants of the planet, are loaded onto the rocket. Kerbals are rather stupid, so most of the piloting is left in the player’s hands. The pitch can be controlled with the W and S keys, with the yaw controlled by the A and D keys. The rotation is controlled with Q and E. There’s another tutorial for this section, too — it’s structured much like the previously mentioned one.

You’ll have full control during launch and flight… most times, that is. Going back to the “fully-fledged, physics-based flight simulation,” sometimes you can make a rocket that is either too poorly built, or just too powerful to be properly controlled. In one sense, this makes rockets that are failures more fun. Building out, say, a wing of rockets, might actually cause part of the rocket to fling off from the main body. The twists and turns that can be caused are truly fun to behold. This is also slightly enhanced by three portraits of the Kerbal astronauts and their fearful or joyous reactions during the whole flight. 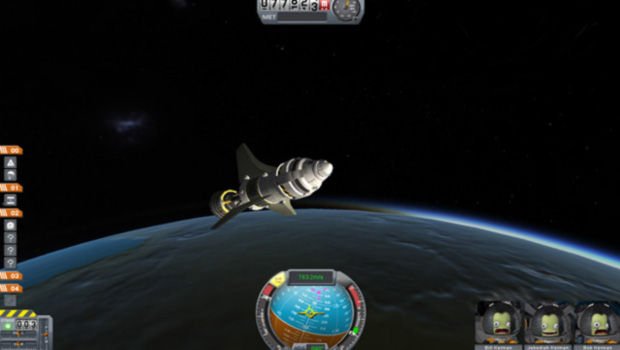 The game has little audio in it at the moment. Pretty much all there is are sound effects of the rocket boosters and explosive failures. What’s there does sound good, though. Graphically, the game looks pretty good as well. The rockets are well detailed, with each part looking — and moving — like you would imagine it should. The terrain is not that drastically detailed, though up close you can see things like trees. It works well enough, considering that you can still look down and see the planet when up at heights of tens of thousands of miles above the planet’s surface.

There’s not that much in the way of content currently. Kerbal Space Program does feature mod support, and already a growing modding community is making new parts. The game itself has a strong base for developer Squad to build upon.

Right now, your enjoyment will be almost directly proportional to how much you enjoy building and watching what crazy things will happen to that build. This is looking like it will be an interesting game to watch for when updates with new parts and missions are added. The current alpha builds are out for free, and can be downloaded from the game’s official website.