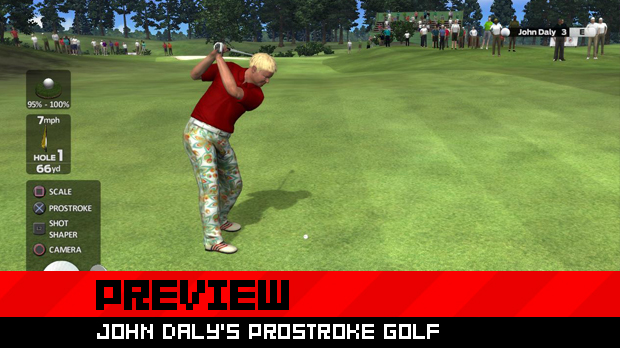 When motion control first came out with the Wii, one of the most relaxing activities to take part in was the golf game that came with Wii Sports. It wasn’t exactly accurate, and it didn’t always work right all the time, but it was an enjoyable and leisurely interpretation of the sport.

That was a few years back, and now we’ve got games like Tiger Woods for the Wii with Motion Plus support, and things are a lot more complicated. Even more, the PlayStation Move is coming out, and that little device is clearly capable of doing the same amount of stuff as Wii Motion Plus, all tied up in a little HD bow. So golf games are clearly going to support this device, and one of the very first ones is John Daly’s Prostroke Golf. It’s a fully featured game touted by the accuracy of realistic controls. With motion controlled golf headlined by John Daly, the original bad boy of the sport, I’m sure you want to know how it stands up? Follow the jump to find out.

John Daly’s Prostroke Golf is the technical sequel to the Prostroke golf series last seen on the PS2, PSP and Xbox. The addition of John Daly is important, as other than Tiger Woods, he’s one of the most well known golfers in history, with a unique play style and a perchance for drama. Serious, the man has been married four times, dealt with alcoholism, weight problems, and a whole lot more, and is widely considered the comeback king of golf. Between his outrageous personality and his crazy line of wild Loudmouth golf clothing, Daly has his mark well and true on the game.

While Daly himself is playable on the 16 original courses (with some based upon British courses), players will also be making their own character. Nothing particularly remarkable about this, but it’s a nice addition that you can even dress your character up in crazy Loudmouth branded clothing that look like quilts. Seriously. Expect DLC of clothing and character options, surely.

As far as basic gameplay goes, players will be using the Move controller to indicate and line up their shots on the course. There is a smallish checkerboard grid that both indicates the angle of the course, as well as indicates the general area the ball will go if hit straight on. Moving this grid about is easy, although it is a little sensitive. Most players initially tug the trigger and swing about the course, when a gentle pull and slow motions get the job done.

While motion control is important for lining up your shots, the actual swing gameplay is much more important. Players will enter a first person perspective looking down at the ball. From there, they can step closer or farther from the ball to put on some top or back spin, twist their wrist to open or close their shot, as well as practice how they want to hit the ball. Pull the trigger, and then the game measures how far back you pull back your swing, how vertical your club is, and how fast you rip through. Depending on how you hit the ball, your angle, how close or far you are standing, and a whole lot more the ball can go anywhere. However, it was pretty clear how to clean up your shot, and before long, we were pulling off courses at par.

For anyone who needs a little assistance, there is a training mode in which John Daly himself will guide players through technique. Apparently the first time he played the game, he did an amazing job on the courses, so the technique in the game is strongly based upon real world skills. Right now, it does take a little getting used to the controls. The Move controller has a lot more buttons than the Wiimote, so it is easy to accidentally press the wrong button, or when you need to calibrate the device (a surprisingly common occurrence) you would press the wrong button. Thankfully, fifteen minutes of play made this a non-issue, and I was in control of everything no problem.

Coming away from the motion control, I was pretty impressed. Unlike the Wii experience, it really did feel much more accurate and realistic. While the character models and general graphics are not the most impressive, the gameplay feels solid and functional. It doesn’t feel like the game ruins shots that should have been perfect, and there is a lot of flexibility to modify how you want the ball to go. Plainly, it just feels nice. That’s a good thing for a golf game.

In addition, if motion control isn’t your jam, John Daly Prostroke Golf will be coming to the Xbox 360, as well as the PC. However, if you’ve got the PS3, this would certainly be the version to get.