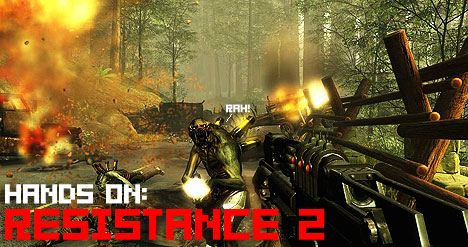 “This is the biggest game and the best game that we have ever made,” Insomniac’s Ted Price told a room full of journalists of the upcoming PlayStation 3 exclusive, Resistance 2.

Price admittedly is a bit biased when it comes to the quality of his studio’s games, but it certainly does have a long legacy of solid titles under its belt. From the PlayStation 1 platformer Spyro the Dragon on to Ratchet and Clank — one of the defining franchises of the PlayStation 2 — Insomniac has consistently delivered impressive and imaginative titles.

When Sony launched the PS3 back in 2006, Insomniac was there with Resistance: Fall of Man, a game that stood in stark contrast to their earlier work. A gritty, sci-fi shooter, Resistance was (and is) a stand-out title for the console — a solid all-around shooter — but didn’t necessarily bring anything new to the table. With Resistance 2, set to ship on November 4, Insomniac hopes to change that.

“Our goal was to take a lot of bold steps away from Resistance 1,” Price told us. “and in particular, we wanted to do some things that, basically, other games weren’t doing. We saw this opportunity to step out in front of other first-person shooters by offering features that, again, nobody has.”

We had a chance to go hands on with a pre-Gold version of Resistance 2, and these “bold steps” Price speaks of are obvious. And it shouldn’t really be a surprise that, like most of Insomniac’s work, Resistance 2 is shaping up to be an impressive and polished title.

In many ways, Resistance 2 can be looked at as three separate games. So let’s look at each part individually … 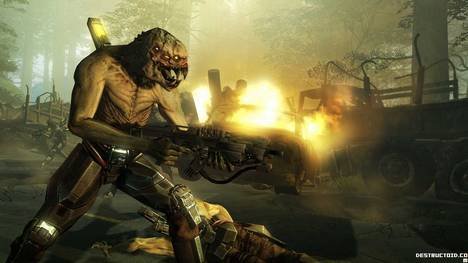 Resistance 2’s single-player campaign begins, literally, right where the last game left off. Don’t worry — I won’t spoil much for those of you who haven’t braved the alternate-history 1950s war on mankind, waged by the alien-like Chimera.

Suffice it to say that the game’s lead, Sergeant Nathan Hale, just barely survives the ordeal of Fall of Man. In Resistance 2, the Chimeran invasion has moved towards the United States in the form of a full-scale assault. Hale, infected with a Chimeran virus that gives him unique abilities, hooks up with a group of soldiers, known as “The Sentinels,” who are all afflicted with that same virus.

Insomniac had two fully playable levels at their press event, one of which is the game’s very first level, which takes place in Holar, Iceland. This introductory level not only will show players the ropes, but also hints at a lot of what Insomniac are aiming for with their sequel — a focus on variety, pacing, and variation.

The Iceland level has Hale and a team pushing to get inside a base, fighting off Chimeran foot soldiers as well as being tasked with taking down an enormous Chimeran Goliath. Running through the area, you’ll come across a number of different areas, all of which have a unique look and feel: wooded areas, a war-torn camp, and an underground passageway, just to name a few. The battle rages on quickly and seamlessly, with little time to rest, and when you do so it’s only to take a shot at the Goliath’s exhaust boards with a heavy-duty rocket. 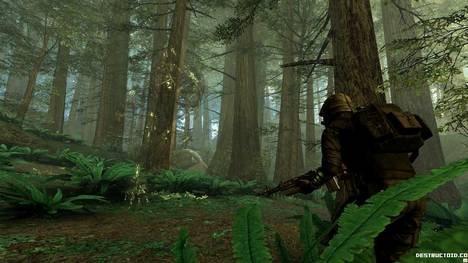 Also playable was Orick, California, the game’s third level. Hale and the Sentinels have been tracking a floating Chimeran battleship across the U.S.A.; having done some damage to the ship, it stops to rest over the small, wooded town of Orick. It’s when some debris in the road blocks Hale and company’s path that all hell breaks loose. The Chimera launch an attack on the team, blowing up their transport and killing dozens of soldiers. When Hale (and you as the player) come to, thick clouds of smoke blind you; the only thing to guide him is flashes and sounds of Chimeran gunfire.

Considering the intensity of the game’s opening level (where you have to take out a hulking metallic beast), it’s impressive that the battlefield of Orick is even more intense, hectic, and in many ways, more frightening. Chimeran soldiers come in waves out of the smoke, attacking from every angle. At one point, a camouflaged enemy (the Chimeran Chameleon) quickly appears, only to tear one of your comrades in half right before your eyes.

Oh, and now might be a good time to mention it — Resistance 2 is a bit more violent than the first game.

“We have a commitment to a little bit more blood in this game,” Ted Price told us as he points out chunks of a carcass — human or Chimeran, it’s impossible to tell — lying in a patch of dirt. 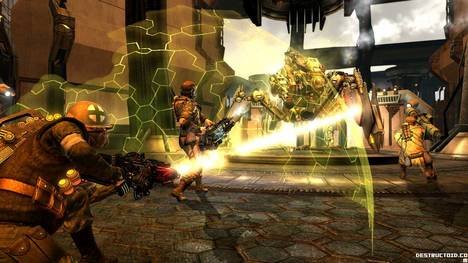 Resistance 2’s lead cooperative designer, Jake Biegel, told us that he’s convinced that Insomniac is going to revolutionize online cooperative gaming with the upcoming title. After spending some time with the mode, it’s not hard to see why he and the rest of Insomniac are so confident.

It’s not a joke — Resistance 2 features a cooperative mode that supports up to 8 players simultaneously online. Not simply the single-player story with eight players dropped into the action, the cooperative mode is designed to complement the single-player story, with each map having its own story arc that’s designed to enhance a player’s understanding of the lore of the Resistance universe.

Playing cooperatively, you’ll have a choice to play as one of three classes — soldier, medic, and special ops — each with four unique armor and weapon upgrades. Not simply cosmetic (although you’ll be able to tell one’s experience by simply eyeing their gear), the upgrades offer class bonus abilities. By scoring kills and providing various types of support (depending on your class), you’ll gain experience points that can be spent towards these upgrades. It’s interesting to note that XP can be gained across all of the game’s modes, and can be distributed as you see fit.

Each class will play a unique role in co-op, forcing each player to truly work together. Soldiers act as the front lines of both defense and offense, with the ability to throw up a shield to protect from incoming fire. Medics, as you’d expect, provide support for health. The main purpose of special ops is to drop ammo, constantly supplying munitions for the team. 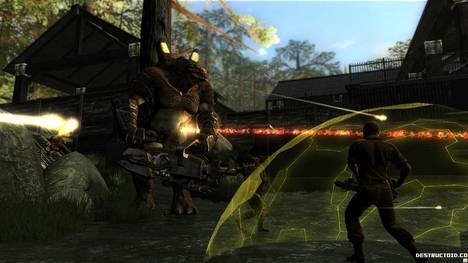 After a short (and successful) play-through of one of the game’s cooperative levels, it was obvious that working together was the only option for survival. As a soldier, I was front and center of most battles, and only survived when I stuck close to my teammates. It was way too easy to run out of ammo or find myself low on health and in a head-to-head battle with a group of Chimera. It quickly became obvious to everyone in the play-session that working together would be the only way to survive. And with that given, there was plenty of communicating (a.k.a. screaming) as we worked our way through the hordes of Chimera.

With that said, the success of Resistance 2’s cooperative experience is really going to depend on who you’re playing with. Hopping online and getting paired up with someone who isn’t a team player will end in disaster. Start finding seven other PS3-owning friends who plan on picking up Resistance 2 now … 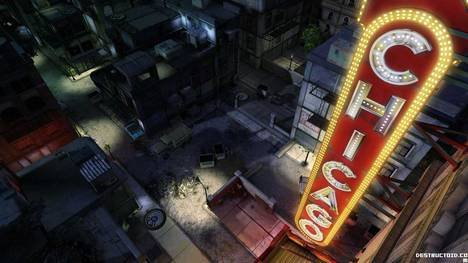 One of Resistance: Fall of Man’s great strengths was its popular competitive multiplayer. While Insomniac could easily have delivered more of the same — added some new weapons, some new maps — and called it a day, they’re taking some pretty big leaps with how they’re approaching multiplayer.

Resistance 2 will support 60 players online, which could lead to a couple of things. First, a hell of a lot of lag. The good news is, playing in a game with over 50 players (including Insomniac staff members across the country), we experienced no lag. Secondly, 60 players could mean a lot of confusion — with that many players on the screen at once, good luck figuring who’s doing what, much less what you’re doing.

Insomniac has solved the later problem by offering up a squad- and objective-based competitive multiplayer experience, known as the Skirmish. This mode not only demands teamwork, but helps create a more intimate experience while playing some the game’s larger maps. These objectives can change over the course of a single game, and are based on a number of in-game conditions, such as who might be winning or losing. Some of the examples include protecting or taking a control point, or having a certain player “marked” for death. By protecting (or taking) said control point or by protecting the “V.I.P” in your squad (or taking them out), you’ll earn more (or less) experience points. 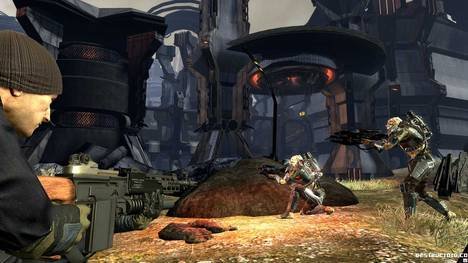 Within a single match, XP points can be spent on something called “Berserks.” As Insomniac explains it, “Berserks” are power-up moments, gamebreakers that can turn the tide of a battle. Once enough XP has been gained to build up a “Berserk,” it can be activated by simply pressing down on the d-pad. These special powers include invisibility, buffed ammunition, healing rings, and more. By using Berserks at the right time, and combining them with different weapon sets (the mini-gun plus a shield, or an adrenaline Berserk with the fast Bullseye weapon), you can customize your character to your own playing style on the fly.

Understanding the changing goals and objectives wasn’t an issue; they’re all very clearly marked on the HUD and don’t change so often as to confuse the player. Using Berserks, on the other hand, took a bit of practice; knowing what Berserk and when to equip it was a challenge, but only over the course of the few quick games I had a chance to play. On more than one occasion I found myself deploying Berserks and saving my (or a teammate’s) ass, and it definitely felt rewarding. 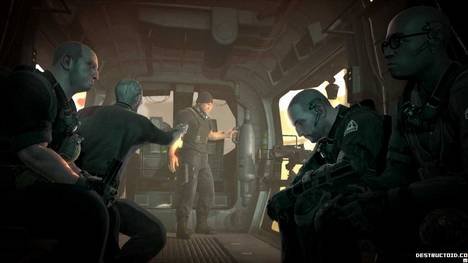 I didn’t think Insomniac would deliver anything less than a solid, worthy sequel to the original. But even I’m caught off guard by how much work they’ve put in to trying to make Resistance 2 a title that not only stands apart from its predecessor, but also other games in the genre.

People always cry that they’re looking for something new, but get scared and run away when they see something unfamiliar. From what it looks like, Resistance 2 is offering up a little bit of the old, but a hell of a lot of (really pretty looking, if I might add) new. Single-player, competitive multiplayer, eight-player cooperative mode … throw in the promised gore and PS3 Trophy support, and we might be looking at a winner.