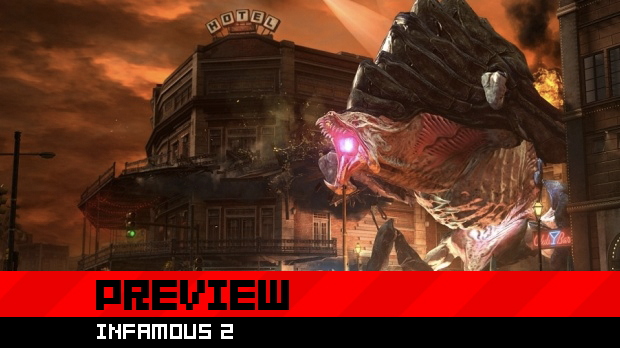 I don’t follow sports, but I know there’s some kind of most improved award that they give players. From what I’ve seen so far, the gaming equivalent of this award would have to go to inFAMOUS 2. I thoroughly enjoyed the first game, but it needed some polish and attention. Judging from what I saw at a press event last night, Sucker Punch went above and beyond for inFamous 2.

This is how you do sequels, folks. 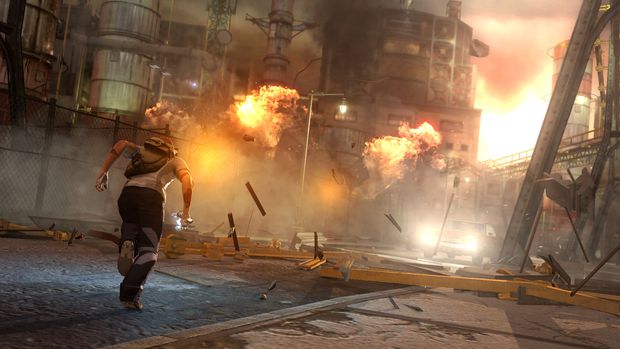 It’s hard to pinpoint what exactly has changed from the first inFamous game when talking about the “feel” of the game, but I can say that it feels better as Cole seems to get around better in inFAMOUS 2. Movements seem a bit more fluid and smooth, and it seems easier to determine how you’ll latch onto poles, buildings and other interactive areas.

The camera shows marked improvement too. No longer does it feel like the camera is fixed on Cole’s back in a limited view that requires a lot of panning, meaningless frantic spinning of the view when you feel like something is on your tail. When the game introduces something larger than Cole, like a huge boss, the camera pans out and works the scale a bit so that you can get everything important in one field of view.

With the visuals, again, it’s hard to pinpoint what has improved, but you can definitely tell they’ve worked on it. This sequel is definitely more colorful, and there’s a lot more visual appeal in the settings. inFAMOUS 2‘s world looks a bit more lively and animated, which makes it a bit more exciting to explore. 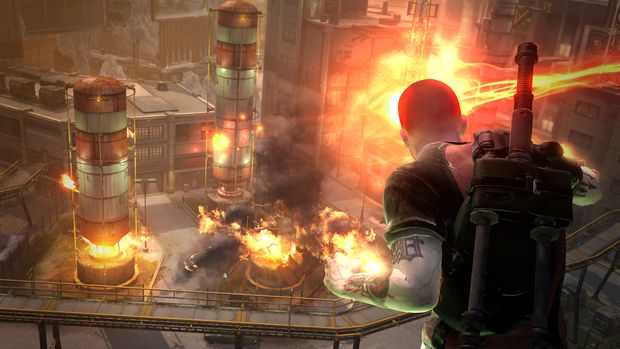 There was not a lot of story background in the single-player demo mission called Forced Conduits, but I was having too much fun blowing shit up to care. The mission has Cole out turning warehouses upside down looking for hidden safes that might contain blast cores before the enemy did. This took me to a few dead ends, but it gave me plenty of opportunity to try out new attacks. Cole’s melee attack uses a new weapon called the Amp, which adds a shock to the impact. I was also able to pull off flashy combos using cued button presses. Of course, there’s new electrical attacks, which I used to blow up anything destructible in these warehouses to find the safes.

The demo ended with a sub-boss fight against an ice-wielding beast called Titan. It was about three times taller than Cole or other enemies, and likely that much stronger, so I threw electrical attacks at it from a distance to wear it down. Up close, after taking its strength down a bit, I was able to mash a button to expose its weak point and take it down for good. This was a short but satisfying demo that showed that Cole moves better than ever. 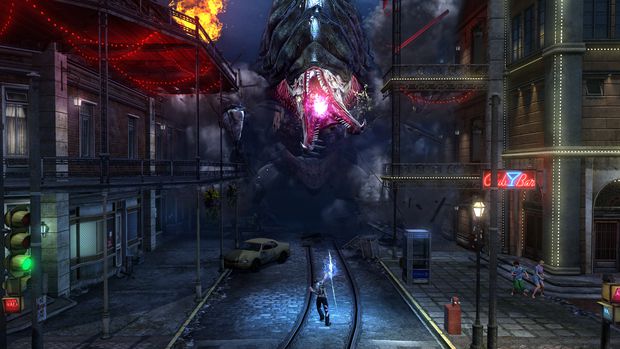 One of the inFAMOUS 2 demos I played tonight was designed to show the improved scope and scale of boss fights. Going up against a building-tall Behemoth did a great job of showing how Sucker Punch has focused their energies into bringing this franchise to a higher level. So how big is this boss? Cole himself said it best in the cinematic leading up to this boss battle: “No. Way.” This boss was so big that I had to run forward down the street, turn around, and look upward to even see it all.

Being several stories tall, the Behemoth easily plowed through buildings and and other structures in this city as it made its way down streets. You’d think its massive size would make for an easy target, but it proved to be strong against any attacks other than ones that directly connected with its weak points, which were hidden during most of its attacks. Cole’s normal attacks did a fair amount of damage to these exposed weak points, but hurling vehicles at it using his kinetic ability really did the trick.

They could have just touched up inFamous’ electrically charged sandbox gameplay for a sequel, but Sucker Punch decided on a full elevation of every game concept within. They say that they went into this game with the philosophy of leaving no game aspect unturned. This definitely shows. The ante has definitely been upped with inFAMOUS 2 and I can’t wait to play more of this game.

Filed under... #Destructoid on assignment#inFamous