After last night, THQ, I officially give you free reign to wine and dine me anytime. You see, I headed out to the New York Hall of Science in Flushing yesterday for THQ’s WALL•E event, and I had a great time. THQ held the event because they’re publishing a movie tie-in videogame for the upcoming Disney/Pixar animated film WALL•E, a movie that I’ve been very, very excited about for a long, long time.

The game is being developed by Heavy Iron Studios, and representatives from Pixar, THQ, and Heavy Iron were on hand to show off the game. As a special treat, Jeff Garlin (of Curb Your Enthusiasm fame) was also in attendance; he voices one of the characters in the film. But I’m sure you’re all dying to hear about the game itself, so here we go: hit the jump for my impressions of WALL•E.

[Editor’s note: If you’re seeing strange symbols, set your browser’s encoding (check the View menu) to something like “Windows (Western-1252)”. That should fix everything.]

Here’s a bit of background on the movie. It takes place in the future; because of Earth’s continuing population growth, it has become overrun with garbage, so humans are forced to leave the planet. They leave behind WALL•E (“Waste Allocation Load Lifter, Earth-Class”) units, robots whose job it is to shape the world’s waste into neat little cubes.

But 700 years have passed since the homo sapiens evacuated, and the cleanup effort has failed. In fact, the titular robot is the only one left. Over that period, WALL•E has developed something of a personality by examining the trash he’s been sifting through. Then, one day, his world is changed when EVE (“Extra Vegetation Evaluator”), a robot from a human recon ship, comes down to check up on Earth. WALL•E falls in love, and the story goes from there. 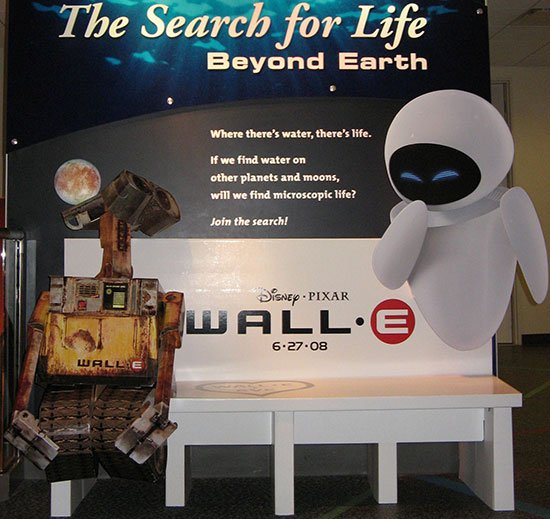 It took me a while to figure out just why THQ decided to hold this event at the Hall of Science, which is a sort of science museum. Eventually, I noticed the name of the current main exhibit, “The Search for Life Beyond Earth”, and that’s when I realized that it tied in with one of the main themes of WALL•E. The event was catered, with a decent bar (soft drinks/beer/wine) and people walking around serving hors d’oeuvres.

Although I was told that all versions of the game would be on display, THQ was only showing off the Xbox 360 and Wii versions of the game (though we were told that the PlayStation 3 version “is the same” as the 360 version). I was able to spend some time with both, and I was pleasantly surprised. WALL•E is a rather simple and linear platformer that follows the storyline of the film, but it’s pretty fun, especially on the Wii.

I played through the game’s opening level. This part of the game took the form of an obstacle course (of sorts), so there were some puzzle elements involved. On the 360, you move WALL•E around with the analog sticks, and you can jump with the A button. The idea is to create little cubes of trash (using B) out of the plethora of junk lying around. Then you lock on to these BnL (Buy n Large — a massive corporation that seems to parody Wal-Mart) targets and throw the cubes at them (R trigger) to open up your path. 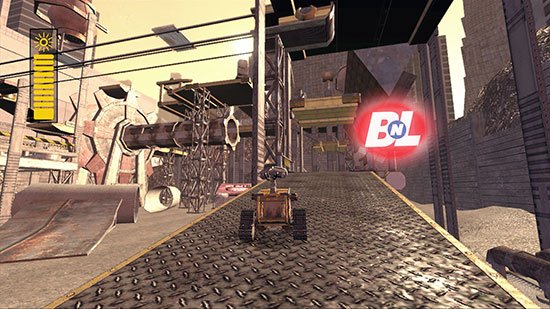 Heavy Iron explained in their presentation that, unlike many developers, they made a “concerted effort to make the Wii version feel like a Wii game”. And it shows: the controls feel pretty intuitive (you shake the Wii Remote to create cubes, and the targeting works well). Throughout the game, you’ll play levels as either WALL•E, EVE, or WALL•E and EVE together. What’s nice about this is the dichotomy between the two characters: EVE can fly and shoot lasers, while WALL•E just does his trash compacting thing.

The Wii version of the game allows you to use the Wii Zapper on shooting levels. In addition to the single-player campaign, there’s a pretty solid multiplayer component that features four-player split-screen action on most platforms (no online). In the single-player mode, you can collect tokens (“Wallops”) and other objects, which will unlock things like new multiplayer levels and skins. The multiplayer modes included a deathmatch, as well as an on-rails shooting mode that was reminiscent of games like Time Crisis (and again, the Wii Zapper can be used to heighten your fun).

The graphical fidelity of both the Wii and 360 versions was notable. On the Wii, you’ll see some pretty good particle effects when you’re making garbage cubes, and the models for WALL•E and EVE are solid. The 360 version is, of course, much more polished; the draw distance, lighting, and textures are impressive. Both versions feature a good-looking depth-of-field filter, and things come into focus accordingly when you get closer to them. 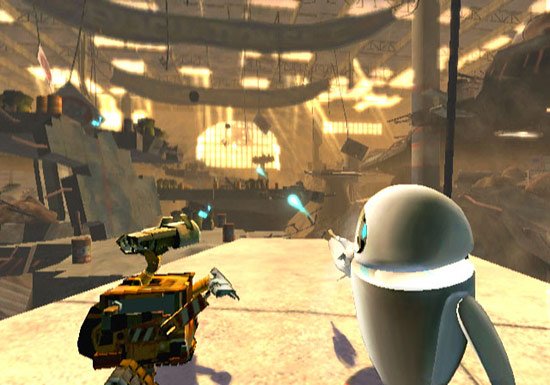 I was lucky enough to be able to briefly chat with Lyle Hall, Heavy Iron’s General Manager and the Executive Producer on the WALL•E game. He told me of the history of the THQ-owned development studio, which was formed in 1999. They’ve since become well known for their licensed games, which include such successes as 2003’s SpongeBob SquarePants: Battle for Bikini Bottom (over 1 million sold) and 2004’s movie tie-in game for The Incredibles (over 7.5 million shipped worldwide). About 120 employees work at Heavy Iron Studios, which is based in Los Angeles.

After the presentation, which included four decently long clips (around two minutes each) from the film, we headed back to the main exhibit for some dinner. And afterwards, they even brought out an ice cream sundae bar! But my personal highlight of the night was meeting comedian Jeff Garlin. He’s a very jovial and approachable man —I mentioned that I write for Destructoid.com, and he said, “Oh yeah, my granddaughter works for them.” When I joked, “What’s her name?”, he quipped, “Uh…Vagina Mountain.” Oh, what a night.