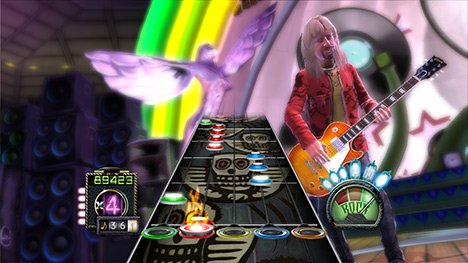 Guitar Hero: Aerosmith has been accused, like Guitar Hero: On Tour, of being yet another quick cash-in attempt for the Guitar Hero franchise (see also Guitar Hero Encore: Rocks the 80s). But looking at it another way, an artist-centric music game is quite a gamble. For many gamers — at least, those who aren’t die-hard Aerosmith lovers — the likelihood of shelling out full price for this, which has an approximately 60/40 split between Aerosmith songs and non-Aerosmith songs, is low.

Still, the hard rock band has sold over 150 million records worldwide since being formed in 1970, so it has a pretty sizable legion of fans. And according to what the developers kept emphasizing while I was playing the game last Wednesday in San Francisco, Aerosmith is legitimately interested in the videogame medium and was involved in the process of making the guitar game that will bear the band’s name. So how did my time with the game go? Click on below to find out.

If you’re not familiar with the basic mechanics of Guitar Hero by now, you must have been living under a rock for the past three years. On-screen fretboard, guitar-shaped controller, primary-colored buttons, strum bar, Star Power — you know the drill. In fact, Guitar Hero: Aerosmith bundles will ship with the same Les Paul guitar controller that came with Guitar Hero III (except for the PS2 version, which will have a Kramer Striker controller again). But if you do end up buying the bundle instead of the game disc alone (PS3/360/Wii), you’ll get a super-special bonus: an Aerosmith faceplate!

Neversoft is also keeping many other things from Guitar Hero III — that’s good in some cases, and bad in others. The mechanics are identical; there’s still that noticeably longer window for hitting hammer-ons and pull-offs, and the Les Paul controller was still a bit too tilt-sensitive for my tastes (unfortunately, the position in which I play the guitar naturally tends to move the neck upwards, and that engages Star Power when I don’t want to do so). I couldn’t notice any difference in graphics, either, and the HUD is the same.

To my dismay, Steven Tyler isn’t the only gaping-mouthed vocalist in the game — the insufferable long-haired, black-wifebeater-clad singer from the last game also returns. In addition, the character list that I saw consisted entirely of series regulars, but with a twist thrown in: Axel Steel, Casey Lynch, Izzy Sparks, Judy Nails, Johnny Napalm, Lars Ümlaüt, Midori, Xavier Stone, and (pause for effect) … D.M.C.! No, not Devil May Cry; I’m talking about one-third of the pioneering hip-hop group Run-D.M.C., whose groundbreaking collaboration with Aerosmith on “Walk This Way” is featured in the game. It’s pretty hilarious to see him rocking out on stage with a guitar in his hands.

The game’s career mode takes the form of the now-standard tiered setup, with five songs per tier, as usual. We got to see five of the game’s song tiers, though we were told that the full game would have 41 songs in the main setlist and “a lot of” unlockable tracks as well. But because it’s an Aerosmith game, there’s some intra-tier structure, too. The first two songs in each tier are “opening acts” — they’re songs from other artists who influenced Aerosmith, worked/toured with them, or have been influenced by them. The latter three songs are always Aerosmith songs.

Most notably, all the Aerosmith songs are either master tracks or have been re-recorded by Aerosmith specifically for this game (an example of the latter is “Dream On”). You’ll be able to tell the difference because the song selection screen displays the year in which the song was recorded. Unfortunately, there’s one cover per tier (except for tier 5) from what we saw, though they’re solid for the most part.

Aerosmith’s involvement in this game was something that the developers highlighted. Apparently, the band was highly invested in the quality of the game; Karthik Bala, the CEO of Vicarious Visions (the developer of the Wii version of the game), told me that Aerosmith didn’t want to release a bad product if their name was going to be associated with it. To that end, the band came in and did motion capture work for every single song of theirs in the game. So when you play an Aerosmith song in the game, you’ll see the band on stage performing it, and that’s actually them moving around — which is pretty cool. Their animations are noticeably better than the stock band’s movements, too.

Bala also discussed the band’s passion for their work. According to him, Aerosmith signed on to do this game because they see videogames as a newly viable medium for creative expression — as something that can further extend their music and bring it to a wider audience. Bala drew comparisons between videogames and music videos, saying that the consoles are serving the same purpose that MTV did “back when it was good.” Whether or not you want to indict Activision for “milking” the Guitar Hero name, I feel as if this can only be good for the videogame industry.

The career mode in Guitar Hero: Aerosmith has been given something of a facelift. Just like Guitar Hero III, it includes little vignettes between tiers (and at the start) of play. However, in a cool touch, the segments feature the real-life band members themselves; the opening one shows them fondly recalling their days at Nipmuc High. The videos aren’t in HD, but it’s probably better that way, considering the band’s grizzled and wrinkled appearance — that’s what the rock ‘n’ roll lifestyle will do to you. The career mode follows the band’s rise to fame, and you’ll see them relive the good days as you progress through the ranks.

As for my opinion of what I played, well, it’s essentially Guitar Hero III — but with Aerosmith songs. There’s not really much else to say. I can’t legitimately say that the formula has gotten stale — I’m not gonna lie; I’ve always wanted to play “Walk This Way” in Guitar Hero or Rock Band, and this game makes that dream come true. The multiplayer modes are the same as in Guitar Hero III, but again, there is the Aerosmith-ized career. Still, I feel like the asking price ($99.99 for PS3/360/Wii bundles, $89.99 for PS2; $59.99 for PS3/360 standalone game, $49.99 for Wii/PS2) is a bit high, considering the 41-song setlist. Let Activision know what you think when the game comes out on June 22nd.