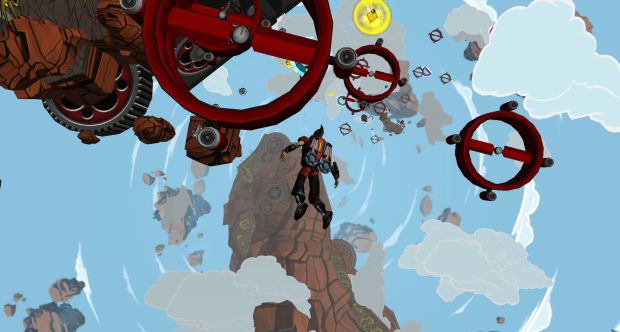 Afraid of heights? Can’t climb down a ladder to save your life? Would you rather eat dirt than step one foot into a roller coaster? Well suck it up, buddy. This game isn’t for the weak of heart.

When I met with the HFDD team at WonderCon 2011, they seemed excited but nervous to hand over their iPad in order to give me a taste of their game, stressing that it is in an “extremely alpha, alpha, alpha” stage. 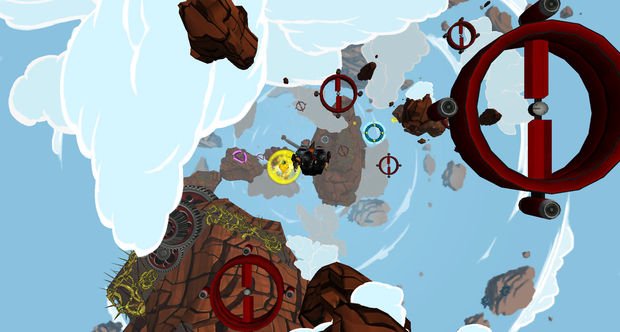 HFDD is a primarily tilt-based mobile game that relies on the sensitivity of your device to steer you left or right, send you nose-diving through the environment, or slow you down for more maneuverability in order to avoid obstacles. A simple tap to the screen deploys your jetpack and will allow you to fly safely upon floating platforms. Activate your jetpack too late and it will overheat and explode! But for those of you lucky enough to land healthy and whole, these platforms will act as checkpoints while you progress through the highly explorative world of HFDD.

But why do you need checkpoints? HFDD isn’t some bubblegum candy game where you’re happily prancing through the air while tra-la-la-ing through one level to the next. You’re probably going to die! While thorough details concerning the storyline are pending announcement closer to the predicted release date (sometime in Summer 2011), President and Creative Director, Jason Alejandre, was still able to let this little tidbit slip. 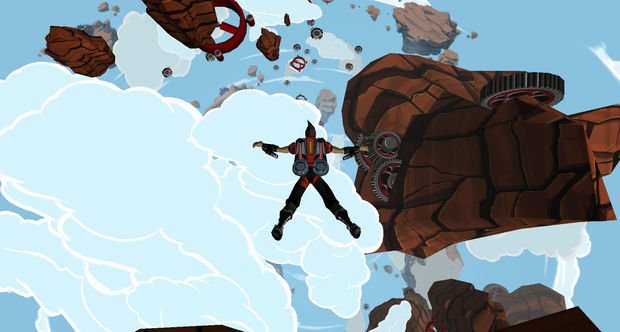 “We can’t tell you much about the plot of the game at this point, as we’ll be revealing more about the plot, characters, and world of HFDD over the coming months. All I can really say is that our protagonist — a treasure hunting member of the Death Defyer squad — starts out as a bit of an anti-hero looking for fortune, sort of like Han Solo, but ends up discovering something much larger and far more sinister. The details of the plot — and the sinister force — will be unveiled soon.”

Alejandre mentioned three different worlds in HFDD, each containing 10 different levels. In the level I was able to explore during WonderCon, I found myself barrel rolling past menacing red propellers that threatened to chop me into delicious little pieces of man-flesh (though a simple swipe across the screen was enough to twirl me out of harm’s reach.) I also steered myself through blue stealth rings which, at the time, I mistook for “power ups”, but was later able to clear up with Alejandre.

“The stealth rings are really there to protect you from detection by the bad guys and, from a gameplay perspective, to get players to fully explore each level, instead of just nose diving straight to the bottom. So they aren’t exactly power ups, per say. But, in addition to the O-shaped stealth rings you saw, there are harder-to-find D-shaped rings that take players down an alternate path for extra treasures, challenges, and replayability.” 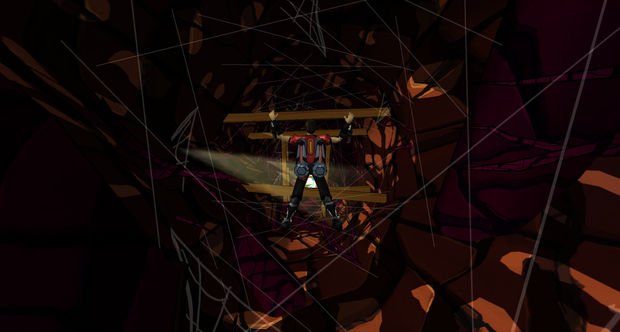 Being the sort of player who enjoys exploring and searching out those little hidden Easter eggs or glitches that you can only find by veering off the predicted path, it was cool to hear that Game Mechanic Studious had sorted out this little detail and catered to my particular audience.

After getting a taste of the game for myself, Alejandre showed me a quick animated preview of a mechanical beast perched atop a floating rock, amused when I immediately began firing off questions about the monster, asking about its origins, how he plans to incorporate it into the game, and what its purpose within the story would be.

Is it there to help us in the game? Are there more of them? Alejandre replied with, “The mechanically-augmented beast is indeed your ally, and he’ll help your hero in navigating the world, escaping bad guys and advancing the plot, but I can’t reveal any more than that for now. We’ll have more announcements about the ally beast — as well as other huge monsters and the roles they will play — closer to launch.” 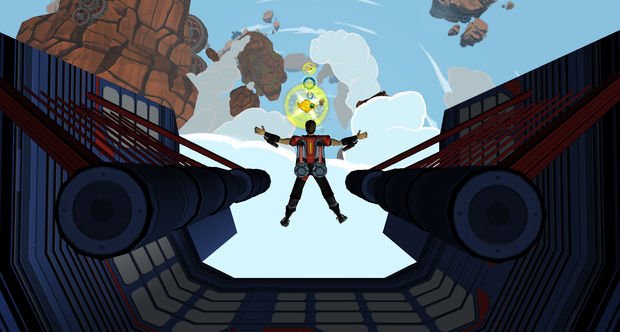 Navigation in HFDD is incredibly simple and responsive, and the controls are easy enough to pick up and execute. Meaning your grandma will probably even get a kick out of it. Speaking of sharing, I did inquire for us social game types about whether or not we’d be able to compete with friends via leaderboards or social media networks, etc. To which Alejandre replied, “We’re exploring every possible option for scores and leaderboard tracking and will integrate those wherever appropriate. We really want to encourage players to challenge their friends and other Death Defyers through the social channels, so you can post your fastest time and be like, “Beat that!” Or if you earn a really tough trophy, be all, “Can you do it?!” We like that community feel, and want it to be more present in mobile gaming.”

After only two months of development (including art direction, level design, controls, and engineering), High Flyer Death Defyer is already shaping up to be something uniquely special. While certain parts of the game definitely remind me of flight navigation favorites like Star Fox or Jak & Daxter, there’s just enough originality to make this title distinct. I was surprised by the level of detail they had put into the smallest of animations. For example, I was fortunate enough to be able to view one of the supposed many death animations when HFDD glitched for a moment (something I’m sure they’ll be working the kinks out of during further development).

I’m looking forward to seeing how they integrate social media into the game (as this is definitely a huge part of mobile gaming nowadays.) I’m also looking forward to discovering more about who our protagonist is running from, what sort of cool treasures he might collect, and what other awesome equipment and allies he might run into during his adventures (if any).

High Flyer Death Defyer should be available via iPad, iPhone, iPod Touch, and Android, with a release date aimed for Summer 2011. There’s no announcement on a final price point yet, but it will be competitively priced as they are eager to get the game into as many hands as possible. With that said, does HFDD look like your cup of tea? What do you hope to see out of this game?