The first thing pretty much everyone notices at this year’s PAX Prime are the several dozen massive banner ads for Firefall, a free-to-play MMOFPS/TPS and the first project of Red 5 Studios. Firefall was first announced at last year’s PAX Prime and playable earlier this year at PAX East.

I got to play for an hour or so, and I came away feeling like it was a fusion of Unreal Tournmanet 2004 and Borderlands. There are a few different modes, including instanced eSports maps for the competitive folks, as well as a persistent universe that gives players dynamic missions based on what is going on in the game world. 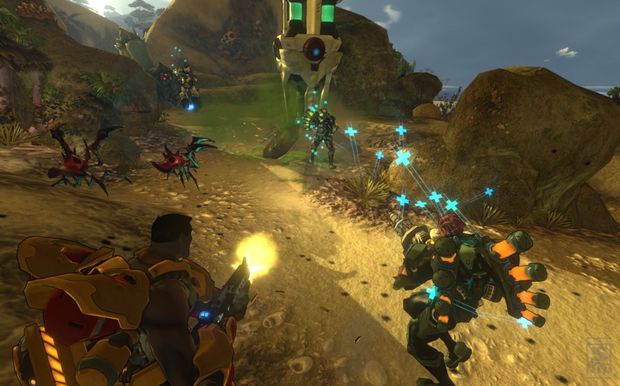 The “campaign” centers on a conflict between humans and an AI-controlled alien faction known as the “Chosen.” Periodically, the Chosen will attempt to capture player-controlled cities and outposts by taking out communications and sweeping in with dropships. The players attempt to repel these invasions by protecting generators and antennae, using massive turrets to fight off the Chosen’s battleships. If the humans succeed, they are well-rewarded; if the players lose the aliens maintain control of the area and will need to be pushed out eventually.

There are several classes to play and they include a medic, heavy weapons, and sniper. Each class gains skills as they play and upgrade their equipment. For example, when I started playing I had one relatively weak rifle with a one-off ability that allowed me to load up a sticky explosive rounds. Within about 30 minutes, I acquired a rifle that could rapidly fire about a dozen of those sticky rounds. It radically changed my play-style. Instead of hiding out and picking off foes from afar, I could get in close and take out scores of them quite easily. And because all players have jetpacks, anytime I found myself a bit overwhelmed, I could simply fly away. 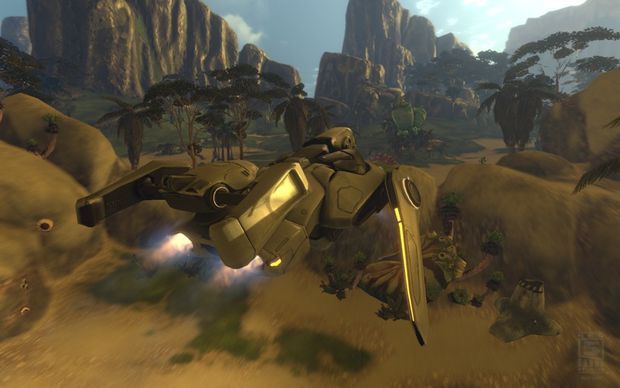 After logging quite a bit of time in the “MMO” side of Firefall, I hopped into an instanced PvP map. Much like World of Warcarft’s battlegrounds, all of your items and equipment from the overworld carry over into PvP. You’re also given similar dynamic objectives to accomplish with the rest of your team that reminded me a bit of Team Fortress 2. I had a pretty good time with it, and found myself shouting more than a few obscenities in both excitement and frustration.

Firefall still has a few months to go before it launches this winter, but what I saw was really tight. The game itself is gorgeous, and everything just felt smooth. The learning curve is very generous, and I was able to pick it up quickly, coming away from it with a really solid understanding of a lot of the basic mechanics.

There’s a lot of talent behind this project, including the project lead for World of Warcraft, so it’s a safe bet to keep this one on your radar.