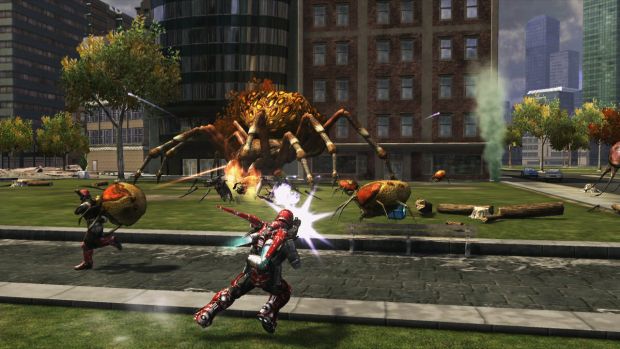 Earth Defense Force is a very beloved series here at Destructoid. Various members on the team, especially Colette Bennett, adore this franchise to death. I’ve never played any of the games before so I’ve never quite understood the appeal.

After checking out Earth Defense Force: Insect Armageddon though, I totally get it. I now see why this franchise is so loved and fans are going to really dig the new improvements and changes. Better graphics, online co-op, Horde mode and more are all detailed below.

[Update: Forgot to mention, don’t expect to hover around in the air constantly with the jetpack like in the videos. The jetpack and weapons will use the same rechargeable energy bar in order to work.]

The new EDF has been in the works for over a year and one of the first things D3 Publisher and developer Vicious Cycle did was look at all of the fan feedback on the past games. Joe Fletcher, Producer on Insect Armageddon, told me that they “looked back at what all the fans said about the game, took the elements that we could and actually were implementable, see what we could do about putting them into the game and make the game better because of it.”

Some of the changes are big, but don’t let that scare you. The serious, but cheesy B-movie-like feel will be present as ever. The biggest change to the series is the inclusion of drop-in/drop-out online three-player co-op. Lacking friends, two AI-controlled bots will always fight alongside you throughout the campaign and they’ll actually be helpful. 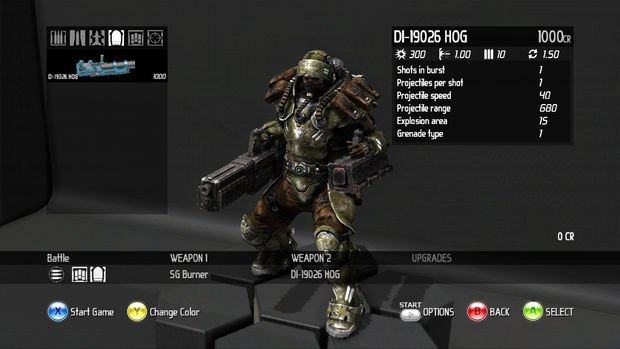 The story (not that it’s actually important) sees the Earth Defense Force in the city of New Detroit taking on the biggest insect invasion the planet has encountered yet. Giant ants, spiders, wasps, robot mechs and more are all laying waste. Luckily for the EDF, they have new special armor, vehicles that don’t control like shit anymore and over 150 weapons to utilize against the invasion.

Before every level, players will select their EDF’s armor ability and two weapons to take into a battle. There’s the tank-like armor that makes players slow but they’ll be able to take more damage. They also have a special energy shield that they can deploy. The jet armor let’s a player fly in the air. The tactical specialty is the most balanced of the four and they’ll be able to place turrets. The trooper class doesn’t have much in armor, but can inflict a lot of damage.

Players score points in the campaign that can be spent in upgrading an EDF’s stats such as their armor, hit points, increase their energy, etc. The points will also go into upgrading and purchasing weapons from the weapon’s shop. Oh yes, there will be an equivalent to the Genocide Gun that will let you destroy the hell out of everything. And on the subject of weapons, there’s now a Gears of War-like quick reload feature. 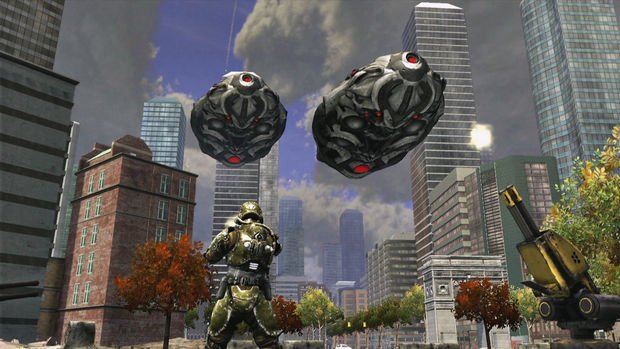 Another big change — as evidenced by the videos above — is that Insect Armageddon looks great, especially for being an EDF title. Everything in the game is destructible and buildings will crumble in more varied ways depending on how the building is hit. Up to 80 enemies can appear on the screen and the game will keep running smoothly at 30 frames-per-second.

The main campaign will take players on average about eight hours to complete on normal mode. There are different difficulties, including the insanely hard Inferno mode. There will be lots of reply value too, especially when it comes to unlocking new weapons. Expect to see some DLC down the line as well.

Additionally, there’s going to be a six-player “Horde” mode where endless waves of enemies will attack you relentlessly. There’s also a Remix mode where random enemies will spawn instead of the normal enemies that appear during the Campaign.

Like I said earlier, I totally get why this series is so much fun now. It’s cheesy, over-the-top fun and a breath of fresh air in a market that’s just saturated with super-serious shooters.