Last week, I did something I’ve been wanting to do for a while: I played Duke Nukem Forever.

I’ve been looking forward to Duke Nukem Forever since I was twelve, and for a number of reasons, it’s taken a whole twelve years to make it. Duke Nukem Forever could’ve been one of the most anticipated games of all time, but I think a lot of peoples’ excitement has turned to sour grapes from so much waiting.

Writing this preview is difficult, because I’m still fanboyishly excited, but I’m trying to keep a level head about it. 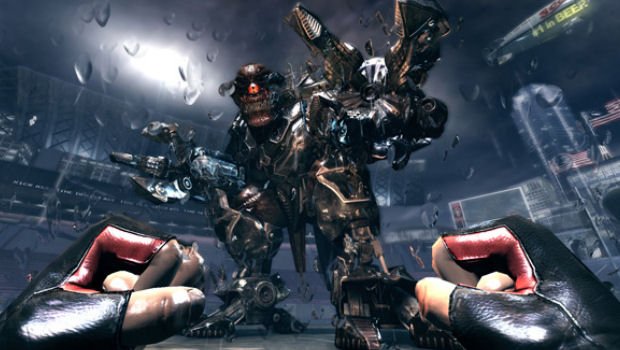 You’re Duke Nukem, and you’re sitting in your lavish penthouse apartment playing a video game about yourself. Two blondes in schoolgirl outfits have just finished blowing you, because hey, you saved the world that one time. After giggling about how going down on you was fun, they ask if the game was fun “Yeah, but after twelve fucking years, it should be.” All this got shown off a while ago during a live Gearbox demo, which you can see here. 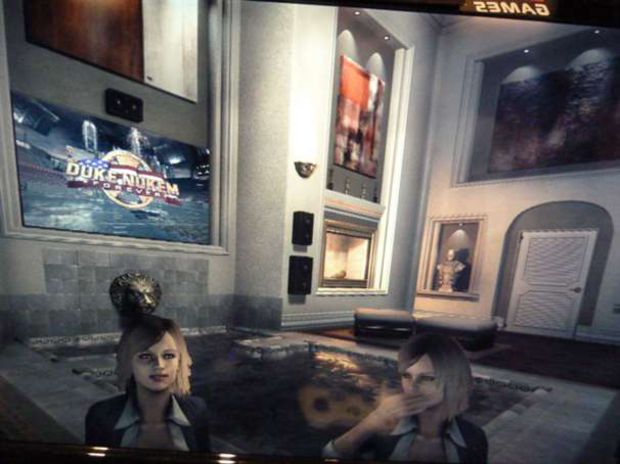 Duke Nukem Forever is a fun game that appeals to me in the most juvenile and adolescent of ways, but to write it off as just a dumb “let’s drink beer and shoot stuff” video game is unfair. It’s a good tongue-in-cheek satire of American action movie tropes, and it’s also a respectable piece of pop culture in itself. You know how Shaun of the Dead is a parody of zombie movies, but at the same time, it’s also pretty good zombie movie? Duke Nukem Forever is a little like that.

The premise is as simple as you can get: Aliens invade, and they’re assholes. They’re not calculating or evil, they’re just obnoxious. The first time you fight them, it’s because they’re using your gym equipment. But then they start kidnapping women, and obviously, that is NOT okay. 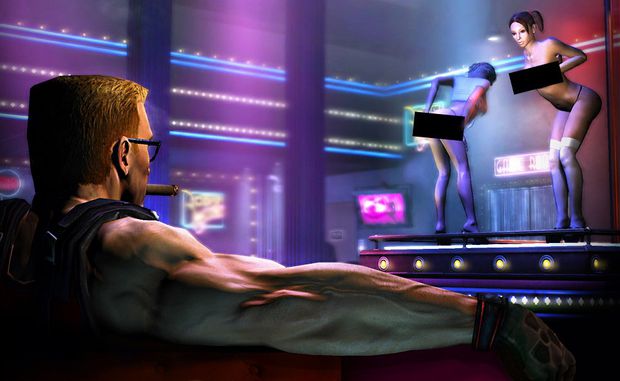 One thing I have to praise the game for is its simplicity. There are no cinematic cutscenes jamming introductory backstory down your throat; you’re Duke Nukem, and aliens are jerks. That’s the premise of the game. Any exposition is delivered through NPCs talking to you, which they generally do in a ludicrous B-movie manner. “Holy fucking shit, Duke! The President’s gonna shit his fucking pants when he sees this!”

There’s no tutorial scene that teaches you the controls and makes you prove you understanding of them before proceeding. Onscreen directions say “Press X to pick an object up, press RT to throw it.” If you can’t figure that out, tough shit. There’s no watered down introductory mission to ensure you’ve figured out how to operate your controller. This is refreshing. 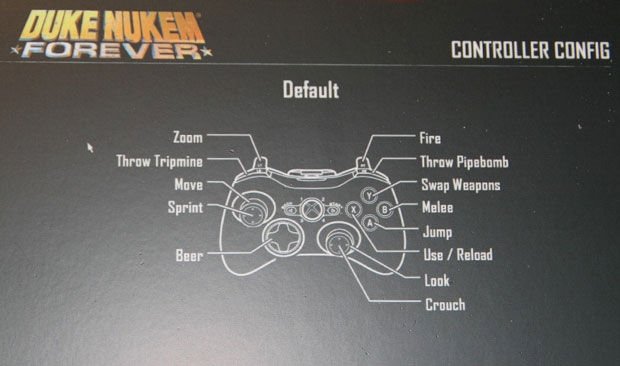 Speaking of controls, the above photo is what we’re dealing with. Pretty straightforward. Being the fanboy I am, I’d already memorized this layout from pictures I’d seen online before I went to play, specifically the “beer” button. Most of the functions here should be self-explanatory, but I’ll elaborate on a few.

Your melee attack is punching or swinging the butt of a weapon. It’s got a great feel to it. It came in handy a lot during the game, since some of the enemies are pretty quick, and sometimes you’ve gotta punch ’em in the face.

Weapons I played with included the pistol, shotgun, ripper (triple-barrelled machine gun), alien laser, alien commander laser, devastator missile launcher, and the RPG. The RPG felt just like I remembered it, except now it’s got a lock-on feature. Also, with the shotgun, you can shoot limbs off. It’s pretty awesome. 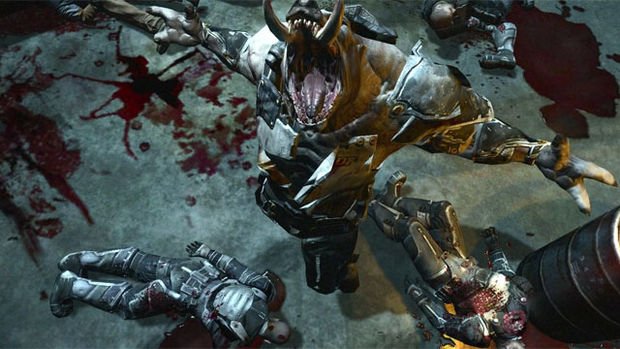 The D-Pad is used to activate items and equipment, of which you’ve got three options: Steroids, Beer, and Dukevision. Steroids should be familiar for anyone who played DN3D; They make you stronger and faster, and when you punch enemies, they explode into meat or go flying. That’s always amusing.

Dukevision is a replacement for night vision goggles. Basically, Duke has the eyesight of Predator. There’s no battery life or time limit, Duke’s just got magic sunglasses or something. It doesn’t make sense that he’s an action hero, so why should he have to adhere to realistic opthamological rules?

Meanwhile, chugging a beer will make you take less damage, but it’ll also give you blurred vision. This is one part I really hope they change before the game is released, because unless Duke Nukem has the alcohol tolerance of a heavily medicated ten-year-old girl, nobody gets that blitzed off one beer.

The “drinking with Roman” sequences in Grand Theft Auto 4 pulled off the beer-goggle effect well; you could still play the game, but it was more difficult. Drunk Nukem just makes me wonder if the game crashed. Thankfully, Duke’s got a quick metabolism, so he sobers up really quickly, but when you’re in the middle of a fight and taking heavy damage, the effect of beer will make you more of an easy target than anything else. 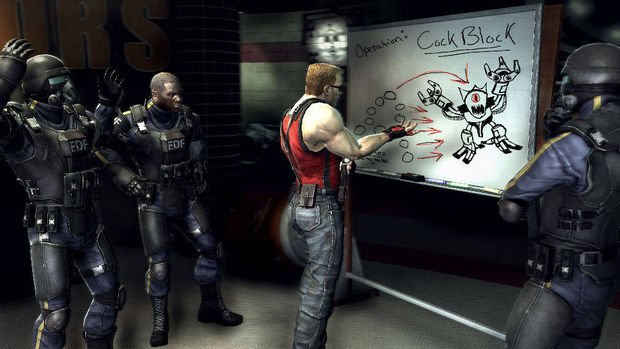 That brings me to the health system. Instead of having a health bar, Duke’s got an ego. If he gets shot, his ego is hurt. If his ego is diminished, he’s dead. If you go hide in a corner, it’ll recharge on its own. Pretty standard setup, right? Well, if Duke performs finishing moves on wounded enemies, or does other manly things — shooting pool, lifting weights, putting a live rat in a microwave — his ego increases.

During one battle, I was getting my ass kicked by pig-cops in a casino. Instead of scrambling around looking for a health pack, I went to one of the slot machines. I got three bars and my ego increased. Of course, in traditional video game fashion, eating food and drinking water also replenishes your ego. Doesn’t really make sense unless Duke is proud of keeping himself hydrated, but hey, this is a game where a roided-out asshole with a buzzcut saves the world from perverted aliens. Don’t think too hard about it. 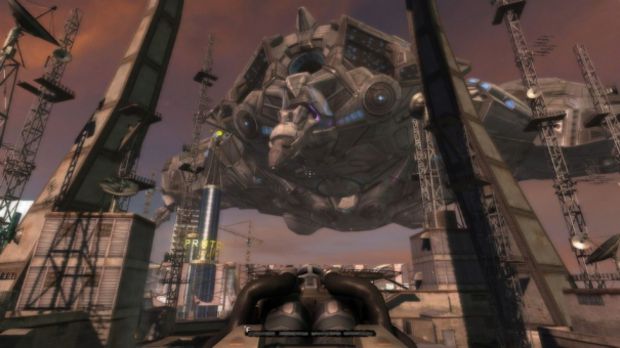 Overall, the gameplay is pretty standard for a shooter. This isn’t a game aiming for military realism or an innovative new gameplay mechanic. It’s a fun game where you blow up aliens and spout one-liners. That’s selling it a little short, though. You can also mess with a lot of stuff in your surroundings, and there are plenty of easter eggs and mini-games. 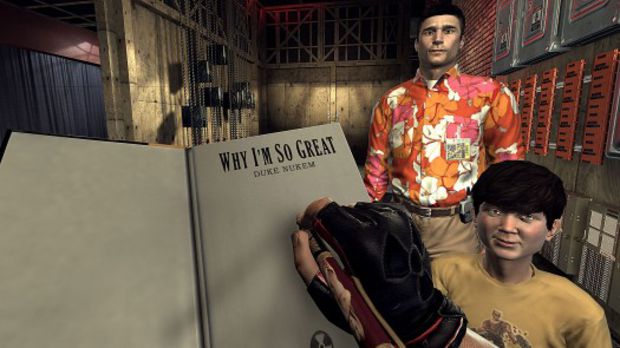 I should probably mention that shooting aliens isn’t the only style of gameplay. At one point, you get shrunken down to the size of an action figure, and you hop in a remote controlled car to race around the floor of a casino. When you ram the car into the shins of aliens, they’ll hop up and down in pain, and try to shoot you. It’s adorable.

You’re able to get out of the car at will and explore on foot. This leads to fighting proportionately gigantic sewer rats. At one point while shrunken, you’re given the challenge of climbing up on top of shelves and pool tables to get to the door controls. Controlling Duke here is reminiscent of playing with an action figure around the house, making him climb table legs and jump on couch cushions.

I’d like to point out that Duke Nukem 3D was a revolutionary first person shooter because it was the first time you played as an actual character, instead of just a generic solider. Creating characters in video games is tricky, because people want someone with whom they can identify. Remember the backlash about Raiden in Metal Gear Solid 2?

Duke Nukem is not a deep character, but he’s got a lot of personality. His personality might not be to everyone’s taste, but that’s irrelevant. He’s not just a generic grunt. On top of that, the decision not to reboot him as some hip, new 21st century hero is to be applauded. You know how Mario is always Mario? Duke Nukem is still Duke Nukem, for better or for worse. 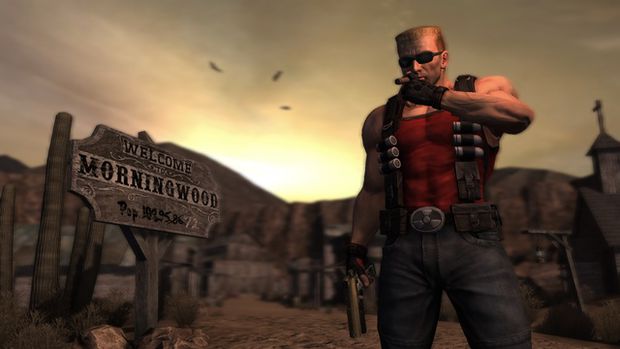 And hey, remember how back in the day, video games were long and difficult, actually leaving you with a sense of accomplishment for finishing them? Well, Duke Nukem Forever is clocking in at around sixteen to eighteen hours, according to 2K. It’s also not an easy game by today’s standards. I died a lot. Admittedly, I’m pretty bad at first person shooters when playing with a controller, but I’ve read similar buzz on other sites. This game doesn’t help you along, you actually have to play it.

The folks at 2K Games weren’t willing to talk about multiplayer at all, but what they specifically didn’t tell me was interesting. At one point, I asked if the jetpack was going to be in the game at all, and their rep told me, “Not in the single player campaign.” Now, why would he specifically state the absence of the jetpack from one mode of play, and not another? If the jetpack isn’t in the game at all, a simple “no” would have answered my question succinctly.

After that, I spoke with Melissa Miller, the game’s senior producer. I asked her if the aliens would be playable characters in multiplayer, and she sort of grimaced while saying something to the effect of “We’re reeeeaally not supposed to talk about that yet…” in a rather apprehensive voice.

Again, neither of these comments are official confirmations of anything, but they leave room for speculation. Personally, I wouldn’t be too surprised if we finally got to play as one of those annoying flying aliens. 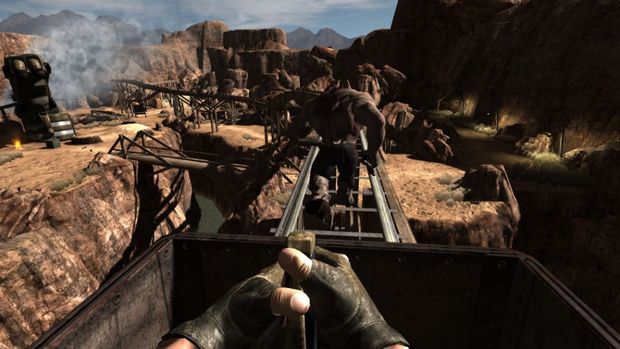 To bring this intensely long-winded preview to an end, I’d like to note that this game has a lot of hype riding on it. It’s jerked everyone around, myself included. A lot of fans at this point either have ridiculously high expectations, or they lost interest a long time ago. The best advice I can give is to approach this game with an open mind. Treat it like something that’s been in the works for three years instead of twelve.

It’s hard for me to be a jaded and blasé game journalist. First off, I’m new with Destructoid. Second, I actually like getting excited about things. Duke Nukem Forever is not a perfect game, and it’s not by any means revolutionary, but I think it’s going to be a lot of fun.

If you want a cutting-edge game that makes headway for video games as an art form, Duke Nukem Forever probably won’t do much for you. If you want a fun game full of titties, beer, and quotes from 90’s action movies… Well, based on what I’ve seen, I think you’re in for a treat.