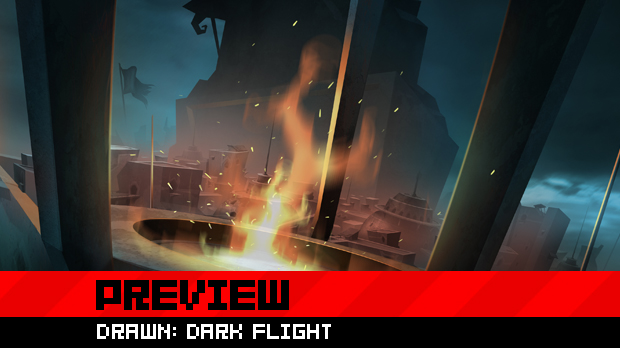 Big Fish Games isn’t exactly a household name. After all, each of their titles are casual games that don’t receive much attention, but seem to do just fine for the company. And considering, as they claim, that they launch a new title every day, there is something impressive going on at this little company. They aim to be — to quote designer Chris Campbell — “a leader in casual games.”

Which brings us to Drawn: Dark Flight. Here is an adventure game sequel to a title that most don’t know about, a point-and-click adventure game for the PC. The original Drawn was a pretty little casual title, and the team behind this sequel, made up of developers from Nintendo’s Treehouse among other development houses, hope to make this one of the best casual titles around.

There’s actually quite a bit to like about this game. See why that is below.

Drawn: Dark Flight picks right up after the plot of the first title. You have just descended a tower in a kingdom taken over by a dark force, and the game picks up in this city. The darkness has become more pronounced here in the streets, and your job will be to solve puzzles to reach your young queen Iris, with the ultimate goal to take back the kingdom and save the day.

However, like most adventure games, these items have to be placed in rather unique and odd places, so the puzzles promise to be pretty complex. That said, this is a casual title, so there’s plenty of help and assistance with completing the game. Big Fish Games really wants to make a game people can complete.

Now, polish is really where devs have striven to place their effort on Dark Flight. The child queen, Iris, has a special ability that allows her drawings and creations to come to life, so throughout the adventure puzzles will involve interacting with pieces of art inside and outside the actual pieces themselves.

For example, one lush painting of a self-aware Easter Island monolith is depressed, for stormy weather in his painting means he cannot receive a letter from his beloved. Using some cranks outside the painting activate a fan that will blow the clouds away.

Once back in the painting, we receive the letter with another image of a pirate. This animated painting, designed to look like cardboard cut-outs, was a puzzle involving shooting sharks with cannon balls before reaching his treasure. It’s a neat effect, with puzzles within puzzles, and these puzzles take place all across the game. Other puzzles entail finishing drawings of objects, like a line of rope, to make them become real and useful in your journey.

It’s the visuals that are most impressive. While the main city streets are creepily pretty, with a hand drawn and painted aesthetic, it’s when you get paintings and drawings that dynamism becomes a big deal. Considering all of their options for artistic opportunities, we’ve got paintings, drawings, pop-up books, cut-outs, sketches, and plenty more art styles to work through. Having such a varied aesthetic fits the style of the game and allows for lots of flexibility for the designers.

Dark Flight looks like a pretty little casual title. There is an extremely high level of polish here, and fans of point-and-click adventures will certainly want to pay attention to Drawn: Dark Flight. Coming in a $9.99 special edition and a $19.99 collector’s edition (with 2 hours of extra gameplay), there are a couple different buying options for players.

Drawn: Dark Flight will be available on August 31.