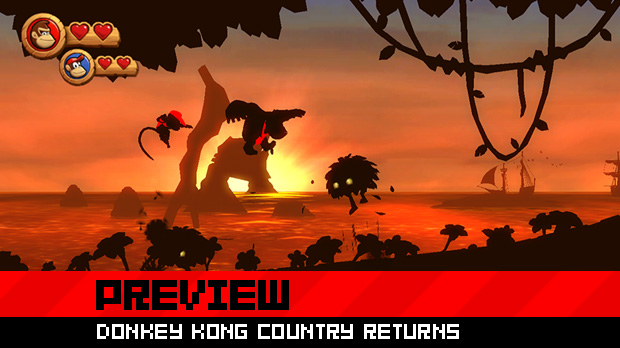 Returning to Donkey Kong Country is like returning to an old friend. Many of us have fond memories of rolling through the jungles of DK’s island in, at the time, one of the most visually impressive games ever made. There weren’t many people who were not impressed by it, and while there has been some criticism of the original games’ platforming, the titles were a pure blast to play. From the music to the general aesthetic, Rare and Nintendo created a series of games that just rocked.

Now that Nintendo is making a return to DK’s island with Donkey Kong Country Returns, a whole new wave of nostalgia is rushing over gamers for a franchise long forgotten as something we’d ever see an update to. Yet here we are, with a brand new Donkey Kong Country game launching in just under two months, and also developed by another second-party development studio with a big R in their name: Retro Studios.

Exciting times indeed for those who can still rap the DK Rap, we’ve spent some time with the game during a recent trip to Nintendo, and we can certainly say, this is one of the most exciting platformers coming to the Wii this year.

Continue reading for my hands-on impressions. 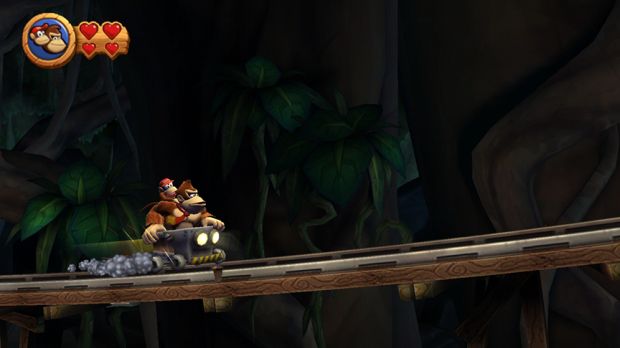 Donkey Kong Country Returns looks and feels like a perfect … return … to the franchise. Simple as that. Anyone coming back after 15 years will find that the movement, feel, and complete gameplay is a fantastic update of the original SNES titles. This time, instead of the traditional K. Rool, DK’s island has been invaded by a bunch of banana-stealing Tikis. That narrative masterpiece is the basis for our game, and considering it’s Donkey Kong, it’ll do just fine.

Once again, DK and Diddy platform as a pair across traditional left-to-right stages, but thankfully between the two of them, there are some brand new abilities to shake up the normalcy. Diddy exemplifies his monkey skills, this time clinging on DK’s back instead of just following behind. Each of them have two heart points, and when they are together, DK and Diddy share four points in total. What’s more, Diddy also has his jetpack most people know from Super Smash Bros. Brawl, so he and DK can double jump — provided Diddy hasn’t taken enough damage and peaced out.

Thankfully, it’s not game breaking to lose Diddy, and DK is still good by himself. Taking a move from the Wii version of Donkey Kong Jungle Beat, DK can perform a ground pound by shaking the Wii Remote. Holding down and shaking, DK and Diddy will blow from their mouths — which, while a weird new technique — is good for taking down the fire enemies and solving simple puzzles. 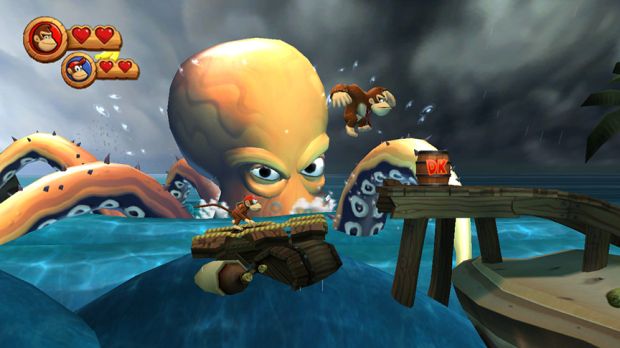 Things become more dynamic once multiplayer starts up. Unlike the original games, where each player would have to alternate between controlling the duo, Donkey Kong Country Returns offers full live co-op. Once Diddy is running on his own, it’s clear he has a few more tricks up his sleeve. In addition to his faster walking speed, jetpack, cartwheel and generally higher jump, Diddy can also shoot from his peanut popgun. It’s a great little addition, and it makes multiplayer that much more fun.

The two characters are different enough that they compliment each other, and the reduced health means the game is still balanced. Even better, switching to single-player is as easy as a button press, meaning those difficult sections can be performed by a more-capable player should it come to that.

Perhaps the most exciting elements to return to Donkey Kong Country Returns is the addition of his animal friends. As anyone will remember, Rambi the Rhino, Espresso the Ostrich, and Engarde the Swordfish, among others, made up some of the most-enjoyable segments of the Donkey Kong Country franchise. I’m very pleased to say that these moments will be making a solid return, although the only one confirmed so far is Rambi.

His segments are great. While only one player can control the rhino, Diddy can still shoot his popgun ahead of him while Rambi plows forward. If you watched the trailer that went up yesterday, you’ll see that Rambi’s stages usually entail racing forward while ruins crumble beneath the trio. It’s fun, and while it’s nothing new, it’s done so perfectly that it’s hard to not be charmed by the big guy. 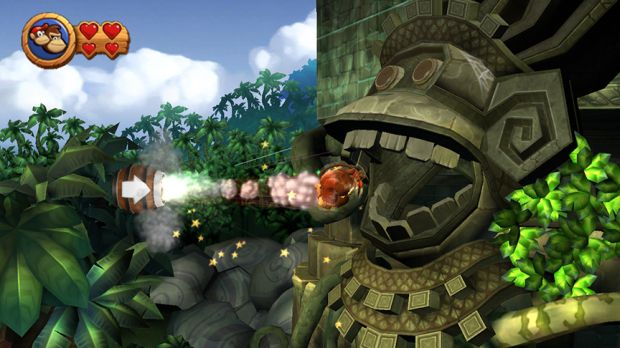 As everyone knows, the most graphically successful Wii titles are the games that cause style, charm, and all the little touches necessary to come together and make a cohesive and visually pleasing game. Retro Studios has done an amazing job of making the world of Donkey Kong Country Returns full of activity and dynamism. Each of the levels have small visual cues that make the world of Donkey Kong vibrant and exuberant.

From the way Donkey Kong’s grass hut warps cartoonishly when he fights the invading Tikis, to the active volcano in the background of the stage, or how a giant octopus’ tentacles will wrap throughout a screen with the charm of a cartoon character, each level is always moving and always buzzing with activity.

This focus on making a fully realized Donkey Kong world is best realized on the Sunset Shore, one of many levels in which Donkey Kong and Diddy must journey through the sunsets and vistas of the their island. During these levels, DK, Diddy, and everything from left to right are stylized shadows with bright red ties and baseball caps. Sure, it’s something “aped” from EXIT and Shank, but it’s done so well that it’s hard to hold it against the game.

This level alone means Kirby’s Epic Yarn has some competition for this year’s best-looking game on the Wii. Donkey Kong Country Returns is one of the cleanest, sharpest and fantastically stylized games on the platform. Once again, it looks like Nintendo has the right approach to making a game that works within the confines of the Wii and produces something fresh, nostalgic, and gorgeous to look at. 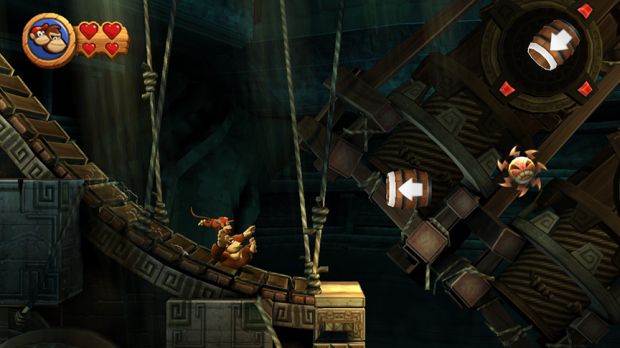 Of course, not just the levels were visually dynamic. Each stage feels truly special and unique, while still fitting in perfectly with the whole title. One level comes across as a traditional jungle platforming stage, and then the next is a wet, ruined temple. Stormy seas, ruins of gigantic Mayan monkeys, a huge angry octopus, minecart levels, stages based upon DK’s animal buddies, and barrel-based stages all showcase the variety.

What is also new is how our simian crew can jump between different planes of the jungle during specific moments in a level. So, at one moment, they’ll be close to the screen, and the next they will be way in the distance. Again, this is something Super Paper Mario did, and it’s an enjoyable little touch that makes puzzles a bit more perplexing. All in all, the stages are fun and difficult, offering new tricks on Donkey Kong Country platforming, and with all the bananas, puzzle pieces, KONG coins, and banana coins you can collect.

Retro Studios has done something entirely remarkable here. Donkey Kong Country Returns is such a solid and true sequel to the franchise. It’s great to see a studio pick up what Rare started and make a game that promises to be a perfect continuation of the franchise.