Diablo is such a weird series: and I vibed with that feeling since the very first game. I had zero idea of what to expect, and didn’t understand the strange history of the Hellfire “expansion” until many years after its release. By the time Diablo 2 rolled around my little crew of Diablo-playing-friends was around 20 strong, and it was a bonafide hit that people still play today.

But Diablo 3 changed things considerably. Blizzard was already changing in terms of its perception as a bulletproof company, and the Auction House debacle was a sign of trouble to come for the publisher. In the end, D3 sold very well, but the team had a lot to prove when they first announced Diablo 4 to the world. So far, based on some hands-on time with the game, I think they’re doing just that. 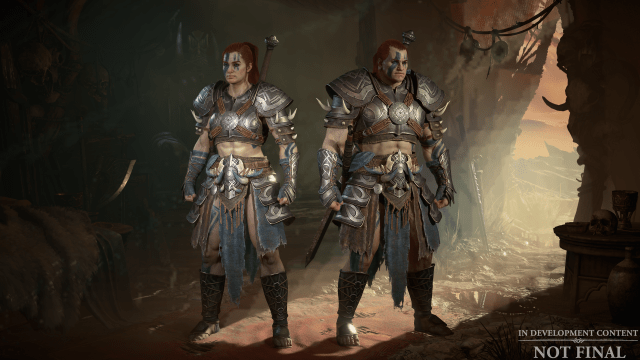 You can choose between more or less guidance: depending on your experience with the series

My build went up to level 25 with three classes (Barbarian, Sorcerer, Rogue), and contained still-in-development content from Act 1. As an FYI, my PS5 copy was watermarked: and I couldn’t use my own screens or footage. And with that out of the way, onto impressions!

Smartly, Diablo 4 is aiming to pick up players of all playstyles: lapsed fans, hardcore folks, and newcomers. Immediately I was given the option of toggling on/off most tutorials, depending on your experience with the series. If you want, you can dive into the game’s new skill tree system immediately, which I did with my “main,” the Barbarian (something I never really do in a core Diablo as a first character).

Here are the three options, with all the specializations you can choose from:

Most of my time was spent with the Barbarian, which I had a lot of fun with. You can whirlwind and leap still, and augment each individual skill/ability with a little spice (like extra damage or more utility). On PS5 by default most of your abilities are linked to the face buttons and the triggers: with a dedicated dodge button.

Bringing in Blizzard’s time with Diablo 3 on consoles, this is now a full-on mechanic in every build (PC included), and charges will increase over time (governed by a cooldown period). I immediately noticed some enemies are designed around this skill, which made a lot of the typically rote fights a little more interesting and engaging.

Respeccing (changing your build) is in. Initially it’s free and can be done anywhere; with a gold price associated with it. I also got the chance to speak to Joseph Piepiora (Associate Game Director), Adam “AZ” Jackson (Lead Class Designer), and Ash Sweetring (Dungeon Producer) about class spread, and learned how the team went about approaching Diablo 4‘s class philosophy:

Destructoid: “I feel like you’ve done a pretty good job of condensing down the D4 classes to a good spread of representation from D1 and D3 – Was there a temptation to add more? How did you decide on the final count and what should be included?”
Joseph Piepiora: “We wanted to make sure as we’re looking to advance the world of Sanctuary…reach back into the series’ past and pluck out these iconic classes to reinterpret. Anyone who’s played recently sees the evolution in the Barbarian…there’s a lot of opportunities for us to take skills and reinterpret them into this new system. In terms of overall count we love the number five (laughs)…but for real, the game has many layers of complexity. Five is a good enough number to hit a good amount of core fantasies, while also giving us enough space on the design side to make things complex…the broader we go the less time we get to spend with each class. There’s an opportunity to grow this roster in the future.”
Adam Jackson: “There’s always a temptation to add more…we love adding more. But like Joe mentioned, a big part of Diablo 4 is mixing the old and the new. You also probably have noticed that these classes have a lot of depth…in order for us to really sell these fantasies and get as deep…and introduce new ways to play, we had to stick to this number to nail the fantasies. As an example the Rogue in Diablo 1 is more fleshed out in Diablo 4.” 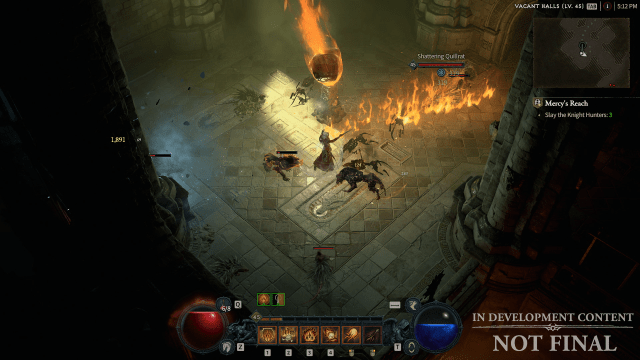 We’re moving into world tiers, as Diablo 4 continues to incorporate more open world game design into the series. “Adventurer” is tier 1 (the lowest/easiest), and “Veteran” is tier 2. You can increase your tier at specific statues (usually in hubs), or on the title screen: and doing so will add more challenging enemies, better drops, and increased XP and gold (the usual stuff).

By default (at this current time in the game’s development cycle), you can swap between the two freely, but the rest are locked. Here’s the full list available to us at the moment:

Each of these tiers from nightmare on requires players to beat a prerequisite dungeon at the previous tier (so in the case of Nightmare, you’d have to play on Veteran). It seems pretty straightforward, and as a Diablo player, I swapped it to Veteran tier right away, and it was manageable. It’ll be fun trying to break into higher tiers at lower levels. 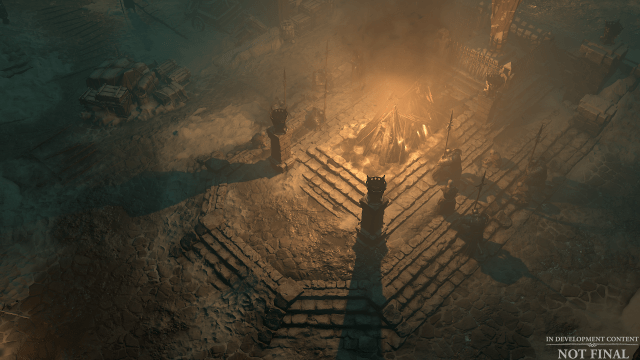 Playing through the first Act, I felt tinges of Diablo 2 in more ways than one. The design is a lot darker, and the story in general feels more dire. The intro showcased a more helpless/beaten down protagonist (they were huddled in a cave, freezing, with a dead mount), which I dug right away. I mean within minutes you’re kicking some wildlife ass, but among that, you’ll come across deserted and broken down cabins and towns. NPCs ask you to prove your worth instead of jumping right into the role of the chosen one straight away, like D3 did. Lilith, the new big bad, also brings an air of freshness to the game, as they’re actually doing hands-on work in the story instead of being relegated to a mysterious force you meet basically at the end.

After seeing this take in action, I dug into it more with Associate Game Director Joseph Piepiora:

Destructoid: “Playing through the current build, I would probably describe the theme, more so than anything else, as ‘dire.’ In D4, my first character started out huddled in a cave and had to get hands-on help from NPCs: definitely a different vibe from D3. Obviously at some point I’ll take down Lilith, and/or maybe a surprise Diablo. Will that dire theming maintain throughout the game, even as you level up? Either way, was striking that balance tough?”
Piepiora: “The story of the Fractured Peaks is the prologue, and the story is starting at a low point. We want that to set the tone in how players engage in the world. In terms of whether we keep that tone…the tone will change a little as you go. I don’t even want to talk about it. But I will say as the player gets more powerful they get slightly more agency in the story, and develop more relationships. At no point does Diablo 4 cease being a gothic horror game. The character is a hero, and they’re using world-shaking power to rise against unstoppable evil. That power fantasy is at the heart of Diablo 4.” 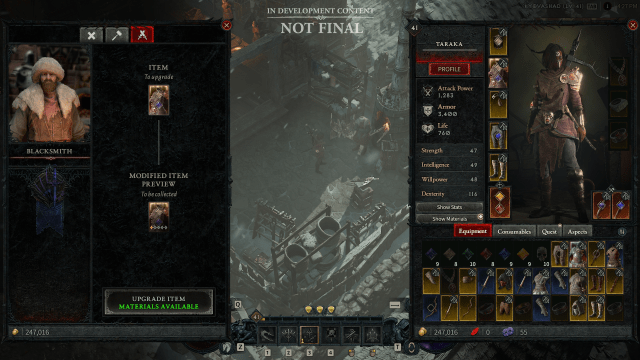 There’s a decent chunk of things to do

When scouring through the Act 1 map, I came across numerous micro-dungeons and random encounters/activities. The classic “elite jumbled up ability” enemy types are still present, but the map feels so much bigger now that there’s more of them. Dungeon Producer Ash Sweetring noted in our interview that it could take players “around 45-50 hours” just to complete the campaign, with a lot more to do after that.

There’s still a lot of “what ifs” with Diablo 4. The team stressed again that premium purchases will be restricted to just cosmetics: but we’ve heard that before. From a pure gameplay standpoint, Diablo 4 also needs to keep things up, and maintain that tension throughout every act. And the endgame (which was hyped again in this media session) needs to deliver. We’ll see what happens, but I’ll be more inclined to be there day one after my time with it.