Let me say this right now: Rock Band is an absolutely massive game experience. Deceptively simple on its surface (Harmonix’s Guitar Hero game mechanics mixed with some drums and a dash of Karaoke Revolution), there are more layers of depth to Harmonix’s new “platform” than Gene Simmons has removed panties. Sure, all of the expected modes are present and accounted for — solo instrument single-player games, multiplayer head-to-head, and even online play.

But, the game’s unique cooperative experience, the “World Tour,” is where the game really finds its identity as a social experience that makes it significantly different than any other game you might think Rock Band is like. During my visit to Harmonix’s studios, I had a chance to spend a nice chunk of time with this exciting new mode … once Harmonix stopped yapping their game (they’re understandably more than a little excited about the game they’ve dedicated their lives to).

Harmonix is going to make rock stars out of you pantywaist nerds. Hit the jump to find out how, and what it was that brought Joystiq and Destructoid together in perfect (yet very metal) harmony. 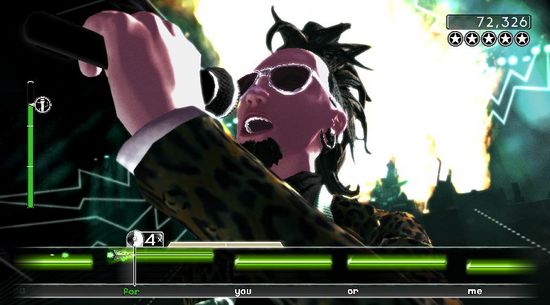 Because Rock Band‘s four-instrument cooperative modes essentially “force” people to work as a group, the experience is immediately different than any music game that has come before it. If Guitar Hero captured a glimmer of what it’s like to be a guitarist, there’s really no way it could have delivered the experience of actually being a working musician.

Being in a band is not simply about playing your instrument — it’s about working with others. It’s about feeding off of one another’s vibe and energy. It’s about choosing what gig you’re going to play next, and how to split up or spend the money (or lack thereof) made from your performance. It’s about arguments, and it’s about the physical performance. It’s also about sleeping with each other’s significant others, and getting into awful fights about things like money and how many times you should repeat a chorus.

Being a group made up of mostly of real-world touring musicians, Harmonix attempts to bring this experience to the masses with “World Tour” mode. Available as a local cooperative mode (sorry, no online), “World Tour” lets you form a band of two to four rockers, and take your show on the virtual road.

The catch to this mode is that you’ll need some friends, or at least people who can tolerate you. Luckily, I was in the company of peers, including Joystiq’s Alexander Sliwinsky and AOL Gamedaily PC editor, Steven Wong, as well as a few others who we swapped in and out of the band (Menudo-style). Our journey into the wild world of rock stardom would begin with a name (which we let the game randomly generate, but you can choose your own): Facial Lock.

Our next decision would be our home town, and we were given a number of choices including Boston, New York, Rome, Stockholm, and more. This would be the starting point for our all-important first gigs, and our decision would be reflected in which venues we could perform at initially. New York was an obvious choice, as I had always wanted to play a gig at the city’s famous CBGB’s rock club, and it seemed the in-game homage, Heeby Jeebies, would be as close as I would get. 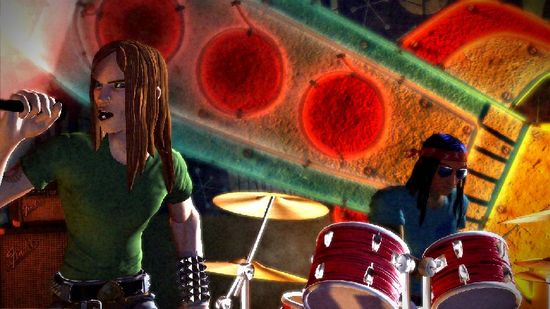 Once the band was chosen, we each had to choose our personal avatar; the game features an extensive player customization mode, but we went ahead and chose characters already loaded onto the Xbox 360 we were playing on. Each character had a distinct look, a testament to the sheer number of customization options available. During a demo of the rock avatar creator we were shown, the variety of clothing and tattoos (which can be applied in layers to create unique and complicated designs) was certainly impressive.

Fully formed and ready to rock, our next few choices were really important — where would we play, and what would we play? That’s right, unlike a the standard tiered “career” found in Guitar Hero, Rock Band‘s world tour actually acts as a career, giving you choices, making it the first open-ended music-game experience to date. Starting at Heebie Jeebies, we had a few options — would we play single songs, play pre-dermined setlists, or choose our own from all of the songs (including DLC) available?

When a “set” is chosen, the songs are played back to back, with no breaks. That means no menus, only pauses for the crowd to cheer, and no noticeable loading. Since we were a new band, our set list was a measly two songs, but one pre-determined setlist (which we saw, but didn’t have the time or balls to play) consisted of seven songs! Assuming each song is roughly five minutes, that’s over an half an hours worth of non-stop ear bleeding, rock n’ roll madness. (The game also features an “Endless Setlist” which consists of playing all of the game’s songs back-to-back, and yes, there’s an achievement for completing that).

Upon completion of our first gig, we were awarded with fans, and money that we could spend on gear and such. We were well on our way to success, until everything came to a halt during our second gig, which we failed miserably, and lost all of our fans … and our dignity. After firing the drummer (we moved him to another instrument, and were able to change the difficulty of the game for each instrument mid-tour, which is helpful for group play), we push forward towards our next show, where our manager informed us that a four-star gig would net us a brand new tour van. 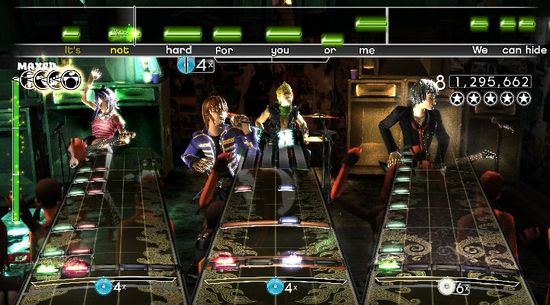 We failed again. No van, and we lost fans. Yelling ensued, as we tried to realign the roles in the band. Things were getting heated, and we were having a blast. Here I was, playing a game — one that in many ways requires a total lack of inhibition — with a few people I had just met, and we were all having the time of our lives. It’s one of those beautiful and magical moments that you normally only get from playing a killer show with a real, live band … but this is just a videogame, right? What special brand of voodoo is this, Harmonix?

After two hours of straight gameplay, it was obvious we hadn’t even scratched the surface of what the “World Tour” mode had to offer. Hell, we never even left New York City (although I think that had more to do with us being a horrible band than anything else). We were told that while the mode does have a “credits sequence,” there’s no real end to the experience, and it can be played until your fingers bleed or someone in the band overdoses on cough syrup.

Based on my time with the “World Tour” mode so far, I have a few suggestions to make regarding preparations for next week’s launch: Make some friends (you can’t play through the tour alone), take a few days off from work, and stock up on adult beverages.

Tours are daunting. Be prepared.