Adding multiplayer to a game that is primarily known for the single-player experience is always a finicky deal. Take a look at Metroid Prime 2: Echoes, or BioShock 2. While both of these titles were able to bring solid gameplay opportunities, the multiplayer just never quite meshed with the rest of the franchise. Fun, sure, but not quite up to par.

That is a very serious possibility with Dead Space 2‘s brand new multiplayer mode. Sequel to 2008’s surprise horror hit, the game succeeded in creating a strong sense of dread and fear in the deepest parts of space. Any multiplayer mode is going to lose some of these scary elements, but with the right team, this mode could build on the universe and create something fans can return to once the single-player campaign is done. For any success, this mode cannot be half-assed.

Visceral Games has a good attitude about the situation, with an entirely separate team setting up the multiplayer mode. Even better, the game they have created is one part Dead Space, one part Left 4 Dead, and one part Modern Warfare. There’s surprisingly a lot going on, so continue reading below.

Dead Space 2‘s multiplayer boils down to this: it’s a traditional 4v4 versus mode seen in many games. However, there is a decidedly Left 4 Dead feel to the mode, as four players are rocking the human engineers, and the other four crawl about as the twisted Necromorphs. Yep, fans of ganking will have a blast with this one, as nothing is more satisfying than killing some dude as a baby tentacle monster with a couple of your buddies. With regards to the basic gameplay, this is about it, with one team trying to escape, and the Necromorphs just trying to eff things up.

There is a slight RPG system at play, however, as players will be earning experience to receive different customization options for the game. These can be weapons for the humans and attack variations for the Necromorphs, as well as aesthetic changes. Experience can be spent at the Shop area, and hopefully the unlockable options promote multiple playthroughs.

Dead Space 2‘s multiplayer is admittedly a little light on variations. As a matter of fact, there are only five arenas to work through, and there is only one mode to play through. If it initially seems anemic, it’s not. The goal is to make these five arenas feel more robust, with each one offering slightly different gameplay offerings. I was shown two levels, Titan Mines and and Escape. Titan Mines required players to try and move bomb parts to different areas of a mine, while Escape required the human players to charge forward through a spaceship to escape pods.

There’s enough distinct differences between these two levels, and with three more offered, hopefully we can see some strong variables in levels alone. One nice touch is that — keeping with Dead Space‘s zero HUD rule — the scores and timer is posted on physical leaderboards placed around the map. It’s a neat little touch. 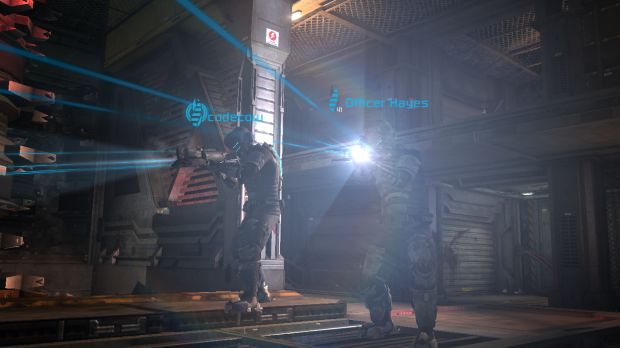 Playing as the humans, controls are just as you’d expect. Players have options for two weapons at a time, and, like I mentioned before, they can earn more options and loadouts to be used in multiplayer. Playing as humans is instantly recognizable and easy to jump into, and while having three friends with you means the game is not quite as isolating as the single-player game, this is certainly a creepy multiplayer component; you’re always on the search for Necromorphs jumping out and attacking. It’s very intense.

However, we know what’s what, and most people are interested in playing as the Necromorphs. Much like the Special Infected from Left 4 Dead, the Necromorphs have special abilities distinct from the human players. There are four in total, but we were only shown three of these horrific beasts. First of all was the Pack, a small child Necromorph that is fast and dangerous. Designed to rush behind the human players and hack away, these weaker Necromorphs were great at overwhelming the human force.

Another option is the Lurker, which very much looks like a baby crawling around on the walls and ceilings. A good Lurker will sit on the ceiling or a pillar and shoot acid at the humans. They too can run up and attack, but they are much more of a distance-focused class.

Finally, I played as the Spitter, a giant female Necromorph with tentacles to boot. She has a chargeable acid wad she can spit, and considering her strength and power, there is an extended respawn time for her to be used. The Puker will be the last one, and he’s a short range, heavy damage Necromorph, although we were not shown him in action.

Each of these characters control and feel very different, and it looks like from my play time, players will fall into roles they really enjoy. I found the Lurker to be a fantastic support class, making sure that the humans never knew where exactly they were taking damage from, for example. 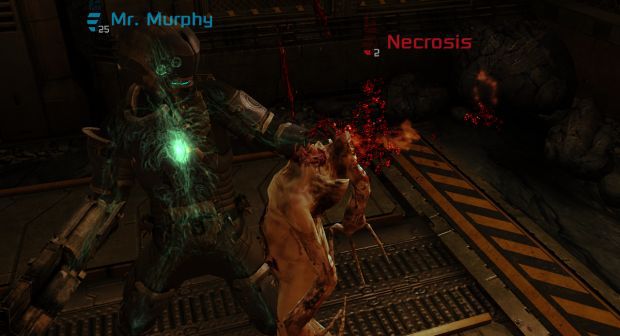 Actually playing as the Necromorphs is a much faster experience than say, a game like Left 4 Dead. Instead of respawning after a long 30-second cool down, the Necromorphs can respawn instantly (Spitter excluded), but they have have to choose where they will respawn. Throughout the levels are ducts that can be smashed open, so a thoughtful player will try to find a good spot to make the most damage.

Spitters and Lurkers will want to spawn from across the map, and Pack necromorphs will be better suited popping out right by the humans. Helping the Necromorphs is this visual representation of the human’s nervous systems, and while it’s a rip off of what Left 4 Dead did years ago, it’s much more visually impressive this time around. Overall, it’s a frantic experience, to say the least.

What is most exciting about the Dead Space 2 multiplayer is how clearly Visceral Games is working hard to make this a multiplayer game worth playing, not just some slapped on versus mode with some half-assed excuse for something unique and distinct.

There is a lot of thought and involvement in making this a balanced and enjoyable experience, and while not everything is known or explained about the game, my time with it so far left me itching for more.