Suffice it to say, there’s been no shortage of hype surrounding Dead Island recently. After sending chills down every red-blooded gamer’s spine with their haunting debut trailer, Deep Silver has given themselves a tremendous amount to live up to with this title. Add that to the already massive number of zombie survival shooters out there, and what you get are tough odds for standing out against the crowd.

The question that’s undoubtedly on everyone’s minds is whether or not Dead Island delivers. While I can’t say for sure at this point in time, I will say that it brings to the table a mix of gameplay concepts, some original and some borrowed, with a beautiful environment and a dark, twisted sense of realism to create what has the potential to be a good, if not great, game.

Set at the once luxurious Palms Resort on the fictional island of Banoi in Papua New Guinea, Dead Island focuses on the lives of four very different characters who suddenly find themselves in a very similar (and sticky) situation. I played my demo as Xian Mei, a stereotypically Asian staff member of the resort with a penchant for knives.

The game’s opening cutscene shows you drunkenly stumbling through the crowd at a hip-hop performance by rapper Sam B, who bears an odd resemblance to Flava Flav and later reappears as one of the four playable characters. You notice out of the corner of your eye strange activities are afoot. You stumble into the bathroom to find a woman lying dead on the floor, moments before passing out. 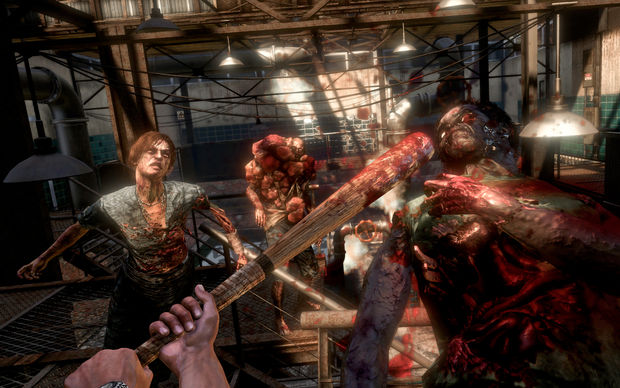 You awaken the next morning to a zombie-infested island with no recollection of how the outbreak started. As one of the few remaining humans on the island, it becomes your duty to find other survivors and work together to call for assistance. To protect yourself, you’ll need weapons, which you can find in various areas on the island. You can also purchase them from merchants hoping to cash out before help arrives.

I was given access to two different areas of the game during my demo, the resort area and the city area. Scattered throughout the shacks and buildings around these areas are blueprints and workbenches, both of which you’ll need to combine weapons for increased damage and awesomeness. Much like in Dead Rising 2, you have the option to combine a baseball bat with a box of nails to create a nail-studded bat. Of course, all of the weapons you find will be in varying shape, so repairing and upgrading them is crucial to doing damage on your opponents. It will cost you cash, though.

When you venture out onto the island, there are several things you will immediately notice. The first is that there is a lot of bobbing and wobbling when you walk. It can actually make it difficult to control on the game at times, so I really hope this is something that becomes less apparent the more skilled you become. Speaking to that, you will also notice that you’re awful at handling weapons. Wielding a weapon is tricky at first, but your character learns quickly. If you notice you’re missing swings, you’re most likely exhausted. As you level up, you’ll begin to see your stamina increasing with every zombie you kill. You’ll also gain skill points which can be assigned to one of your three skill trees, each of which contains both active and passive skills.

Practically every aspect of your character’s physical and mental abilities improve as you advance. Even the one-line quips muttered by Xian Mei after making a kill progressed from anxious and disturbed in the beginning (“There’s no end to them!”) to hilariously confident by the end of the demo (featuring such gems as, “I kill you!” and “Dead FOREVER!”) Expect to hear a lot of heavy panting as well, as it’s also a sign of exhaustion. These small, realistic touches are what gives the game an extra polished feel. 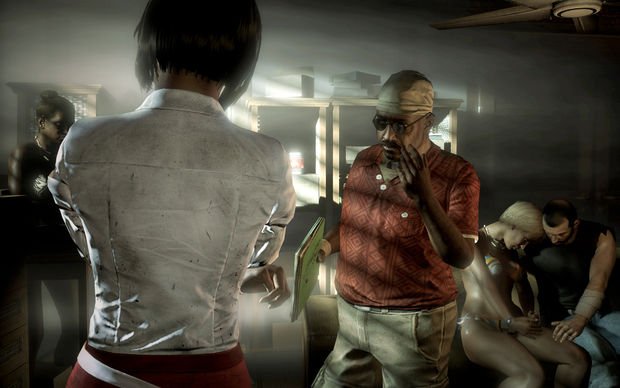 The first quest I did was a favor for a survivor I stumbled upon named Dominic. He and his crew have been trying to call for help, but have no reception. My task? Find an amplifier at a nearby lighthouse to cut through the static. When I arrived at the lighthouse, I discovered another group of survivors. After talking to them, I learned that the two groups had a difference of opinion on how to escape from the island – the first group of survivors wanted to stay and wait for military assistance, while the second group was trying to get off the island as soon as possible.

After speaking to some of the survivors there, I accepted a second quest from a guy named Trevor who asked me to travel to a cave on a nearby beach and look for any signal flares that may have washed ashore in a recent shipwreck. I reached the cave and there stood a group of eight or ten zombies of various classes ready to rip me apart. Two things became immediately evident as I entered my final moments. First, I really, really hate caves. Secondly, the lighting in this game is very well done. It’s apparent that a great deal of effort was put into making the game’s dimly lit areas appear scary and treacherous and, indeed, I am told there are many dark areas you’ll be exploring in the game.

Of course, the gameplay wouldn’t be nearly as exciting if there weren’t several classes of zombies ready to pop out from beneath the shadows and make you damn near sh*t your pants. The majority of zombies are called Vessels – slow moving, probably obese, and probably wearing a Hawaiian shirt. The ones you need to worry about are the Aggressive Zombies that run at you from several meters away. Those are best dealt with by chopping off their legs and then beating them to death. Then there are the Ram Zombies, massive straightjacket-wearing beasts that charge at you from a distance and knock you down. There are even Suicidal Zombies that explode when they get close to you. (Sound familiar?) 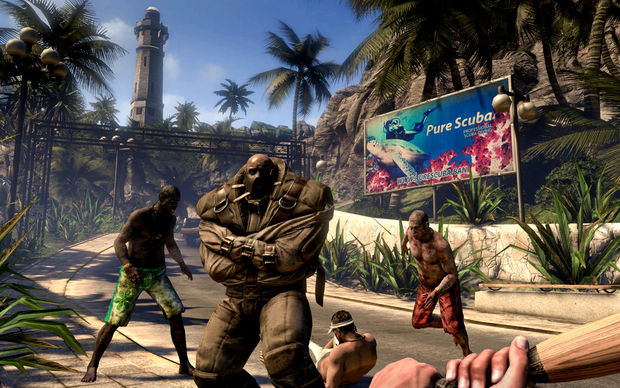 In addition to making the game more challenging, the various classes of zombies elicit a more strategic reaction from the player than what is typically accomplished with simple hacking and slashing. Instead, it becomes a delicate balance of striking, dodging and maneuvering.

Although Dead Island is being marketed as a heavily melee-focused game, there are a number of ways to go about killing zombies, not all of which involve melee combat. Pulling the left trigger automatically places a target on the nearest zombie. If you’re approaching a group of them, pressing B will activate a special one-time-only skill that does extra damage to mobs. You can throw a weapon at a Suicidal Zombie to kill it before it has a chance to explode near you. Or if you’re like me, you can approach a zombie in the water, pull a bitch move and kick it with the left bumper to give it drowning damage. What’s neat is that the game features manual controls that allow you to slice and dice as you please. The default is automatic, which shows your standard two-second cutscene of a zombie’s head falling off or something equally as gory.

So, after shamelessly beating those repulsive cave zombies to death with a wooden boat paddle, I headed over to the city. It’s not until a few hours into the game you arrive at the city, so you can already tell it’s visibly more devastated than the island. Everything has been ravaged and the sunshine and salty sea breeze have been replaced by grey clouds and pouring rain.

I arrived at a church after receiving a tip that there were people trapped inside. Waiting for me in the courtyard outside the church was a Ram Zombie. The tactic for defeating these is a little more complex. You have to let them charge at you, dodge them at the last second, and then attack them from behind while they’re still disoriented. Fun fact: I died four times while trying to take down this guy. I can’t decide if this is a testament to how challenging the game is or to just how much I suck at video games, but for the sake of my dignity, let’s assume the former. It should be noted here that Medkits are found all around the island or can be purchased from a vendor and quickly administered with the touch of a button. 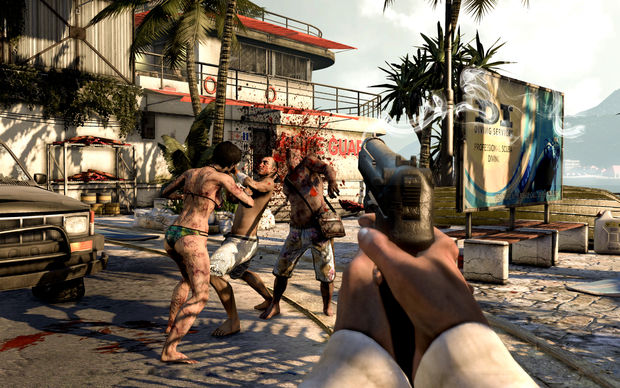 Upon entering the church, I find a nun. She tells me that one of their own has become possessed by a demon and has locked himself in the bell tower. He repeatedly rings the bell, a cry for help which only attracts the zombies more. “Please help me silence these bells,” pleads the nun. “They are calling to the devil’s disciples.” These are typical of the kinds of quests you will complete in Dead Island. Fetching items you’ll need in order to get off the island, rescuing survivors, and staving off zombies will make up the bulk of your time spent playing, and completing missions for others will earn you XP, items and, sometimes, cash.

Although the game is open world, the entire island is infested with zombies so you obviously won’t want to linger in any unsafe area for too long. Zombies also randomly respawn in areas you have already been, so the only way to truly save yourself is by getting off the island. From start to finish, it should reasonably take about 20 hours. With all of the side quests, it’s more like 25-30.

Overall, I think Dead Island shows promise. Though I was slightly underwhelmed by the clunky controls, I think the game visually looks great and the full storyline (which publishers are keeping under wraps for now) is deep enough to keep you coming back for more. I wasn’t able to demo online co-op mode just yet (the game has no local co-op), but I was told the gameplay would be very similar to that of Left 4 Dead, allowing up to four players, each with their own unique abilities.

Destructoid is scheduled to get some hands-on time with the co-op mode at E3 next month, along with an official release date for the game. Stay tuned in the coming weeks for more coverage.