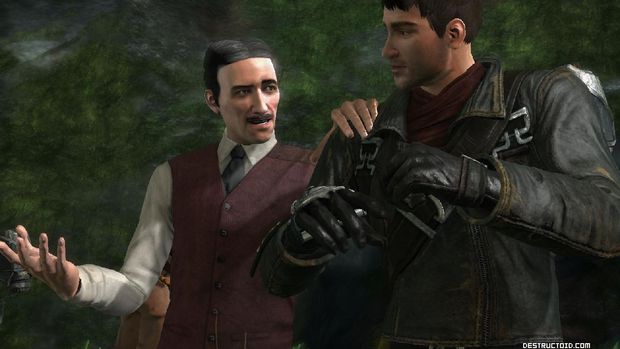 The other day, Capcom had an event to help spread the word about Dark Void. While you may have heard about the contest that was announced, the event didn’t really lend itself to getting a good idea of what a person can expect from Dark Void. Not to say that there wasn’t ample amount of play time, it was just a lot of what was playable had no context. Multiple levels were open for anyone to enjoy, but aside from a glimpse into the combat and the jet pack mechanics, there wasn’t much to give you a firm grasp of what the title is aiming for.

And that’s why companies are smart enough to give you preview code. After getting a good couple of hours play time in on the game, it’s become incredibly apparent that the whole jet pack aspect of Dark Void barely scratches the surface of what the title delivers. If you were thinking that this title is going to be some sort of Rocketeer clone, or a jet pack Grand Theft Auto, then allow me to enlighten you as to why you’re incorrect after the jump.

True to form, though, the game does start you right off in a jet pack level. You play as an unknown character from 1938 who seems to be test driving a jet pack for Nikola Tesla. You fly around a bit while the game teaches you a few controls, then you and your envoy are suddenly attacked by what appears to be alien-like ships. A battle ensues, but the end result is that the test pilot is killed by one of the alien-like monsters. From what it appears, the level is designed to basically reinforce the idea that there are bad guys, and a jet pack. Because as soon as the brief intro level ends, the game itself actually begins, and it’s a fair amount of time until you get the jet pack again.

This is actually a good thing, considering the narrative that begins is quite well done. The first cinematic of the movie introduces you to the pilot Will (the character you play as), who finds himself and his co-pilot loading up a plane and waiting for the cargo’s courier to arrive. None too surprising, it happens to be Will’s ex (or at least implied so), and the three of you fly off into the night.

As the plane is flying along its merry way through the Bermuda Triangle, the controls go a little haywire. Again, none too surprising, things go horribly awry and the plane crashes. Will’s poor co-pilot doesn’t make it, but Will and Ava (the ex) do, and find themselves in a strange lush jungle. Confused as to what happened and where they are, the two of them set off on foot to get some answers.

Lo and behold, they eventually run across a soldier who tells them to take cover as he scouts around, and then meets with an untimely demise at the hands of a steampunk, robotic-like alien thing. Will and Ava strip the poor bastard of his weapons, and head out. The both of them eventually traverse the jungle area and find a village where the locals are none too happy to see them… except for one. This one friendly villager takes them to see none other than Nikola Tesla, and he gives Wlil a boost backpack that helps him in his mission to find the parts to fix the plane.

There are two thing to point out so far. One, it’s clear that this storyline is pretty formulaic along the sci-fi tenets of storytelling. And, two, still no damn jet pack. Keep in mind, though, that those points shouldn’t be taken as negatives. In fact, it’s these two points that have given me an incredibly positive perspective to a game that was nowhere near close to my radar before.

While the whole “getting thrown into a crazy situation with your attractive-yet-aloof ex while inexplicable science fiction themes pop up all around you” is nothing new for a sci-fi story (especially in video games), it is certainly a new thing when it’s done well. Several hours into the game the narrative still holds up and is entertaining, while remaining compelling enough to keep the player interested.

One of the reasons for this, I think, is that the creators seem to know exactly who their target audience is. There are so many references that sci-fi fans will immediately get (ranging from Star Wars to Back to the Future) that are packed into the game, that it feels like you’re watching a Sci-Fi channel (or SyFy, which is dumb) movie. Better yet, the Dark Void story, so far, feels like a movie that Sci-Fi wished it had made.

But where’s the damn jet pack, right? Don’t worry, you get your jet pack soon enough. But not soon enough for Dark Void to show you that the jet pack isn’t some lame gimmick that gets abused throughout the title. Before Will even graduates to the jet pack, he has to fight and climb his way through the jungle.

On ground combat is the of the shoot-and-cover variety. Anyone who has ever heard of Gears of War will know what that means. And even though Dark Void is not a crazy intense shooter like GoW, the controls are tight and the enemy AI is very well done. Add that to the good level design, and it makes it fun to play the shooter parts. Fair warning, don’t expect this to be on insane frag-fest game.

The remaining gameplay aspect of the title is the vertical platforming. While not terribly different than actual platforming, the perspective change makes it feel pretty fresh. Not to sound like I’m pouring heaps of praise on Dark Void, but for a person who likes platformers I can say that the developers have also come through in the level design. In one area in particular, Will has to to collect an item that’s hanging off of a ship. A ship that’s hanging vertically down the side of the cliff. After the gaining the item, he then has to climb his way back up the ship as it’s falling apart — because he’s being attacked by mad amounts of enemies. Still without a true jet pack!

There are a few negatives, though. Occasionally when your platforming in the downward direction, you reach the next platform and it wont “catch.” You’ll suddenly find yourself standing upright while all the enemies are below you shooting you to death, and sometimes in fast combat you can be royally screwed or confused by the cover detection. Here and there there’s also a little frame stuttering, but I’m pretty sure that can be addressed. Honestly, none of these issues takes away from the game, I just felt that they should be mentioned.

That’s pretty much it. Unless Dark Void completely jumps the shark with some sort of retarded plot twist or ridiculously out of place gameplay mode later in the game, I think that they have pretty solid win on their hands.  What surprised me most about the title and has me looking forward to it, is the way that Capcom has seemed to successfully combine the fun parts of three gaming genres together, and wrapped it with an awesome sci-fi shell.

Oh, if your wondering what the the third genre is, it’s flying. I mentioned there was a jet pack, right? There is, and it’s awesome. Jet packs are always awesome.