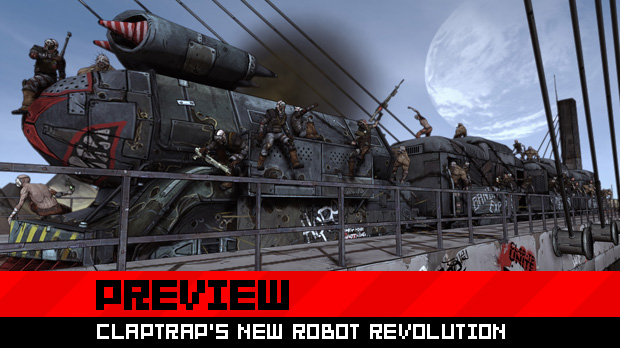 It’s been about a year since the first time I saw Borderlands. Taking place at some quirky bar in the famous Haight district in San Francisco, the oddness of the place fit the game, and I wasn’t expecting much. At that point I had not paid much attention to the title, and speculation about the game was that it was going to fail in the midst of a saturated holiday market, so no one seemed initially exuberant about the game. Walking away from that event, my opinion changed, and I was impressed with the unique and visually impressive game Gearbox made.

The critics and consumers agreed, as Borderlands did very well, so much so that Gearbox introduced three fully featured downloadable content packs. Against all expectations, it’s lined up a fourth one: Claptrap’s New Robot Revolution.

Keeping par with the nature of the previous content packs, this one takes the silliness to the next level, focusing on the one and only Claptrap, the beloved (and maligned) robot box assistant. Now it’s a story all about him, and if you want to kill him, now’s your opportunity.

For those of you who don’t know, the deal is that with the opening of the Vault, Hyperion Corporation has seen a massive drop in sales for its weapons. Apparently people just picking up weapons isn’t great for sales. So they’ve sent the special Claptrap Ninja Assassin to deal with the problem. Unfortunately for them, this little guy found his race of Claptraps to be oppressed, and he’s started an uprising against the dominating forces… which unfortunately, includes you. C’est la vie, I suppose. Viva la revolucion?

This Robot Revolution is also a boss battle mode, of sorts. Previous bosses from the game have come back from the dead, only this time they aren’t so… humanioid. (Their transformation is literally called “Getting the clap.”) Now that the Claptraps have gotten a hold of them, characters like General Knoxx have come back from the dead, half man and half Claptrap. This applies to the enemies as well, as humans, skags, and rakks are now all bionic, with tubes and wires sticking all over the place. This includes the new Tartarus Station, a train station area that is more open and less linear than the General Knoxx zone; the whole town has a “Claptrap-ified” new look.

Other new additions to the game include three more backpack item slots to carry more of the new guns and items to rock out on the go. With the new level cap brought over from the latest (and free) patch, and the 20 new missions, these new add-ons are going to go a long way to making a new experience.

It looks like the writing, however, is where the game will really shine. I was told that every member of the team has left their fingerprints on the humor of the title, and it shows. Killing a punching-glove equipped Claptrap, for example, and he’ll die while screaming “404 error: server not found.” Lines like these are littered throughout the game, and it’s often a specific brand of humor for those who spend a little bit too much time online. It’s great. Throughout the new area of Tartarus Station, the impact of the Claptraps are everywhere, with fake revolution posters designed to look like Che Guevera, among others, and the whole vibe is this silly little revolution gone weird. By far it is the funniest and goofiest interpretation of the Borderlands universe.

When asked if this would be the final content pack for the game, the response I received from the Gearbox rep Adam Fletcher was that Genral Knoxx was initially going to be the final expansion. So as long as fans keep playing and buying the new additions, there is a good chance Gearbox could make more after the Robot Revolution.

Also, it’s important for me to note that Gearbox and its employees seemed really intent to make a game that really stands up as something the fans want to play. This was indicated when I first previewed the game last year, and it certainly seems to be the case with this bit of content. The patch we reported on earlier today indicates the same thing, as that was entirely designed to please the fans.

Finally, for people interested in Borderlands, but have not picked up the game, the Game of the Year edition will be coming out on October 12 for $49.99 for PC, $59.99 for consoles, with all of the downloadable content, as well as a specialized map of what Gearbox is calling “The East Coast of Pandora.” Pretty interesting, considering that means there’s a whole West Coast that has not been seen. Allusions to the future, it’s pretty clear that Gearbox is already preparing for the next game in the franchise. When I brought up questions about problems with the franchise, such as the lack of scaling between players at different levels, the developers just nodded their heads knowingly. Hopefully good things will be in store for the future.

Coming away from Claptrap’s New Robot Revolution, I feel great that this might be the best bit of downloadable content yet. Incredibly funny and tongue-in-cheek, it’s total fan service, designed for a laugh, and fun to boot. For those who haven’t played any of the new downloadable content, this might be a great one to start off with. For those who have been keeping up with the add-ons, this is one not to miss. Be ready to pick this one up September 28 for Xbox Live and PlayStation Network.