Our Jonathan Holmes got to participate in what might seem like the more exciting side of a of a Child of Eden press event, which was scheduled to coincide with last month’s Tokyo Game Show. We split the duties, which gave him the hands-on (hands-off?) experience with the game’s Microsoft Kinect motion-controlled mode while I took the standard control pad mode. In the end it turned out that I probably had the better experience. Holmes said that he wished he would have tried the control mode after hearing what I had to say about it.

Unfortunately for Kinect hopefuls, as it stands now, the controller-only experience is the definitive one.

To be fair, Tetsuya Mizuguchi, producer of Child of Eden, said that the Kinect control was still a work in progress. He noted at the event that the heads-up display for the game hasn’t even been created yet. And to be fair to Jonathan, he said he wanted to do the Kinect play hands-on. I felt I was getting the better and safer end of the deal.

I watched a few of my peers play the game in both formats, and I still had no idea what to expect, even after talking to some of them. It was clear that the game is absolutely beautiful, just as many of Mizuguchi’s titles are, but I found out that so much of the beauty was yet to be experienced. Or felt, I should say: By playing the game I felt what Mizuguchi had gone on about in his presentation earlier that evening, about how he had been striving to incorporate the unique experience of unifying sound and visuals in a game.

Control is quite simple in Child of Eden with the controller. You use the analog stick to move a cursor, and holding down the X button locks onto targets that your cursor passes over. Releasing the button fires at all the locked targets. Another button releases a bomb of sorts, and it is used to take out all of the potential targets on screen. At its core, this is a simple shooter: You’re out to take out the negative aspects of what you’re seeing, which are usually clusters/orbs/blocks/parts of an opposing color from the overall color scheme. For example, the demo stage opened up with a blue, transparent whale soaring through space, flying in front of your view. The whale was mostly made up of blue, shiny clusters, but some orange ones would randomly appear within his body, and those were the ones to be taken out. Note that the game does not go out of its way to make clear at what you’re to be taking out, but for anyone paying attention to the overall scheme, it should be obvious. 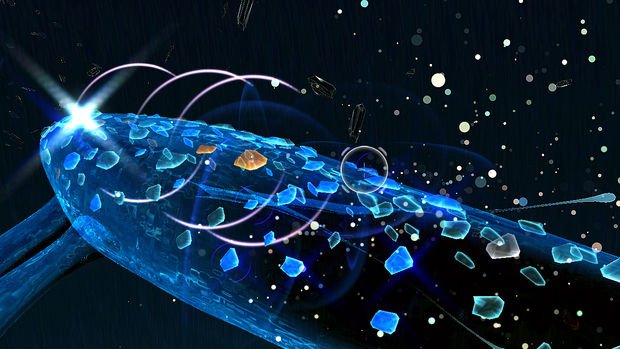 I don’t want to cheapen the game by going on about what you’re actually out to achieve in this game by playing it. There’s very little in the way of a story — something about purifying viruses that harm sweet memories — and if you’re anything like me, you’ll quickly forget whatever story bits you were told when you fall into the game’s trance anyway. It’s more about the experience, though I don’t want to give the people that say this title isn’t a game any credit. It’s certainly a game, and a lovely one at that.

Further into my demo experience, after “purifying” the whale, the whale moved on, and then I encountered a brilliant orange phoenix in the same space. Like, stunningly brilliant. By this point in the game, I was thinking less and less about game mechanics and control, and more about how intuitive the movement felt, and how the colors, sound, and movement all seemed to work together. I was grinning. I felt myself moving into something like a trance, and only when I realized that I had been a peaceful and almost automatic state for some minutes did I fully realize how much care went into the presentation of this game. There were segments so beautiful that I got goosebumps. The feeling of soaring past beautiful imagery and how I felt I was interacting with it stuck with me long after I put the controller down. 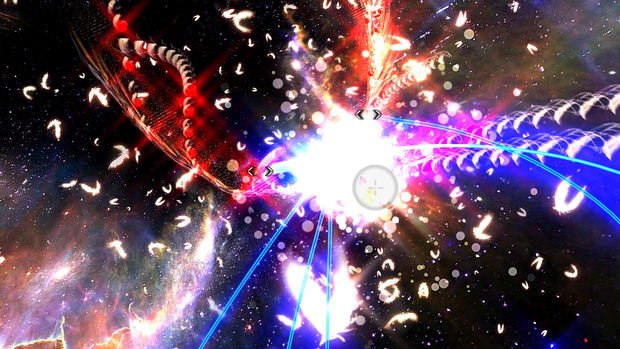 The connection to the simple controls felt so natural that I was pretty discouraged after hearing the impressions of those that played the Kinect control version, but after watching some play, I understood their frustration. My mind was free to become immersed with only minimal movements of my two thumbs required to play the game. In contrast, the Kinect players had to make grand gestures that sometimes didn’t even work to do the same thing. How will someone that is breaking a sweat moving about be able to become immersed in the experience that they game makers intended. I urged several of my peers to try the controller version.

I went into this event expecting for the Kinect controls to be a focus of the presentation. Understand that the first example of game play we saw at the event was Mizuguchi himself playing a level with Kinect controls. (He seemed to be quite good at it compared to the press that played later.) I’m glad I listened to a Q Entertainment employee that insisted that I play the controller version over the Kinect version. Though I only played one level, I could already tell that this game was a labor of love, and that it would hold up nicely as a successor to Rez. This is yet another of Mizuguchi’s creations that works to get past that base level of control and goals, and goes beyond to mess with your emotional state and feelings. I was left in awe, and came away with the desire to sit in a room, shut off the lights, put on some headphones, and not go anywhere until I’ve experienced all that Child of Eden has to offer. To say that I’m excited about this game is a huge understatement.