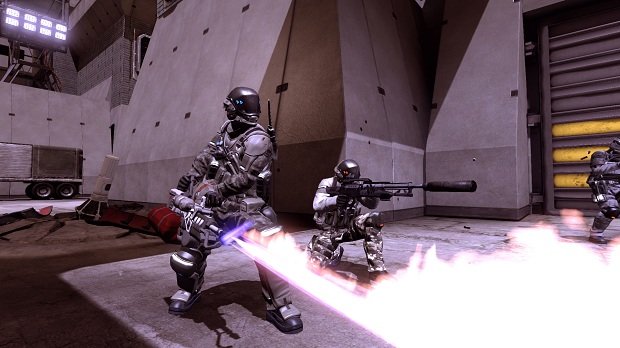 A lot of Dtoiders have probably already heard about Rusty Hearts, a free-to-play, anime-inspired dungeon crawler; this year at PAX, though, Perfect World was showing off its latest project, Blacklight: Retribution, a free-to-play competitive first-person shooter.

Most of the gameplay is pretty standard stuff. Before you spawn, you have the chance to choose one of several loadouts, including assault, sniper and heavy weapons. Each “class” has a few different weapons available to them, with a few more available on the map. As you and your team make progress, you can stop by a depot and quickly call in additional weapons like flamethrowers or heavy mechs.

Blacklight starts to separate itself from most other contemporary shooters by creative implementation of some of these pieces of equipment. For example, in most games, you would need a rocket launcher or similar anti-vehicle weapon to put any real dent in the health of an armored unit. In Blacklight, you can use the HRV (hyper-reality visor) to show weak points, enemy positions through walls, etc. It is entirely possible to track hidden snipers or to punch a mech until it explodes if properly utilized. The visor does take awhile to recharge, so some strategy comes into play when using it. The visor was in the first game, but its applications were limited without the inclusion of vehicles and heavy weapons.

I managed to eek out a few rounds with a guy from GameRevolution and another writer from PlayStation Life. We played against a few other PAX attendees, Fans vs. Writers. We lost the first round, but it was decently close. I took a lot longer getting used to the concept of using the HRV than I am comfortable admitting, but once I got the hang of it, I could use it and quickly report positions to the team so we always knew where the enemy was. We came back and swept the floor with our opponents the second round.

We played in what appeared to be a military factory for the heavy mech suits available for call-down. There were lots of tight areas that confound intelligence gained from the HRV and some nice open areas for big showdowns. At one point, our team chose to use myself and one of the other guys as a distraction so the third could use a flamethrower on an enemy mech and force him to abandon the unit. Once we had control of it, we cruised to an easy win.

Between this and Firefall, the subtle prejudice I have for free-to-play games has definitely been called into question. I tend to think of F2Ps as janky-ass projects with dated graphics and even worse gameplay that spam users with ads, but I was really impressed. Blacklight definitely keeps pace with non-Battlefield 3 AAA titles, and it feels solid. We’ll see if it proves to be more successful than its predecessor.

Blacklight: Retribution is tentatively scheduled for a 2012 release.