What in the hell is Antares Voice Thing, you ask? Those with a modern day musical background should recogize the company name Antares. Late last decade they took the music world by storm with their voice tuning technology, Auto-Tune.  Auto-Tune is the technology that convinced Cher fans to believe in life after love. I believe in the death of that song. Auto-Tune can also save a live performer’s ass in concert.  And yes, Antares makes the type of software responsible for the T-Pain sound that makes you want to jab sharp pencils into your ears. And now they’ve released a PC voice-changing gaming application.

Hit the jump to read our hands-on impressions of Voice Thing.

The Windows XP/Vista software should work with any PC program that accepts an audio input signal. Users simply plug in a microphone, select a preset or twist some knobs, and talk. For most configurations, voice transformation happens in real time.

The Voice Thing Web site has a full two-day unlimited use demo for you to try out. After that, the application costs $34.99 in their Web store. Antares recommends using the demo to test this software’s compatibility with your system before purchasing. I’d go farther than that: be sure to test it with your favorite chat applications before dropping any money. You’ll probably want to read our impressions first, though.

By selecting any number of voice presets, you can change into anything from a robot to a member of the opposite sex. Beyond the typical pitch shifted “chipmunk,” there’s many more, including Clones, Gnomes, Ducky, and even something called DaVader. You’ll like that one best. Beyond the presets are several knobs, like “throat length” or “mutation,” for your experimentation. Between the presets and these knobs, users can create some pretty nifty sounds. Users can also create some pretty annoying sounds.

I want to say that the presets are “hit and miss,” but they’re really mostly “miss.” What’s worse is that several, especially the lower voiced presets, are totally unintelligible. While it’s apparent that this software is for fun, most of the sounds it makes aren’t fun at all, and you’ll find that this ends up being a distraction from your normal gaming or chatting. 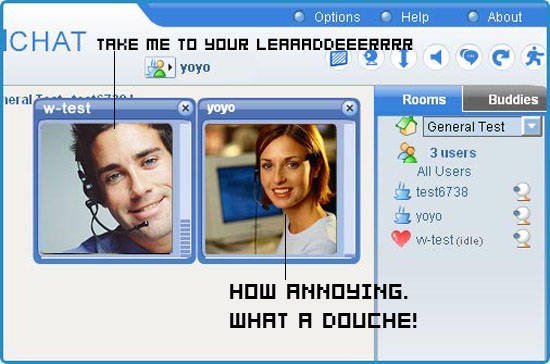 What Voice Thing really counts on is that its purchasers will not take their audience into consideration.  In-game voice chat is annoying enough as it is. A muffled, froggy-voiced player giving teammates important directive is not going to be appreciated by anyone but Mr. Froggy Voice himself. And while neat at first, users run the risk of becoming “that guy” in chat, and it’s only a matter of time before everyone else asks you to “just quit.”

Voice Thing is nifty, but not $35 nifty. There are several other cheaper or free alternatives out there. I thought that, coming from Antares and their professional background and high-end technology, Voice Thing would be completely different from the many other voice changers out there. Sadly, it really isn’t. The presets are hit or miss, and its compatibility is iffy with some programs. I tried surprising fellow podcasters yesterday with this application.  It didn’t work half the time with Skype, and when it did, my fellow podcasters were not impressed at all.

If anything, someone needs to work on software that makes chat talk more intelligible. We need that much more than cartoon voices. As for Voice Thing, it’s something, but it’s not my thing at all.