The Kickstarter is almost up

With Dominion going on ten years now, deck-building is fairly old hat. Once the concept was released upon the world, it blazed through the tabletop scene. Thunderstone and Ascension took the idea to the (yawn) fantasy swords and magic killing monsters theme, and at this point it seems like every big nerd franchise has got a deck-builder. There’s Resident Evil, Street Fighter, Alien, and more. Some games slightly tweaked the formula to be dice pools rather than decks of cards, but the central progression remained the same.

I say all this to illustrate a point: these days it can take a lot for a deck-builder to get noticed. It has to bring something new to the table (hyuk hyuk) and that thing had better be good.

So on the heels of the more recent phenomenon of adventure card games (like Pathfinder or Warhammer Quest), Hand of Fate: Ordeals intends to meld the two mechanics into one smooth game. It does all right. 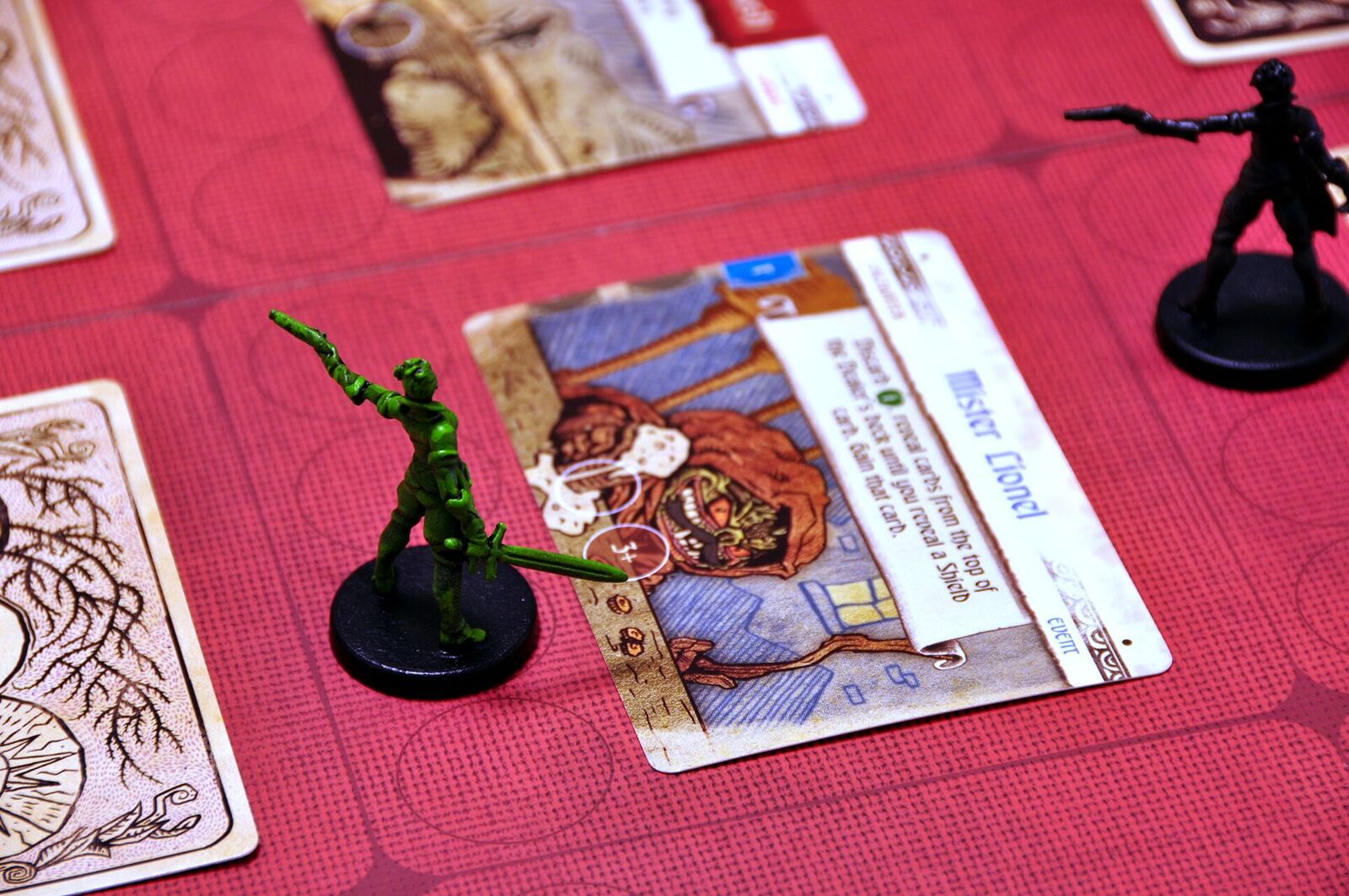 Before I get too down on Hand of Fate, it should be noted that I was provided with an early prototype, with an unfinished set of rules that are subject to change. This could end up being great, but it’ll have to get past a few things holding it back.

In a very familiar start to anybody who has played Dominion, players begin with a set deck of ten cards, from which they draw five into their hands. Playing cards allows players to take food tokens (for movement), build up money to buy upgrades, or increase attack power. At the end of the turn, any cards that were not played are discarded along with any purchased cards, and the next hand is drawn up from the deck.

The cards themselves have a variety to them, with each action card falling in one of three categories. The Adventurer cards often benefit movement or discovering new encounters. The Trickster cards give ways to manipulate hands and decks. The Warrior cards generally focus on dealing more damage to the baddies that stand in the way.

Speaking of the bad guys, it’s worth taking an aside to talk about the enemy design. It’s one of the high points of Hand of Fate. The three boss characters are the Jack, Queen, and King, and since each enemy comes in one of four suits, it gives a cool feel of a hybrid between a fantasy game and a traditional deck of playing (or maybe tarot) cards.

That alone is enough to catch my interest, since most games go full fantasy. Hand of Fate says, “Yes, you’re in this fantasy world, but you’re playing a card game in this world.” It shakes it up enough to not feel stale. The artwork itself helps toward that end, with what strikes me initially as being inspired by those old Japanese ink wash paintings.

Back to the cards, one of the little annoyances my group came across was that although the idea of being an Adventurer or a Trickster seemed cool, the best way to get Fame (victory points) was to kill monsters, so Warrior was almost always the way to go. It doesn’t seem like a balanced strategy is ideal compared to the all-Warrior-all-the-time route. At that point, the decision matrix flattens. 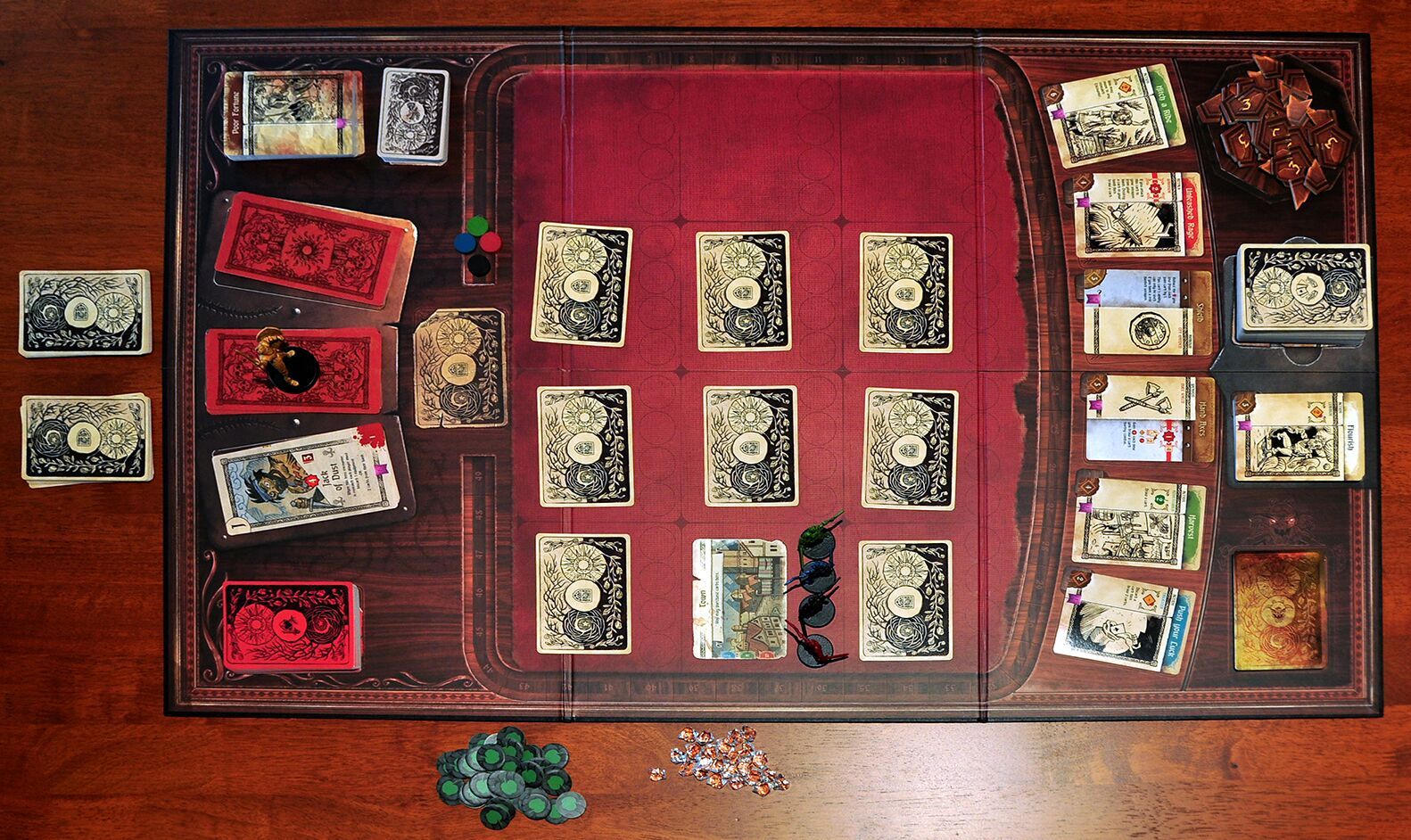 The other niggle we found was in the progression. In the vein of most adventure card games, players could upgrade weapons and armor over the course of the game. The weird bit we ran into is the high randomness for how those pieces of equipment become available. If one player can snag an upgraded weapon early and no more come out for a while, he’s the only one with a good chance taking on enemies. We had one game end with the guy in first at over 50 points and the guy in last at -1, largely due to the unforgiving randomness of the draw deck.

The big thing that feels off the mark is that most adventure card games take players on, well, an adventure. Without much of a story, a campaign mode, or persistent upgrades, Hand of Fate plays less like an adventure card game and more a standard deck-builder. And as far as standard deck-builders go, it’s fine, but it feels a lot like other games I’ve played a hundred times before.