What the hell, how did I not play the first one?

I like to believe that I’m on the pulse of Cool Shit. While Cool Shit means something different to everyone, I include games of all varieties: video, board, card, and Reindeer (just kidding, I’ve never seen that movie and it looks awful). So when I went to GDC to see Defiant Development’s Hand of Fate 2, my initial reaction was “A sinister in-game dealer is forcing me to build a deck of event cards while fighting fools in real-time Arkham-esque combat? Why the hell didn’t I play the first game?” Sitting with creative director Morgan Jaffit, I surreptitiously searched Destructoid for coverage of the original, and only found this. So good work, Darren. Everyone else is fired.

In the month since my appointment with Jaffit, I’ve played through the original both for fun and so that I could better understand how the sequel is improving upon past ideas. Here’s the short of it, since it’s a little late for a formal review: Hand of Fate has a wonderfully simple concept: the Dealer lays out event cards in front of you, and you have to encounter each one. These are framed as small vignettes of an imagined world (or is it from long ago? Or is it happening now? Just who is this bastard dealer?) and mechanically play out like choose-your-own-adventure stories. They’re mostly brief and lead to either new weapons/armor/trinkets, or a loss/gain of health and food.

Those weapons are used in combat that feels like Arkham-lite. There are counters, dodges, stun attacks, weapon abilities, and the like, but they never feel entirely satisfying to use. Each fight requires you to defeat all of the enemies and bosses, and their varying abilities and behaviors aren’t quite enough to staunch off inevitable repetition. My other quibble was the normal difficulty errs on the side of too easy, and the next one up is too much of a jump. Even so, the original Hand of Fate is stylistically clever and unlocking new cards was enough to keep me hooked until the end. 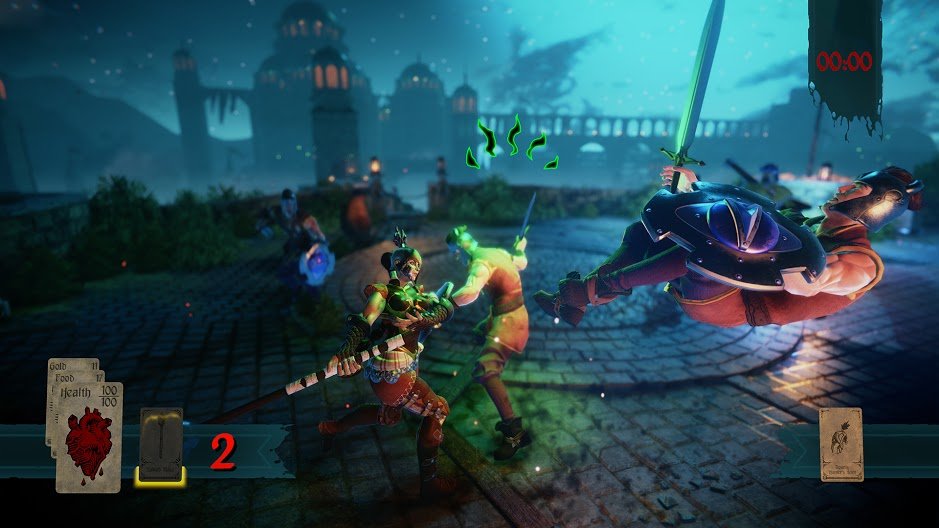 Jaffit tells me right away that Hand of Fate 2 is not going to be a reinvention of the series: Defiant is aware of the issues that players encountered in the first game, and it has all sorts of cards up its sleeve to throw more appealing flesh onto admittedly strong bones. BOOM, thematically-relevant pun and macabre metaphor taken care of. Playing as a new female protagonist (the beardy guy players inhabited in the previous iteration is now a villainous tyrant for reasons), Jaffit showed me the biggest additions that will keep monotony at bay: companions, quest variety, and silver/gold cards.

The only companion shown thus far was Malaclypse, a “mage masquerading as a bard to hide from the Empire’s ban on magic.” This goofy dude was helping Jaffit in battle by way of protecting him with shield spells as he defended townspeople from a never-ending onslaught of enemies for a set amount. In this brief encounter, having a helper and doing something other than clearing out all the baddies already looked more enticing than what I’ve since played in the original. There will be more of these friends, and they’ll also have an effect on the board game/deckbuilding by way of additional story options and even their own quest lines.

Hand of Fate 2 will also be less about assembling the strongest hand possible and hoping for the most powerful cards to be drawn first. All decks can now contain only two silver cards and one gold card, forcing players to focus more on the composition of their deck and coming up with effective combinations that suit personal preferences. Jaffit expressed a mix of enthusiasm and curiosity when imagining the types of decks that craftier players will create. 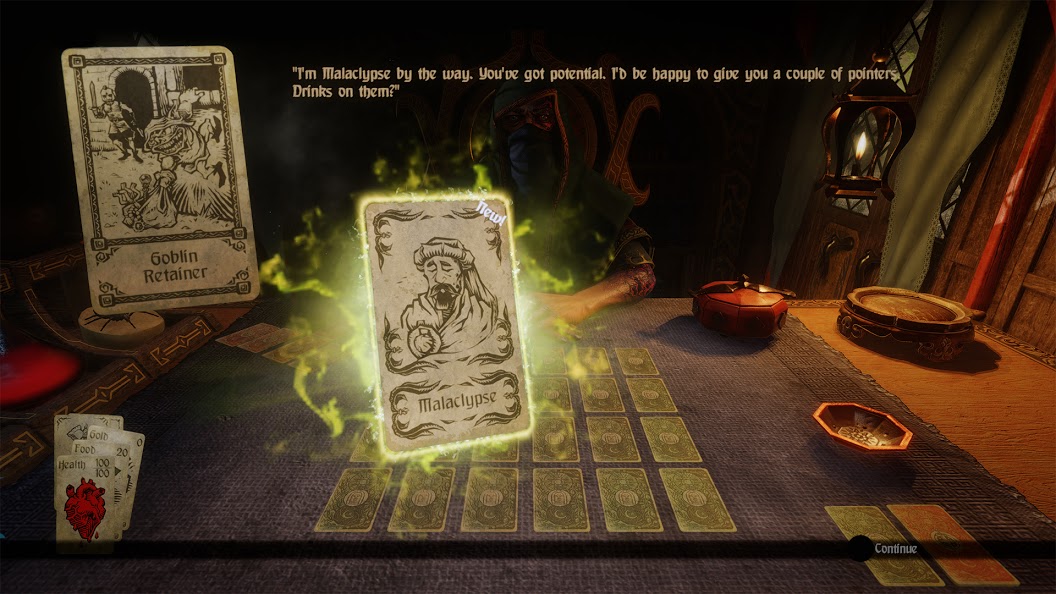 There’s also a general heaping of More when it comes to all other aspects of the game: more ways of shuffling success and failure cards, more enemy Suits (Steel and Blight, which are soldiers and mutated men, respectively), new weapon types in the form of two-handers and dual-wielding, and more challenging quests such as surviving ten floors of a dungeon. While I opted to watch Jaffit play instead of doing it myself since I hadn’t played the first one at the time, combat also looked more satisfyingly chunky, so my main complaint seems to have already been addressed.

Sure, sometimes we expect sequels to reinvent the wheel, but in Hand of Fate‘s case, I’ll happily drink down a much-improved sequel. If Defiant pulls off the numerous upgrades it’s planning, I’m going to be a happy man early next year.