There’s a lot of the familiar, though

It was one year ago when I sat with 343 Industries as key developers told me all about the studio’s plans for The Halo Channel. At the time, Halo 5: Guardians was more than a year on the horizon, and Halo: The Master Chief Collection was set to bridge the gap caused by a standard development cycle. It seemed like Microsoft wanted more Halo all the time.

That mindset will define Halo 5. In a gamescom meeting with executive producer Josh Holmes, he made it clear that this is the biggest Halo game ever. The campaign is roughly twice as long as Halo 4‘s. The multiplayer is larger and more detailed than it has ever been. More, more, more.

Holmes explained that the game was built with multiplayer at the forefront, but that’s not to say the campaign is an afterthought. Multiplayer has a strong presence in all components of Halo 5. Even the solo missions have four players at all times, whether they’re real-life buddies or a Firefall team made up of AI partners. 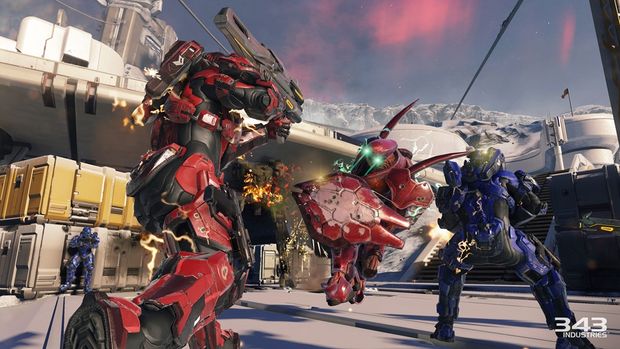 Longtime Halo players might find this change jarring or even possibly off-putting. There are people who pride themselves on getting their way through the story on legendary difficulty, trying again and again until they finally hit the next checkpoint. Halo 5 could render that sensation largely moot thanks to a new revival system that’s akin to the one in Gears of War. It gives second chances, something that Halo hasn’t really done before.

Design director Brad Welch says he doesn’t think that will be the case. He commented that those who are playing on those higher difficulties will find a familiar level of challenge. “We’ve approached Halo from a completely new perspective,” he said. “It might take people a little while to adjust, but we’ve worked for a long time on the balancing,” he offered as he explained that being careless with your teammates will just lead to everyone dying rather quickly. Once that happens, it’s right back to the checkpoint.

There’s a similar AI implementation in multiplayer that’s a departure from what everyone has been used to. The 12-on-12 Warzone mode will feature computer-controlled bosses and defenders, as opposed to humans dictating all of the action. Again, Holmes and Welch say it’ll take some getting used to, but this expanded game is their vision for Halo 5.

Warzone’s particularly significant in that it’s one half of 343 Industries’ initial multiplayer push. Classic four versus four arena play is available for purists, but Warzone is the mode for those who want action in larger numbers. Holmes explained that they designed these two kinds of multiplayer with two different types of player in mind — that’s why they’re distinct styles.

In fact, Warzone is such a priority that 343 is launching Halo 5 with it in place instead of Big Team Battle. However, Holmes clarified that Big Team Battle would be implemented within weeks of release. This is rather indicative of the developer’s approach to post-launch content. Halo 5 will ship with 20 maps, but it’ll eventually grow to around 50 — all of those being added for free. Holmes elaborated that he wanted to get away from paid map packs because those do nothing but segment the community. He wants everyone to be able to play with whomever they want without putting that access behind a paywall.

It’s ambitious for sure, but everything about Halo 5 is ambitious. The sheer scale of it all tips its hand about that. 343 Industries and Microsoft are both on a mission to make a lot more Halo, and it looks like they’ll accomplish that goal in the short-term — even if it means players will have to make some small adjustments.