Note Worthy 014: Soundtracks you should be listening to!

Welcome back to Note Worthy, our monthly soundtrack round-up. This issue marks one year of Note Worthy, and I’m changing up things a bit with formatting. In the past, I’ve featured our ten monthly reviews in alphabetical order, giving each album equal weight, but I want to experiment a bit with this format and present it in a way that lets readers sift through and pick up on the most important releases of the month first with a more in-depth look.

With that said, Halo 4 Original Soundtrack Vol. 2 gets top honors this month, as it provides everything that was missing from the first volume in terms of ambiance and bad ass soundscapes. Other notable releases include Magical Chase and Final Fantasy XI: Seekers of Adoulin.

As always, enjoy streaming samples courtesy of our SoundCloud account and let us know what you think of the new format! Here’s to another year of Note Worthy! 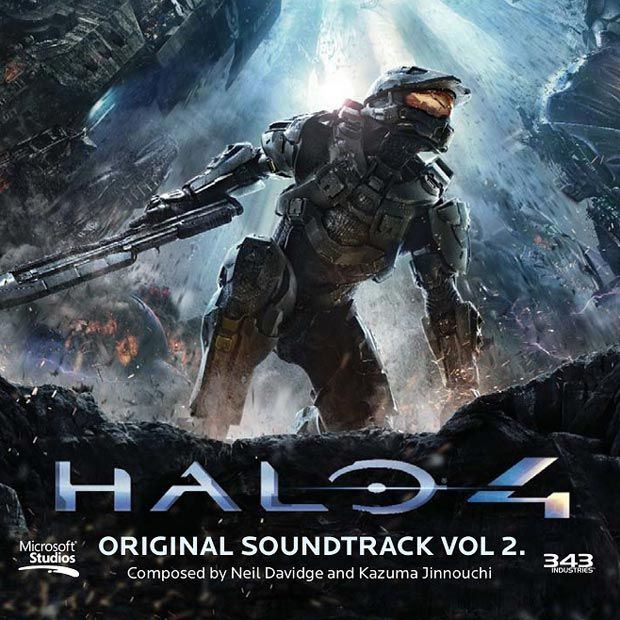 I’ve been waiting for this album even though I never knew it was coming. I enjoyed the Halo 4 soundtrack, but did feel it was a bit too cinematic. It contained only a fraction of the in-game soundtrack and was meant to tell the story of the game through sound. That makes Volume 2 the perfect place to explore the amazing atmospheres that Neil Davidge and Kazuma Jinnouchi were able to create for the game. This album is much darker and much more atmospheric, featuring lots of orchestral elements with interwoven electronics.

Half of the tracks are provided by Jinnouchi, who was mostly absent from Volume 1. His opener, “Atonement,” will have you thinking of Halo soundtracks of old with its use of choir, and he even goes as far as to remix a past Halo track. From there, we launch into chugging electronics with heavy-hitting bass in percussion in “Intruders,” “Mantis,” with added glitchy percussion, and “Gravity” with its ominous pulsating bass synths.

Davidge returns with similarly-cool soundscapes. “Kantele Bow” and “Pylons” give off a very bad ass vibe along with “Convoy,” which really gets down to business and reminds me of some of my favorite Halo moments. I love the siren-like sounds in “Escape,” the reverberating electronic tones in “Swamp,” the familiar tribal percussion in “Push Through,” and the Metroid-esque ambiance of “Foreshadow.” Finally, “Aliens,” my favorite track on the album, sports deep bassy tones and exotic female chanting.

Halo fans who didn’t appreciate the Halo 4 soundtrack last year will want to give this album a try. It more effectively combines the old and the new quite nicely, and having played the game, I knew these moments were in the game despite not appearing on the soundtrack album, so I’m happy to be able to enjoy them outside of the gaming experience. 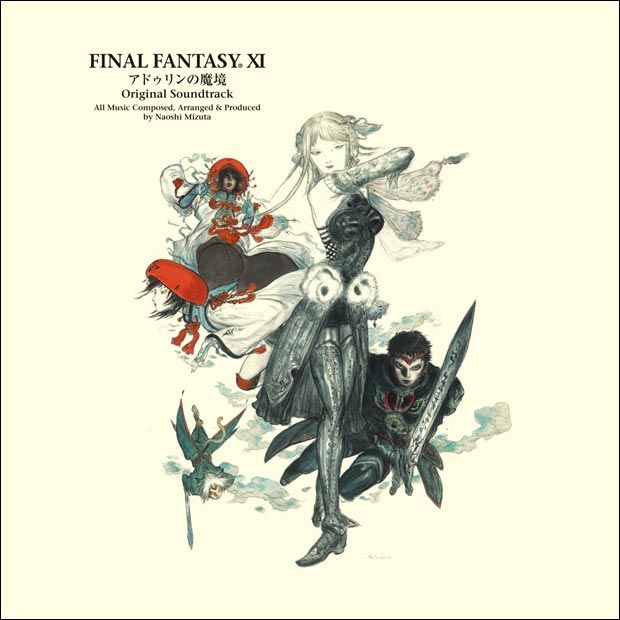 We posted about this album a few weeks back, and with its lovely packaging and over 50 minutes of new music, I have to say this is the most excited I’ve been for new Final Fantasy XI music in a while.

After an upbeat orchestral opener titled “A New Direction,” the album launches into a number of playful tunes including the adventurous “Breaking Ground” with its funky slap bass, the fun rhythmic pizzicato strings in “The Pioneers,” the prehistoric vibes of “Into Lands Primeval – Ulbuka” with its bongos and bell tones, and the relaxing tropical escape, “Mog Resort.” My two favorites are “Water’s Umbral Knell” with its abstract use of water drops and metallic bell tones that are dark and unsettling and the decisive and foreboding “Hades.” Two bonus tracks, likely from content updates between major expansions, are also appreciated inclusions.

This price is right with this one. Naoshi Mizuta continues to grow with the series and shows off some of his best. 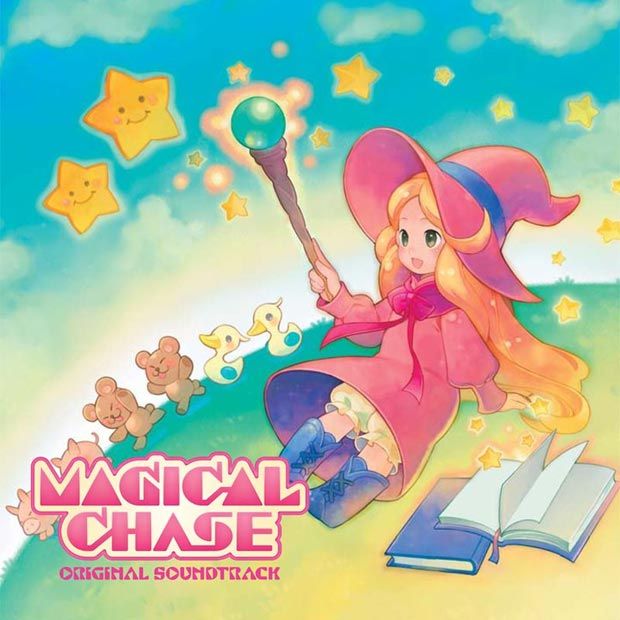 Get ready for a history lesson. Back before Hitoshi Sakimoto and Masaharu Iwata became known for their orchestral RPG scores for Ogre Battle and Final Fantasy Tactics, they worked together on this PC Engine shmup title that earned quite a following for its vibrant visuals and upbeat and bubbly soundtrack. Yes, Sakimoto and cute videogame music.

If I had to pick a title that this music most closely resembles, it would be Fantasy Zone, which I also love. From the incredibly catchy chorus section of the first stage theme, “Rampish Chase” to the playful “Ripple’s Theme,” there’s lots of sticky sweet melodies to enjoy. Then there’s the rambunctious “Azure Way,” the decisive “Waltz of Meditation” that hints at the Sakimoto/Iwata that would appear in later years, the chippy final stage theme, and boss themes that will have you bopping your head. The ending theme is also incredible.

And that doesn’t even touch on the 26 minutes of arranged and unused tracks provided by Basiscape Records to commemorate this album. There are five arrangements in all, updating the retro sound of the originals with orchestral or electronic sounds, although Sakimoto’s Sakimoto-esque version of “Ripple’s Theme” is probably my favorite. The undiscovered tracks are similar to other tracks found on the album, so no biggie.

I’d always heard about this game and soundtrack. After listening and watching some gameplay videos, I want to play it. If you’re a fan of Hitoshi Sakimoto and Masaharu Iwata, you need to pick this up. It’s a piece of history and it’s amazing that it’s finally out there.

Yogurtbox is back. Well, at least half of it. We’ve featured coda a few times here on Destructoid, and this time he’s bringing his chiptune magic to a game soundtrack courtesy of Ubiktune. In addition to providing some upbeat and pumpin’ chiptune action with a swagger (the pop-oriented and super catchy “Sweet Home” and powerful epic final stage, “Void,” being my favorites), there are also some fantastic remixes from other artists including the amazingly talented kulor, Madbrain, Blitz Lunar, and DJ Bouche. All for name-your-own-price, so do it now.

We need to give Ankama’s Guillaume Pervieux some love. He wrote a lengthy and amazing score for the beautiful Islands of Wakfu a couple years ago, and his latest work for Fly’n will also surprise you with its eclectic and abstract electronic soundscapes.

The meandering and gamey opener, “Adcoffe,” hints at aural joys to follow which include the tense yet playful “Andndamm,” the bassy chill-fest “Yservat,” the Radiohead-esque “Sonwide,” the comical and mischievous “Fucus,”and the dreamy and psychedelic “Oysicide” and “Carbonic.” There’s lots of gamey stuff and other more serious electronic music, but it’s all great, and there’s nearly two hours of it. Check it out.

I admit that my primary draw to this game was its soundtrack by Final Fantasy composer Nobuo Uematsu. I’ve since found myself interested in the game’s world and characters more so than the music!

What you have is a lot of bubbly electronic music and typical JRPG rock themes. That’s fine, as that’s what we know and love Uematsu for, but this isn’t his most inspired work. The upbeat tunes fit the game’s visuals and quirky sense of humor perfectly, but the sticky-sweet melodies lack substance and memorability. Aside from several character theme remixes from previous titles (“Rom’s/Ram’s Theme ver. V” is particularly cool), you’ll mostly want to keep your ears peeled for the Japanese-flavored “The Rock Garden” and the Earthbound Papas rockfests, “4th Dimension” and “Invader 1960,” but I wouldn’t feel too bad if you missed out on this one.

Final Fantasy: Mystic Quest is one of my favorite games (ridicule all you want!), and that’s in large part due to the game’s amazing soundtrack. In fact, one of the highlights of my many years writing about game music was an interview with the composer about this game.

It’s heavy metal rock in game music at its best, and Daniel Tidwell (previously of Lords of Thunder) has given it a fitting tribute with some amazing guitar solos and great metal production work. You get the game’s three battle themes as well as the epic final dungeon and rockin’ “Lava Dome.” Thanks to Nubuwo for turning me on to this one.

Here’s another round of original electronic music from SuperSweep Records.

In what’s probably my favorite NanoSweep to date, I loved the hell out of the dreamy chillout track, “Focus,” and the super funky “Oscillation” which features some great rhythmic electric piano. Ayako Saso’s appropriately-titled “Patchwork” combines a lot of different ideas, the most interesting of which is a modified female vocal section that reminds me a lot of The World Ends With You, while Hosoe himself closes out with “Killing Terramorphous,” a hammering electronic track that gallops along with mind-crushing bass synths.

Overdrive Hell 9 yields an ethnic experience focusing on what sounds to be Indian music. Lots of vocals abound with the lovely “Ethno Vibration,” which is pretty tame by overdrive hell standards. “Curry Burns,” “Screaming Yoga,” and “Go Go West” get back on track, however, with crazy effects on the vocals and throbbing bass drums that never let up.

As always, these are hard to come by as they’re sold at events in Japan, but they do exist!

This month concludes my look back at the PixelJunk franchise. Sidetracks is similar in style and even borrows a few tracks from PixelJunk Shooter (including an even more laidback version of “Fotographik,” my favorite track from that album). There’s the grungy opener, “Dog is No Hero,” which combines rock and electronic elements, but aside from this and the glitch rock track, “Zodiac 3 Arts Klub” with its catchy male chorus section, it’s mostly an icy trip-hop affair.

“More or Less” is a perfect example of chill hop with its snazzy hip hop stylings, while “Planet Thanet” brings in alien-sounding synths, “Ghetto World” gets funky bass and percussion, and “MNP” goes for a spooky vibe with lots of weird sound effects and organ. The two remixes featured of “Planet Thanet” and “More or Less” get more icy ambiance and reverb, and are nice additions.

As my favorite tracks from Shooter are also presented here, this is definitely by favorite PixelJunk soundtrack to date. We’ll see what the future brings!

We reviewed the limited edition soundtrack disc last month, and this is the follow-up review of the stand-alone release containing twenty tracks as opposed to ten. Everything said last time remains true: this is a wonderful soundtrack full of tense moments that covers the Tomb Raider setting perfectly.

Key tracks from the beginning and end were featured on the other album, so this fills out things in the middle with plenty of great moments that include the ominous “Exploring the Island,” the ambient percussion and bassy didgeridoo of “Infiltrating the Bunker,” the buzzy and tense “The Scavenger’s Camp,” the emotionally-tinged “On the Beach,” and the fantastic rhythms of “The Oni.” This is the definitive way to enjoy this soundtrack if you have the LE and wanted to hear more, if even better, if you don’t own the soundtrack at all.