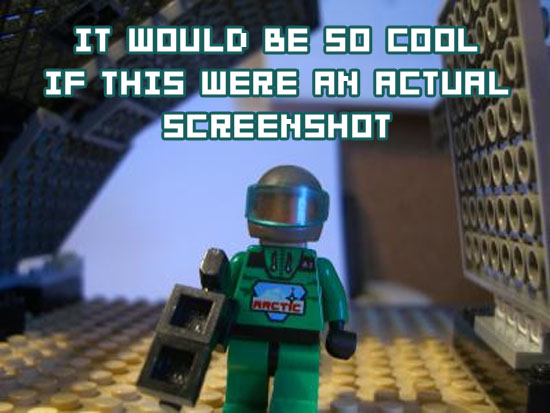 So have you got Teh Haloes? Yes, no?

I haven’t. Even though I’ve yet to hear a recommendation against it; even though it is, by all accounts a solid game, and by some accounts, a revolutionary game. Most of all, I’ve yet to see a heavily critical rating.

So why aren’t I interested? Hit the jump; maybe you can tell me.

I’m not really a Halo fan.

I’m just not big into FPSes to begin with. Moreover, the Halo series always seemed to me to be, well, nothing special. Would I have played Halo 3 had it been given me? Probably. After all, it’s my job to be “up” on these things, right? Arguably, it’s rather unprofessional, maybe even irresponsible of me to overlook it.

In trying to parse out what my resistance to the whole Halo 3 fetish is all about, I’m sure it’s just a little bit of snobbery. Generally, I know I won’t like something if the mainstream culture is insane over it. There’s no faster way to turn me off to, say, a book, if everyone on the subway is reading it. Little bit narrow-minded, little bit arrogant, I know. Part of me resents that I spend a good portion of my career trying to create a bridge between the very niche practices of gaming and our culture at large, and yet there’s a large portion of the population — the majority, probably — who, when asked to name a “good” game, only knows Halo, which in being fairly formulaic thematically is a rather poor demonstration of what games are capable of (beyond graphics and gameplay) and what they can mean.

Another part of it is that my colleagues in the games press seem, unreasonably, to have lost their head over the game. As GameCritics’ Mike Doolittle points out, amid all the hype the reviews of Halo 3 have scored unusually high. 1UP gave it a 10/10. Ten out of ten — that should be perfect, right? Yet, in that same review, Hsu says, “”…in Halo 3, the big ‘oh wow!’ gameplay moments just aren’t there.” Beyond gameplay, the review also notes, ” While the plot’s conclusion more than satisfies, the action is…well, it depends on how you come at it,” and later adds, “…campaign mode either delivers what’s expected or delivers that very well, but anyone would be hard pressed to call it mind-blowing.” Not mind-blowing? You know, like, it could have been better? Why the flawless rating, then?

To be fair, I think that scoring games is enormously archaic, a convention designed to pander to a not-so-thinking audience (read: us as impatient children). Now that games are as complex as they are, scoring is much more arbitrary and ultimately, I feel, useless. I score every time I review; I have to, that’s the way it’s done. But what do I do with a game that has a sucky mechanic and awkward controls and beautiful graphics, music and story? What about flawless, fun gameplay against a story pacing that falls apart in the middle? I suppose that comes down to subjectivity — I once rated Rule of Rose somewhat high, for example, because of an airtight thematic presentation, a rarely-seen thread of stylistic innovation, a cool story and most of all, the way it challenged us to rethink somewhat our feelings on right and wrong, comfortable versus uncomfortable. Would I recommend it to someone whose idea of the perfect game is Halo 3 or Gears? Hell frickin’ no. The gameplay was crap, and it got shredded among the mainstream games press for that.

Even if you’re an enormous Halo fan, I think it’s hard to argue with the perception that what with the advanced press, inflated reviews and hype, the game’s enormously overrated, in the purest sense of the word. Perhaps if Halo 3 is going to serve as an ambassador to the uninitiated, I shouldn’t look a gift horse in the mouth; maybe knowing that a broader section of society is playing a “hardcore game” should be good news to me. But I’m less concerned with how the game affects people outside of our sphere than the way it affects those inside it — other reviewers, and other gamers. Linde gave Halo 3 an 8.5, a healthy score for a game that many people have allowed meets, but doesn’t exceed expectations. And yet, some of you guys gave him a hard time for not ranking it as high as other recent titles that you felt were not as significant.

More than that, I feel that if the games media can be so easily manipulated, we’re not doing our jobs; it’s as simple as that. Last night I was writing up some analyst comments for Gamasutra and included some quotes from PRWeek, which covered the multi-pronged, three-team PR initiative for the game:

Hufford said the goal of the PR campaign was to convince the general media that the launch of Halo 3 is a “cultural milestone” and as significant a part of the entertainment industry as a Harry Potter book release.

“Our great challenge was to convince the broad press that it was something to be celebrated at a cultural level,” Hufford said. “A lot of the journalists that we speak with and their editors think of video games as something that only kids are doing and participating in. So our challenge was to go out and speak to various editorial boards to convince them that this was something of greater significance. And we spent a lot of time starting last January right up until last month, really going deep with many outlets to set the stage for bigger signature stories.”

Hufford admits that he really dug in to some of my colleagues to frame large coverage. And granted, I know that the games media must always give its audience what it wants, in excess, even when we know it’s overhyped. There’s a huge portion of the audience who, if they can’t read ten daily updates on Halo or Bioshock or Silent Hill V will go elsewhere for coverage, and since our profession is highly oversaturated, especially on the internet, that’s a problem. I understand that.

I don’t believe that every game needs to be deep, transporting, a revolutionary exercise in social magnitude, or anything at all. On the contrary; sometimes, the best titles are the ones that are simply solid and fun, and from what I hear, the Halo series is all of that. But is “nothing really wrong with it” truly worthy of such epic levels of praise? Is game design really that generally bad — or are we just that easily influenced?

What, exactly, about Halo 3 has “greater significance,” makes it a “cultural milestone,” besides the sheer size of its audience? This isn’t a facetious or rhetorical question; I really want to know. Am I being closed-minded and ignorant here? Seriously, enlighten me.

I suppose it would be fruitless for me to request that some of you keep your panties on and your heads on straight; justly or unjustly, this is a touchy topic in our world. Bear in mind, though, that blind frothing off at the mouth merely confirms the irrationality of questionably high opinion of the game.