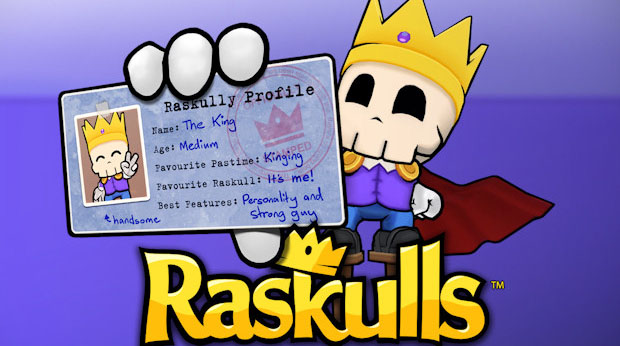 Raskulls is a game we’ve been keeping a very close eye on at Destructoid. Halfbrick Studios’ upcoming XBLA game is cute, funny, and looking to be a delightful mix of platforming, racing, and Mr. Driller block breaking. I think it will rock, but I’m not doing all of this game’s PR work for it. I had Halfbrick itself explain the game.

“Skeletons get such a bad rap these days,” says Halfbrick’s Phil Larsen. “How come every time you see a skeleton, he’s running around with a sword and a shield or trying to be scary or something like that? It’s prejudice against skin-deprived members of society, and we wouldn’t stand for it. So, naturally, our artists created the Raskulls as you see them today, and they’re both cute and badass at the same time. That’s what the main character, King, is all about.

“After a long session of online shooting or RPG-ing, it’s often common to unwind with an XBLA game. All too often, though, there isn’t be a suitable game that either A: won’t be a timesink or B: you’ve exhausted all its possibilities. Raskulls solves that problem like double bacon beef burgers solve hunger. Quick, fun and ultimately delicious, but there’s enough content to keep playing for hours if you want to.”

Hit the jump for more, where Phil talks to us about the game’s modes.

Here’s what Phil had to say about the game’s two main modes, Mega Quest and Grand Prix:

“Mega Quest: This is the main adventure with over 60 levels across three chapters, telling the story of King and his quest to save the Raskulls world. It’s very funny and we’ve polished it with great dialogue and cutscenes which keep the action flowing. It will take you roughly 4 hours to complete your first time through, but there’s replayability with extra items to collect and bonus challenges. Not to mention Leaderboard levels and high scores to dominate your friends and/or well-wishers.

Levels will take several different forms as each level is filled with bright and colorful block formations which help and hinder your progress. Some levels simply require you to advance to the end, but then we’ve mixed it up by adding time limits, racing against other Raskulls, combat items and Frenzy boosters. The blocks are there to ensure every level plays differently and there are 10 gameplay variations players will encounter over 60 levels of the Mega Quest.

Grand Prix Mode: This is sixteen levels across four Grand Prix matches. You can play through them in single player collecting medals and beating each difficulty level, or in multiplayer either locally or online.”

Destructoid will have more from Halfbrick later, and we will also be playing Raskulls very soon! Stay tuned for that.