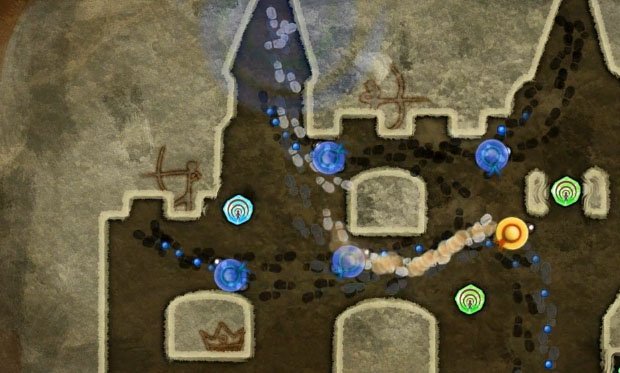 Halbrick isn’t just working on Raskulls for Xbox Live Arcade. The Australian developer has also set its sights on the PSP and its new PSP Minis initiative. Despite what you and I may think of the expensive, mostly rubbish service, Halfbrick’s Phil Larsen believes the service is impressive, and wants a slice of the action.

“Sony is really impressing everyone right now with the positioning of the PS3 and PSP,” explains Larsen. “The gamers are noticing it, and as developers we certainly want to make sure our games have good support. Sony is stepping up to the plate and saying they are open for business, so we want to start off by giving our PSP Minis a try. We have developed several original games which will be perfect for PSP Minis, and two are ready for release – Echoes on November 19th, and Blast Off on November 24th.”

Halfbrick has developed games for Xbox Live’s Indie Channel, and so I asked if the studio felt other XNA developers would jump on the PSP: “PSP minis is being driven by Sony in every way, and that includes submission and certification through official channels. Anyone who has a creator account can review Indie Games, and it’s largely driven by community developers and hobbyists.

“If those developers want to work with Sony directly and adhere to their guidelines when it comes to game submissions we could see a few titles crossing over. Sony wants to find a middle ground between affordable casual gaming not unlike iPhone and XNA, but they are also after highly polished products. A number of great iPhone games are becoming Minis, and we’re happy that our games have the chops to become available on the PlayStation Network.”

Hit the link for more.

The PSP has stiff competition from Apple, and the PSP Minis seem to be an answer to the iPhone’s Apps, despite being considerably more costly. Larsen does not believe Sony is trying to compete, but he does believe the PSP has potential to gain more ground in the portable warzone.

“I don’t think anyone is expecting Sony to trounce the iPhone or anything like that, but there are a lot of PSP owners, and a lot of PlayStation Network users, so with the right games at the right price we could see some ground being gained,” explains Larsen. “It’s just that the iPhone is so different with touch-exclusive controls and many other network capabilities, whereas the PSP, while a multimedia device, is still considered to be primarily a gaming platform.

“Which is fine, and could work to Sony’s advantage with their more traditional position. People just need to recognize those differences and form realistic expectations that at the end of the day, both PSP minis and the iPhone will have sweet games.”

What do you think of the PSP Minis service? Has it impressed you so far, or is it merely potential that Sony won’t capitalize on, as is often Sony’s MO?