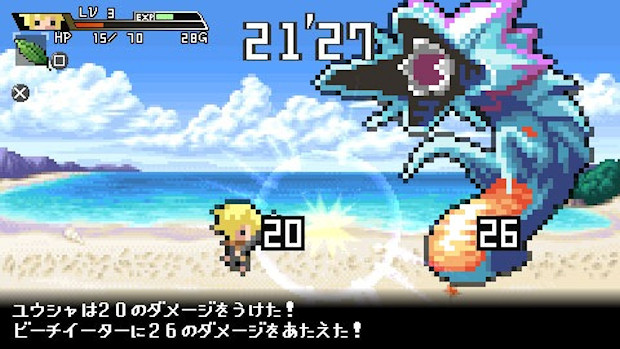 HALF-MINUTE HERO! Yes, the game deserves an all-caps introduction because I am that excited for its release. The game’s looked hot ever since it was first announced, and the PSN demo sealed the deal. In case you’re unaware of what Half-Minute Hero is, it’s a game that gives you thirty seconds to complete an entire RPG experience. Level up, shop for items, and destroy the ultimate evil in half a minute to win.

It’s amazingly versatile and the ability to extend time lends a terrific puzzle element to proceedings. I have a feeling it’s going to be an absolute standout PSP title this year, so I’m itching to play it. The wait’s not too long, either, with Xseed announcing an October 13 launch date.

If you’ve not downloaded the demo, do it. You’re a f*cking idiot if you have a PSP and aren’t trying this game out.