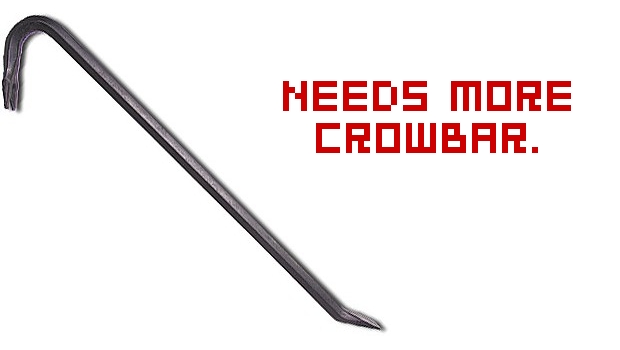 The guys (and one attractive girl) at Waterloo Labs like showing people how to do cool science-based projects on the cheap. For instance, if you have a large wall you can shoot, something to shoot at the large wall, a projector, a few accelerometers and the ability to hook it all up to a fancy computer you too can play Half-Life with real guns/rubber bands/rocks/anything you want to hurl at a wall including shovels. In the video below you can see how these rogue scientists put together everything that was needed so that one can truly use a real gun (or any object) while playing Half-Life and then went on to waste the entire experiment because they didn’t bring a crowbar with them.

If you want to do it yourself then head over to their site, but please for the love of everything that is holy do not use real guns. You will most likely not only hurt yourself and others, but also single-handedly set the gaming industry’s right to free speech back 10 years.

Speaking of that, Gizmodo had the bright idea of sending the video over to Jack Thompson who, as is par for the course, completely missed the point and instead commented on their headline for the article which read “Half-Life Played With Real Guns Is Jack Thompson’s Wet Dream.” Sarcasm flying so far over Thompson’s head that he probably thought it was a plane, he responded that “Something that further glamorizes killing humans in virtual reality would not be my wet dream. That would be Strauss Zelnick’s wet dream.” I wonder how you sign “You’re an idiot” in ASL. Check out the vid and Thompson’s full response after the jump.

John, you’re terribly confused. Something that further glamorizes killing humans in virtual reality would not be my wet dream. That would be Strauss Zelnick’s wet dream.

I’m the guy who opposes this stuff, who has lobbied against it for ten years, and who has been doing everything I can to stop massacres, not foster them.

So just how would what I oppose give me a wet dream? And why would you use such a gross image?

Well, the answer to both questions is in this answer: You have no earthly idea what you are talking about and you have a Jack Thompson obession.

Please report my response to your idiotic headline.