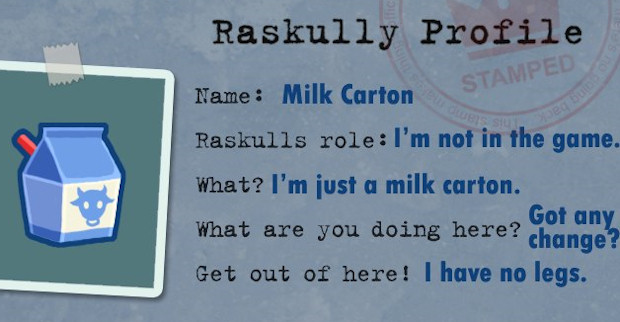 When we revealed the previous batch of “Raskully Profiles” for Halfbrick’s XBLA debut Raskulls, a number of posters demanded that we see less concept and more in-game material. Halfbrick listened, and has decided to get all remaining profiles out of the way now.

These character introductions were originally going to be more staggered, but due to your feedback they’ve all been released today, with screenshots promised to come our way within the next week. Popular opinion wins the day!

Once again, these profiles are adorable and quite funny, so make sure to check ’em out. Apart from Milk Carton, I think Koala may be my favorite. According to Half Brick, his main method of attack is to insult your dress sense and belief system before running away in the traditional Australian fashion.

I’m loving the sense of humor and character that Halfbrick is putting into this game and can’t wait for the screenshots. We’re told a trailer is also coming in the near future, so we’ll hopefully get to see the game in action very soon.