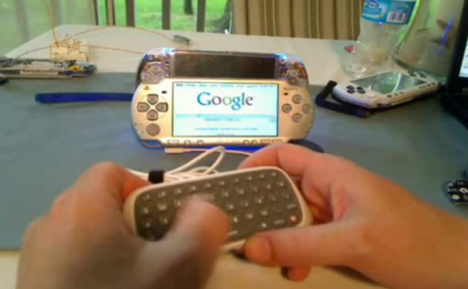 The wonderful world of PlayStation Portable hacks has brought us many things, including the ability to control hobby helicopters. The newest hack by L0rdnic0 is less cool in theory, but increases what one can do with the Internet functions of the PSP tenfold. The hacker has managed to integrate an Xbox 360 chatpad with the PSP, thereby allowing the user to type to his heart’s content.

I won’t pretend to know how this stuff works, but with a little bit of imagination, solder, hacked software, and a push by a hacker named l0rdnic0, a wonderful marriage has been achieved on the PSP. In the YouTube video of the hack after the break, you can watch as the person navigates menus, types in searches, and uses some sort of MSN Messenger application fairly flawlessly. It’s cool, and it obviously works.

Aside from great, compelling games (LocoRoco 2,) the one thing I have always wanted from my PSP is a tool that would make the Internet functions more streamlined. I appreciate the browser, but it simply just takes too much time to search the vast depths of the Internet. This is probably all tied into the fact that I can’t text message without having to sit down for ten minutes so I’m stoked about this accomplishment.