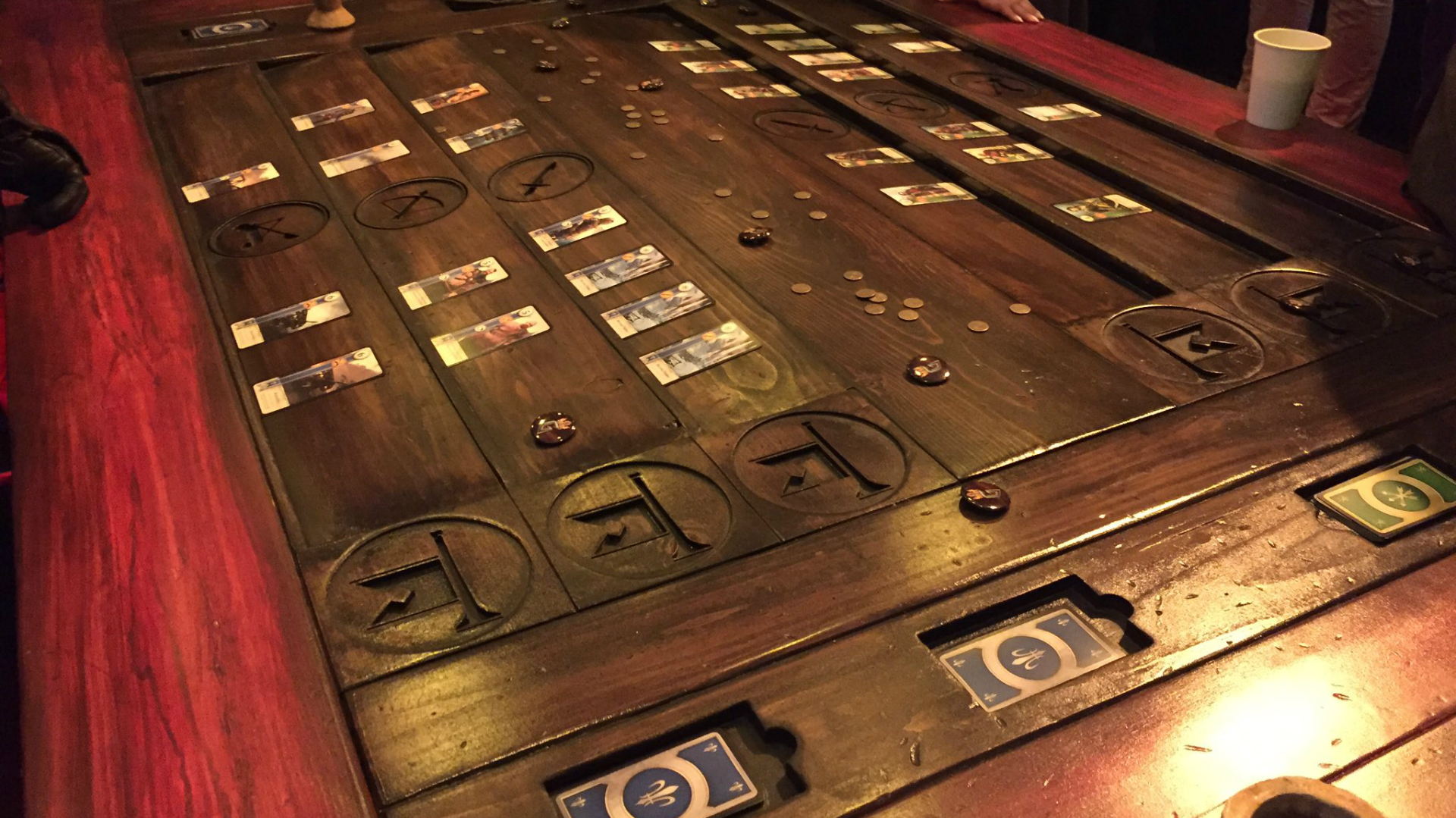 Move over Triple Triad, Gwent’s the new kid in town

My love for Gwent, the card-based mini-game in The Witcher 3: Wild Hunt was pure (unlike horny-as-heck Geralt), driven by a childhood playing Triple Triad in Final Fantasy VIII. Like many others, I spent a sizable amount of my already-lengthy playthrough of that game challenging every dirty peasant and preened lord to a card game, something I never thought I’d do again.

And now CD Projekt Red has decided to grant Gwent the power of italics, and transmute it into Gwent: The Witcher Card Game, a standalone free-to-play card game that has absolutely no business as being as incredible as it looks. 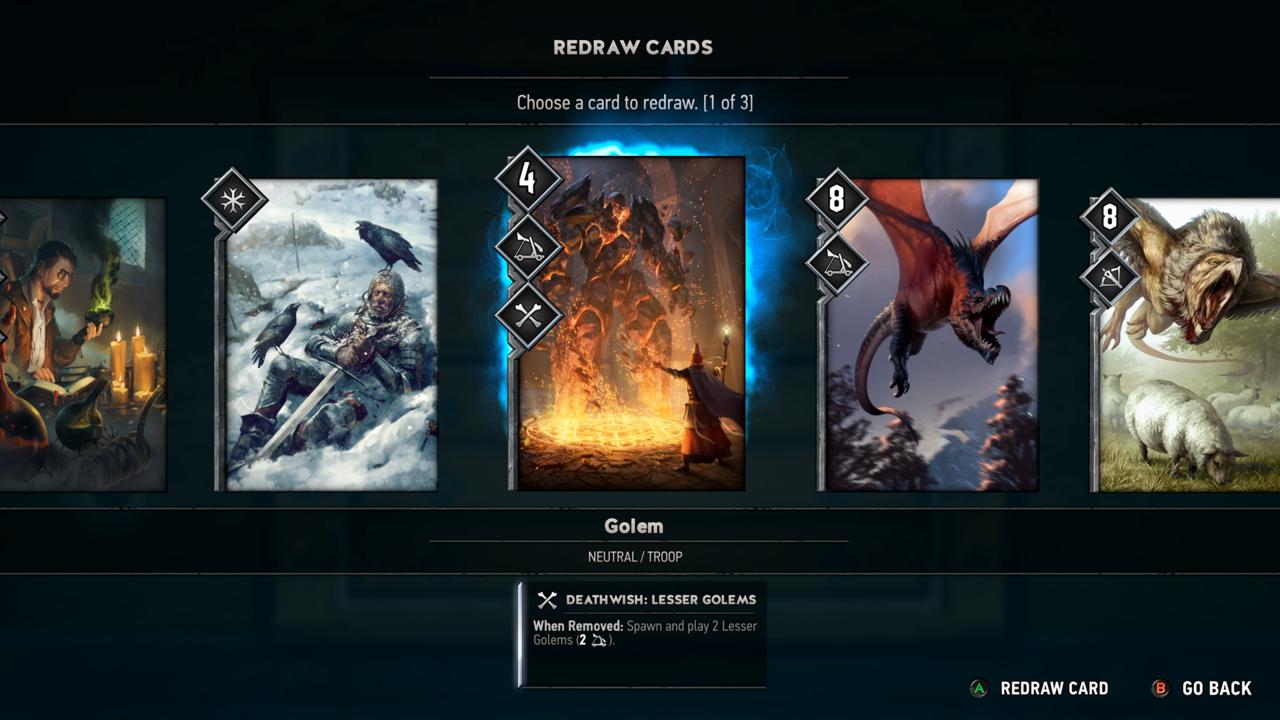 During an E3 presentation, I was impressed by just how sleek Gwent looks in its new form. The original mini-game was functional yet drab, but the same can’t be said now that pleasant animations and a cleaner interface have been added. Despite added depth to strategic choices being introduced, there’s a clearer visual language that prompts a more immediate understanding at a glance. Some of the better cards even have animations on them that bring to mind the living portraits in Harry Potter. It makes your Big Nasty cards even more daunting and exciting to play.

A small part of me was not incredibly interested in playing against a live human being. That small part of me is also known as “Zack being petty because he likes winning, and his chances are much higher when he can trap the AI with certain strategies.” That all changed when I was able to play with someone sitting across from me. Though that won’t be the normal way people play, I did enjoy the additional aspect of determining my opponent’s tells and calling his bluffs. Deception was already a key component of Gwent, and it turns out that humans are bigger assholes than computers (ahem, whoever I was playing, you weren’t an asshole, though I am still bitter that you defeated my monster deck so easily).

So! I like playing against humans, which was a surprise. But even if I hadn’t CD Projekt Red is crafting multiple singleplayer campaigns based on deck factions (Northern Realms, Monsters, Scoia’tael, Skellige, and Nilfgaard), and oh my gosh guys it’s so much cooler than I was anticipating. We watched a small segment of the tutorial, which had Geralt and a few companions I wasn’t familiar with. There was full voice acting, including a narrator, and it was delivered by way of an art style that reminded me of Darkest Dungeon, with gorgeously thick black lines. The developers said they wanted to continue telling stories in this universe from various perspectives at different points in time. 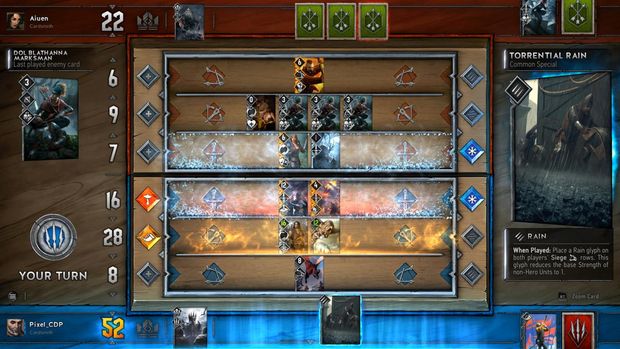 The way that they’re going about making these campaigns interesting aside from striking art is a 3D isometric world map. Between battles with your cards — which now represent your armies and characters in battle, instead of being an in-universe card game — you can navigate through a map that contains quests, secrets, and new ways to find cards. One example shown to us was a small ruin where Geralt found the remnants of a bomb called Scourge and boom now we had the Scourge card. There are also choices to be made that can branch the story out to give the ten-or-so-hour campaigns some replayability.

Narratively, this works much more convincingly than it perhaps sounds on paper (blog?). After a short cutscene showing a forest demon kidnapping one of Geralt’s companions, a battle ensued. That monster and some of Geralt’s friends would shout lines and sound effects that made the stakes seem higher, and the game of cards feel less arbitrary. I’m happy that we’ll be seeing more of the White Wolf himself, because I’m not quite ready to let go, but I’m similarly interested to see how CD Projekt Red will handle something like the Monster faction.

Detail on the pay structure itself is murky at the moment. I can imagine story campaigns costing a set amount, and with entire factions costing a similar amount when playing with others. There’s always the chance of booster packs similar to Hearthstone, but the team isn’t quite ready to talk about that yet. If I can just pay for single player content, I’m in. So very in.

There’s no release date yet, but a closed beta for PC and Xbox One begins this September, and it will release on PS4 as well. Between this and Resident Evil 7, I’m content with this E3 so far. 2016? Good year.