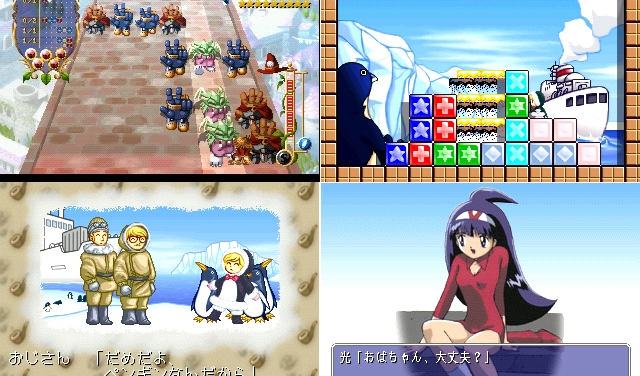 I want all the Japanese PS One games as downloads on the PlayStation Network. Monkey Paw Games is doing a fine job of supplying us with titles, but now GungHo Online gets in on the act with six new digital imports.

The best part of this all is that all of these new titles have amazing names: Makeruna Makendo 2, Art Camion Sugorokuden, Finger Flashing, Lup Salad, ZANACxZANAC, and Vehicle Cavalier. You can’t make names like these up. All of these are available today on PSN for $5.99 a piece.

There are a few good puzzle games, a top-down sci-fi game, a fighting game, and a vehicle action game in the mix. You will find GungHo’s descriptions of each below.

I’ll be nabbing Finger Flashing and Lup Salad today. What about you?

MAKERUNA MAKENDO 2 – A quirky, high-energy fighting game which includes magic attacks on top of the usual stable of special and melee attacks. Players can use magic to increase their HP, increase attack strength and lower enemy defense powers in order to take down their opponents.

ART CAMION SUGOROKUDEN – Presented in a board game-style where dice rolls determine how far trucks move, players can explore Japan aboard a customizable ‘art truck’ and unlock upgrades with which to decorate their vehicles as they complete deliveries.

LUP★SALAD – Classic puzzle-style gameplay is given a twist in this creative puzzle title where players control Salad, a character who is dropped onto the traditional puzzle board and must move each puzzle piece herself. Players must be careful when matching up tiles on the game board though; if they complete one pattern while blocks remain above Salad, she will be crushed and the game will end.

ZANAC×ZANAC – A definitive arcade-style top-down scrolling sci-fi game, ZANACxZANAC packages the classic 8-bit ship-based shooter ZANAC with its sequel, ZANAC NEO. The Auto Level Control system automatically adjusts the game difficulty to match player skill, so 8- and 16-bit sci-fi shooter veterans and newbies alike can enjoy the chaos and fun of blasting everything in space to bits with a variety of weapons.

VEHICLE CAVALIER – A fast-paced vehicle action game that gives players the ability to customize their armaments. Weapons, boosters and special defensive items that cancel out enemy attacks can be mixed and matched to allow players to strategize their vehicle load outs.