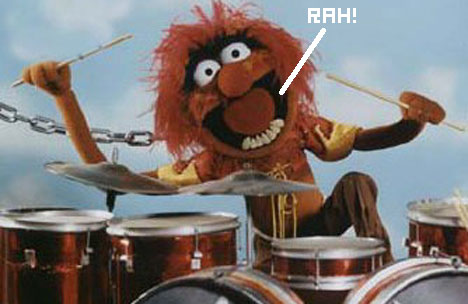 When we learned that Activision had trademarked “Drum Villain” in early 2007, our suspicions became aroused. We waited, and the only thing that happened was Neversoft taking the reins of the Guitar Hero series, and Harmonix taking their ball and going to Electronic Arts to create the multi-instrument title Rock Band.

So what of these drums? According to Neversoft’s Brian Bright, another studio within Activision was indeed working on a drum-oriented title at the same time work was being done on Guitar Hero III. When Activision’s development and marketing dollars started being consumed by GH III, the potential Drum Hero/Villain game was shelved.

“We [even] had a prototype kit,” he told us during a Guitar Hero: World Tour press demonstration. “It was made of wood [from] Home Depot. It was back when Red Octane had partnerships with Harmonix; that was the drum kit being shown to everyone.”

After the drum project was put on hold, it was eventually absorbed by Neversoft, who ran with it for Guitar Hero: World Tour. As for the drum concept, Bright told us, it’s really not groundbreaking — it just makes sense.