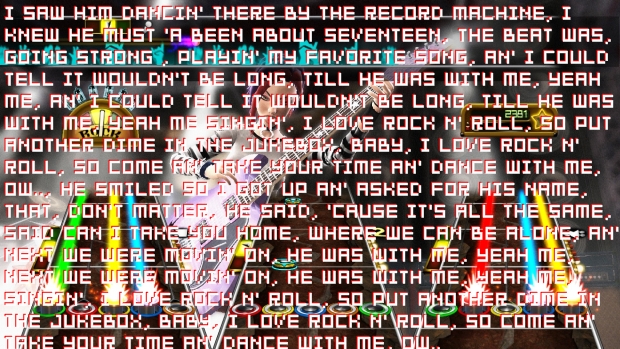 Activision knows what it is doing, that much is clear. For anyone who doesn’t know about DLC or Rock Band — which is, in all probability, a large chunk of the population — Guitar Hero: Smash Hits is going to be like some sort of rock n’ roll godsend. For those of us that do know about DLC and Rock Band, it seems a little less special, but at least we’ll all be saving money if we pick it up, right?

The new trailer below lists songs that are in the game while playing “I Love Rock and Roll.” This is more proof that Activision is smarter than the average bear. See, simply listing a bunch of rock songs is in actuality not a trailer, but when you put a song that even your stuck-up third grade math teacher would bob her head to, then it isn’t as noticable. For instance, read this sentence: dog Alabama fishsticks rollerblade verdant. That is, in fact, not a sentence — but if you play “I Love Rock and Roll” in the background while reading it, you care far less about that fact. Devishly clever, Activision.