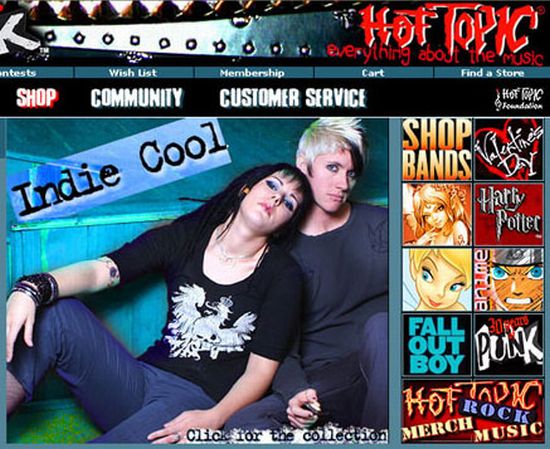 Activision, Pontiac, and Hot Topic are forming a Voltron (Can you imagine that? A Guitar, a Car and an Emo kid forming a giant fighting robot … that cries) and are giving away big prizes to people who play Guitar Hero III.

Activision will be visiting eight Hot Topic stores across eight different cities (location and dates after the jump). Winners will receive a $100 Hot Topic gift card at each of the stops. Then the winners will submit their high score and two random winners from the original eight will win a trip for two to Los Angeles to the Grand-Final. There, they will battle it out for the grand prize of a 2008 Pontiac G5.

I don’t think I’ll have anything better to do on the 5th of next month so I guess I’ll go check out the San Francisco stop. I can take pictures of the kids who will cry and cut themselves that don’t win!  Actually, just cry, blood makes me nauseous.

ACTIVISION, PONTIAC AND HOT TOPIC PARTNER ON A

THE CHANCE TO WIN A PONTIAC G5

Powered By The Pontiac Garage Revealed

SUNNYVALE, CA – November 6, 2007 – To support the launch of Guitar Hero® III: Legends of Rock, Activision, Inc. (Nasdaq: ATVI), Pontiac and Hot Topic are teaming up on a national promotion giving Guitar Hero fans, ages 16 and older, the chance to show off their fret burning skills and win a 2008 Pontiac G5.  During the one month tour, consumers around the country can play the game that everyone is talking about at Hot Topic stores in the following cities:

Qualifying will take place from 3:00 p.m. to 6:00 p.m. at each stop on the tour.  The top eight scores from the Qualifying Round will proceed to the Semi-Final Rounds which will immediately follow.

Winners at each of the eight stops will receive a $100 gift card from Hot Topic.  Additionally, winners will submit their high score on an undisclosed song to determine the two national finalists to advance to the Grand-Finals Round.  The two Grand-Finals Round participants will win a trip for two to Los Angeles where they will compete in front of the game creators at Activision for the right to drive away in a 2008 Pontiac G5.

Aspiring guitar legends can hone their skills by picking up a copy of Guitar Hero III: Legends of Rock which contains explosive new content and features including a multiplayer action-inspired battle mode, grueling boss battles, a host of exclusive unlockable content and visually stunning rock venues.  Expanded online multiplayer game modes will also allow axe-shredders worldwide to compete head-to-head for true legendary rock status.  While continuing to retain all the key features from their prior legendary performances, fresh downloadable content will be offered on multiple platforms, and players can now shred to a killer set list from many of the most popular rock songs ever recorded.

For the first time ever, Guitar Hero fans are able to thrash and burn with new wireless guitar controllers available for each platform, including exclusive Gibson Guitar’s Les Paul model for the Xbox 360™ video game and entertainment system from Microsoft, Wii™ home video game system from Nintendo, and PLAYSTATION®3 computer entertainment system.  PlayStation®2 gamers also get to shred on a new exclusive shape, Gibson’s Kramer guitar, popularized by hard rockers and known for its body design, pickups, electronics and construction for furious finger fretting.

Guitar Hero III: Legends of Rock , developed by Neversoft, is rated “T” for Teen by the ESRB, and is currently available at North American retailers.  For more information about the Guitar Hero franchise, please visit the dedicated community site: www.guitarhero.com .