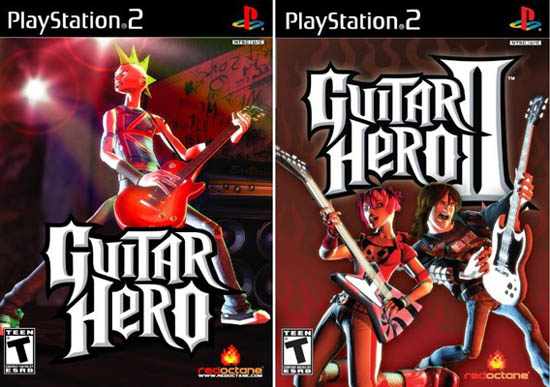 If you just got into Guitar Hero by way of Guitar Hero III, or you somehow missed the first two versions, you’ll be glad to know a new dual pack containing the first two games for the PlayStation 2 is now available.

Activision has just released the two-disc pack containing Guitar Hero and Guitar Hero II, and your local games retailer should have it in stock. There’s over 100 songs to rock out to between the two titles, which isn’t bad for the asking price of $59.99.

It would be nice to see the inclusion of the Encore: Rocks the 80s into some kind of bundle at a later date.

For those looking to rock out even harder this holiday season, Activision will deliver a special dual pack that includes the hit titles, Guitar Hero and Guitar Hero II.  The two-disc software-only set is now available exclusively on the PlayStation®2 computer entertainment system in retail stores nationwide, and aspiring rock gods can add these legendary games to their expanding Guitar Hero collection.

Guitar Hero, the original title of the wildly popular franchise, allows fans to choose from multiple rock characters and jam at concert venues that grow in size as their rock career progresses.  Players can choose from various guitar options, exclusive character outfits, and unlockable songs while they perform to secure endorsements and reach ultimate rockstar status.  Over 40 incredible rock anthems fill every stage of the game as axe-shredders rip through tracks such as “Iron Man” (as made famous by Black Sabbath), “More Than a Feeling” (as made famous by Boston), “Bark at The Moon” (as made famous by Ozzy Osbourne), “I Wanna Be Sedated” (as made famous by The Ramones), and many more.

Guitar Hero II, the sequel to the smash hit Guitar Hero, melts the knobs off players’ amps with an expanded track list of over 60 new songs, characters, guitars, exciting gameplay modes, and visually-stunning rock venues that range from high school gyms to sold-out arenas and Stonehenge.  Fans also have the opportunity to compete with their friends head to head in all new multiplayer modes, or form their own guitar duo and riff cooperatively by rocking the rhythm, lead, and bass.  In addition, an all-new practice mode is included that will allow players to select specific sections of a song, slow it up, and master the difficult solos.  Tracks from the set list include “Sweet Child O Mine” (as made famous by Guns N’ Roses), “Free Bird” (as made famous by Lynard Skynard), “Woman” (as made famous by Wolfmother), and “You Really Got Me” (as made famous by Van Halen) among many others hit songs.