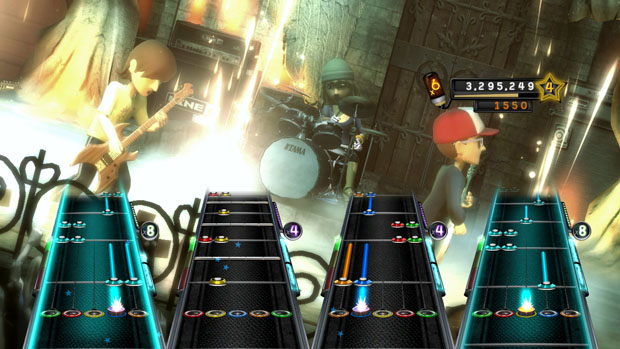 I’m not exactly sure why this is an accomplishment, but it is something.

Activision says that 1 million Facebook fans demonstrates the “global appeal and passion for the brand that is quickly becoming the next platform for experiencing music and social interaction.”

I checked it out this morning, and it looks to be a pretty active Facebook page. People are suggesting songs and bands, and it looks like Activision is listening. That’s pretty cool, I’d say. I would have actually focused less on the popularity contest and focused more on how the company is taking care of their fans. You don’t see that everyday.

See the full press release below.

Activision Publishing, Inc.’s (Nasdaq: ATVI) Guitar Hero(R) is the first console videogame franchise to surpass 1 million Facebook fans demonstrating the global appeal and passion for the brand that is quickly becoming the next platform for experiencing music and social interaction.

Guitar Hero isthe #1 best-selling third party video game franchise in North America and Europe calendar year to date. Since its release, the franchise has sold more than 38 million units worldwide, including more than 7 million units in calendar 2009 alone, according to The NPD Group, Charttrack and GfK.

Guitar Hero 5(R) was released on Sept. 1 to critical acclaim for its music variety, innovative gameplay and empowering fans to rock anyway they want with all-new features that make it the most social and interactive Guitar Hero game ever. Official Xbox Magazine said, “This is the Guitar Hero game to own” while AOL GameDaily said, “Guitar Hero 5 feels just fresh as it did when the series debuted on the PlayStation 2.”

Guitar Hero’s Facebook community can come together at the social networking site to get the latest information on Guitar Hero games and the artists in the games, as well as share their favorite artists, songs, and Guitar Hero experiences. Facebook fans also gain access to exclusive information and content on past, current and future games.