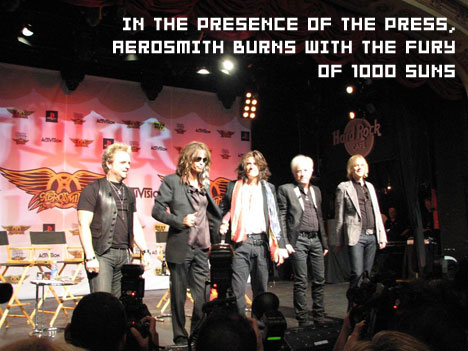 Samit and I finally met at Penn Station to find out what would be going on here. What exciting new things could we hear about at Aerosmith’s press conference, and how would the crowd react to Guitar Hero: Aerosmith?

Well, let’s head after the jump to see what Samit and I had to say.

Ah, celebrities and videogames. A truly wonderful combination, especially when you consider that this is Aerosmith, one of the pioneers of rock music and videogame crossovers. Just look at Revolution X and Quest for Fame! Truly, legendary titles. Spite and venom aside, there really wasn’t much to this event.

Samit and I arrived at the Hard Rock Cafe to find the press waiting around for the event to start, and pseudo-Japanese food being passed around. Once it got close to 4 PM, when the band was supposed to hold a press conference, the VIPs came in. Drunk. These were people who were here just to see Aerosmith, and get a chance to shout, scream, and get in the way of press when they were trying to take photos. So while we waited for Aerosmith to take the stage, we were entertained by drunken karaoke coming from one corner of the room.

After the MC came on, it was time for the usual drum-up of “Aerosmith is the greatest band in rock history” and “Guitar Hero continues to be the biggest innovation in fusing music and gaming.” Then, Aerosmith came on. I can understand why Steve Tyler needed his sunglasses, despite the fact the room was dark and made it nigh-impossible to get decent photos if you didn’t have a DSLR. The band talked a bit about what the experience was like going through the motion capture process in order to be inserted into the game.

Once it came time for Q&A with the band, pretty much all the videogame stuff went out the window. About half the questions were, “I’ve loved your music since I first heard it back in 1976 in my now-husband’s Camaro, and I just wanted to say that I listen to you guys everywhere in my house — when I’m cleaning, doing the laundry, etc.” That was a real quote, by the way. Otherwise, people asked about them playing Guitar Hero with their families, their favorite songs, etc. The only interesting little bit of information was that Activision had approached Aerosmith about doing this game, so it’s certainly possible that they’ll be approaching other bands in order to keep themselves more separate from Rock Band — a move that I’d expect out of EA, normally.

Check out the photos down below for what it was like to be in the relative presence of Aerosmith. Did we actually get to meet them for some alone time? Well, I got half a foot on the same stage as them, before nearly getting shoved off the platform by one of the security guards.

Unlike Brad, most of what I have to say about this event is “spite and venom.” The Aerosmith press conference was supposed to begin at 4 PM, but of course, everyone always likes to be fashionably late, so the band wasn’t brought out on stage until around twenty minutes after the stated start time. Before then, though, the five rockers came out of the backstage area to near-hysteric shouts of “AEROSMIIIIITH” and other assorted whoops of praise. One group of revelers, the suppliers of “drunken karaoke,” as Brad called it, wouldn’t shut up through the entire lead-up to the conference itself. They were singing along to all the Aerosmith songs being played on loop, and seemed to have a particular regard for lead guitarist Joe Perry, whose name they shouted as if hoping he’d come over and touch each of them in their special place.

Eventually, things got rolling. The master of ceremonies was Q104.3 DJ Eddie Trunk, who you may be familiar with if you listen to New York’s #1 Classic Rock Station (not an advertisement) like I do. He introduced Aerosmith as “the first band to have their own Guitar Hero videogame,” along with listing their other accomplishments, and once the curtain went up, so did the photographers. It was a mad dash to the stage to grab a shot of the gang, and I certainly wasn’t jumping into the fray. Brad attempted to do so, but was impeded by a large man in a suit who said something like, “That’s it for the stage.” The bastard.

Eddie started off with a few good questions, but that all went to shit once the floor was opened up to the audience, which consisted of people with badges that said either “Press,” “Meet/Greet,” or “VIP.” Brad and I presumed that the latter two groups had paid, and paid well, for the privilege of attending — in other words, they looked just as snooty and stuck-up as they probably were. Most of the “questions” were either standard-fare stuff (“What’s your favorite song to play live?” — not like that one hasn’t been done to death) or people wasting time fawning over the band and how they were personally affected by their music, blah-de-blah-de-blah. Ugh. One older-looking man even introduced himself as being from CNN, so I assumed that something intelligent was going to come out of his mouth, but that all went out the window once he started to prattle on about how he’d seen Aerosmith live 96 times … please, kill me now, I said. But hey, bassist Tom Hamilton apparently cared, since he asked the dude to get him in touch with Wolf Blitzer…

One question elicited something of an interesting reply, though. When asked about why they decided to take part in this venture, Joe Perry spoke at length about the recent decline in the record industry, and now that videogames are on the rise as a medium, the band figured that Guitar Hero: Aerosmith would be a great way to A) introduce their music to a new generation, and B) make money in a completely new way, because, “this is what the kids are into now.”

After a post-conference photo op (in which Brad was able to shove through the sycophantic public and snag a few shots — see gallery below), we headed to the press check-in table to see if the game was actually playable at the event. The announcement press release said it would be, but we hadn’t seen any demo kiosks set up anywhere. But they were just in a different area, and after I owned a drunken partygoer in the Run-D.M.C./Aerosmith version of “Walk This Way,” Brad and I decided it wasn’t worth sticking around any longer.

Well, there you have it, folks. I’m not going to lie and say the event was a complete waste of time — it was pretty cool to be within 20 feet of Aerosmith. But overall, I’d easily say that the highlight of my day was finally meeting Mr. Brad Rice — even though we didn’t share the same opinion of The Incredible Hulk.