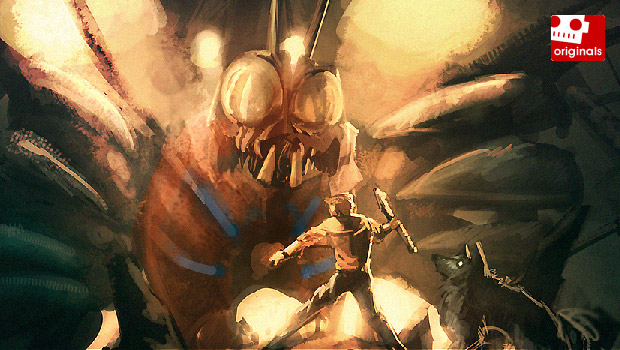 The Super Nintendo Entertainment System is without hesitation THE system of my childhood. In recent years, I’ve been less than enamored with some of Nintendo’s decisions, both commercially and creatively, but nothing they do can ever take away the amount of fondness I have for that grey and purple plastic box.

Even if you asked people who grew up playing Sega Genesis, there’s no denying that the SNES had a lot of incredible games. Titles like Super Metroid and The Legend Of Zelda: A Link To The Past played a big part in my personal golden age of gaming, but they weren’t the only ones I loved. There were other games that I have metaphorically blown on and inserted into a very special cartridge slot in my heart.

I wouldn’t call these games “guilty pleasures,” per se, but I hesitate before loudly declaring them “classics.” They’re not all even SNES exclusives, they were just games I played on the system. They might not have aged as well, but when looked at through the rose-tinted glasses of nostalgia, they’re pretty awesome, and I feel the need to wax nostalgic about them for a moment. 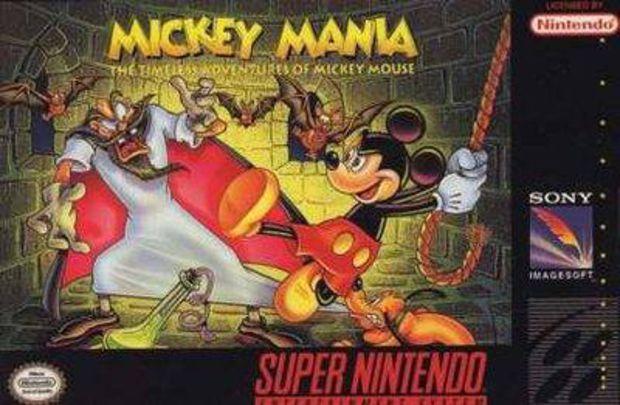 I’ve never been a Disney kid. I saw the movies, but unlike a lot of people my age, I’ve never been to a Disney theme-park, or had a favorite Disney home video that I watched on repeat. That being said, Mickey Mania: The Timeless Adventures of Mickey Mouse is one of my favorite Super Nintendo games. The premise is fairly generic; Mickey’s been sucked through a cartoon time-warp by some evil wizard, and you’ve gotta guide him through a greatest-hits collection of his animated adventures via pixelated platforming. 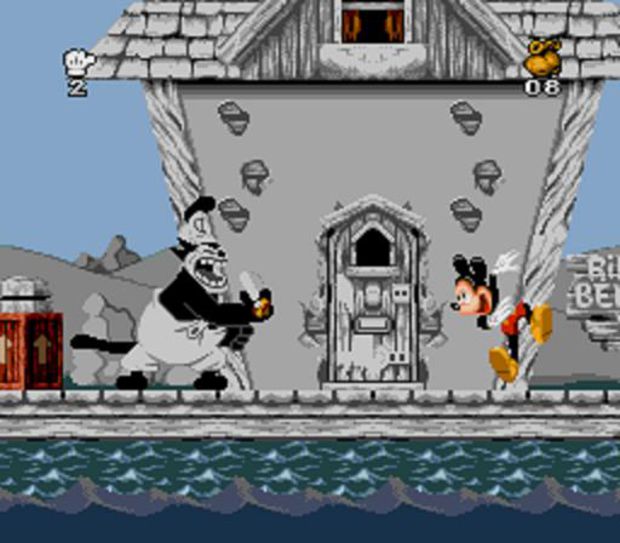 If there’s one thing I can’t stand about SNES generation’s games, it’s that depressing grey palette.

This mediocre concept was executed quite well. The first level was based on Steamboat Willy, Mickey Mouse’s cartoon debut. It was rendered almost completely in black and white, a concept that’s rather uncommon when creating a product for children. Mickey ran around throwing marbles at various goons and jumping on things. Later levels had him escaping a charging moose and riding a gurney through the halls of a mad scientist’s castle. All in all, a very charming game. 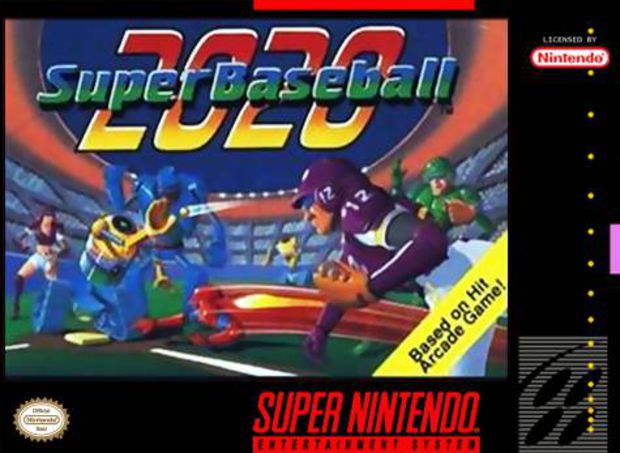 I don’t like sports, and because of this, I’m generally pretty bored by sports games. Unless, of course, they take place in the future and involve robots. Super Baseball 2020 is a baseball game set in the far-off year of 2020. It’s just like regular baseball, except it’s co-ed, with men and women competing together, while wearing power armor, computer sensors, and jetpacks. And also, some of the players are robots. 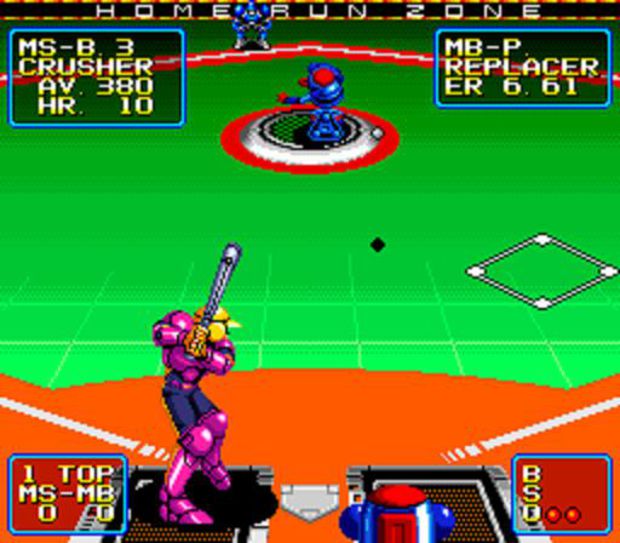 It’s basically a prequel to Super Metroid, where Samus is on a baseball team with robots and her cute friends, and they all shower togeth– Oh. Uh. Sorry.

I’ll be honest here: I have no idea how regular, present-day baseball works, so any differences between the actual sport and Super Baseball 2020 are beyond me. I just think robots and jetpacks are really cool. Hopefully, in 2020 A.D., eight years from now, Super Baseball will be a real sport, because I have a feeling I’d be super-good at it. 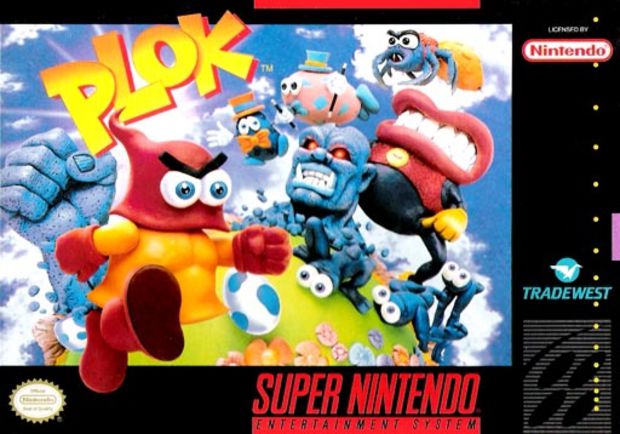 I’m not sure how to preface a game like Plok. I’ve spent almost two decades knowing what Plok is while still having no idea what Plok is. As near as I can tell, he is either a humanoid starfish, or some kind of mutant Ku Klux Klan member. Plok lives in a world where everything is named after different types of fabric. After his flag is stolen, he goes on a rampage through this strange textile-themed island nation. By rampage, I mean he goes around collecting a bunch of seashells and hurling his own limbs at rabbits made out of burlap sacks. Actually, I’m not sure if they’re rabbits, they might be potatoes. And also Plok sometimes transforms into a football player or a sawblade. 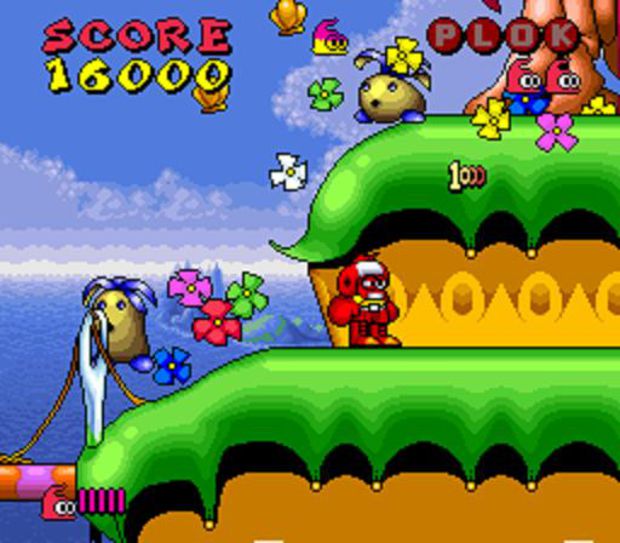 This would’ve been a very controversial game if anyone had any f***ing idea what was going on.

I don’t understand Plok, and I can’t even tell if I enjoy the gameplay. However, I love the game because it’s a shining example of batshit-crazy weirdness that video games often had in the early nineties. I just can’t imagine a team of marketing people sitting around in a boardroom, analyzing trends or sales figures, trying to streamline Plok to be appealing to children. At the same time, I don’t imagine a small team of developers trying to create a work of art. Plok was just Plok, and thinking about the game makes me smile. So someone obviously did something right. 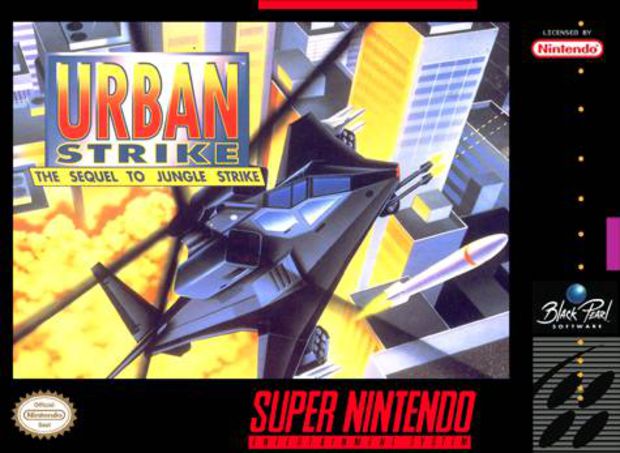 One of the things I miss most about a kid is the simplicity of buying games. We didn’t read reviews, we didn’t argue in forums. We just kind of went with what we thought was cool. In the case of Urban Strike, the justification was “Dude, the box for that game has a picture of a stealth helicopter blowing stuff up in a big city.” I now know that Urban Strike was the third game in the Strike series, preceded by Desert and Jungle Strikes. Back then, I just thought “Urban” just sounded cooler.

Thinking back to the summer of 1995, I don’t remember Urban Strike having much of a plot. Reading up on it now, it sounds like some intense Modern Warfare business. According to Wikipedia, Urban Strike takes place in the year 2001. A billionaire media mogul, former presidential candidate, and cult leader is plotting to destroy the World Trade Center with his super-laser. So, basically the bad guy is Osama Bin L. Ron Paul Murdoch. How can we ever face such a threat? Well, with action-packed isometric helicopter rescue mission combat, obviously! With some on-foot missions too. 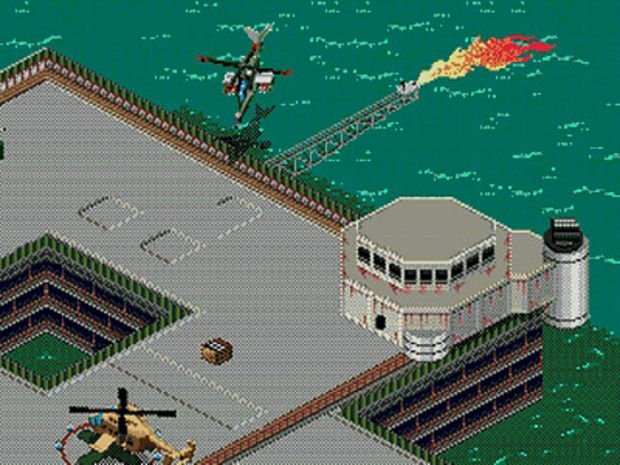 Look at that strike. It’s just so… Urban.

As a nine-year-old, this was not an easy game. The chopper’s controls were clumsy, and it had terrible mileage. If you ran out of fuel, you would crash, explode, and die. If you ever got far enough into the game for the on-foot missions, they were stressful and terrifying. Why do I have fond memories of this game? I have no idea. But seriously, dude. Look at the box. It has a helicopter on it. And it’s blowing stuff up in a city. That’s awesome. 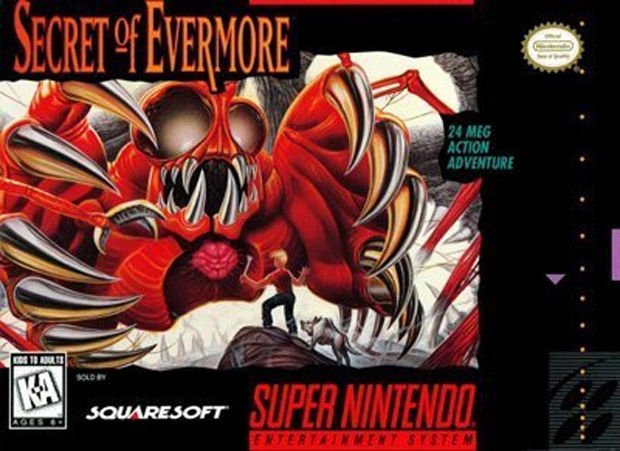 Squaresoft’s RPGs are some of the Super Nintendo’s most respected games. Final Fantasies IV and VI (or II and III, as they were known back in my day) are practically hallowed, and Secret of Mana is right up there with them. To the ire of many a Japanophile friend, my personal favorite has always been Secret of Evermore, the bastard spin-off of Secret of Mana. 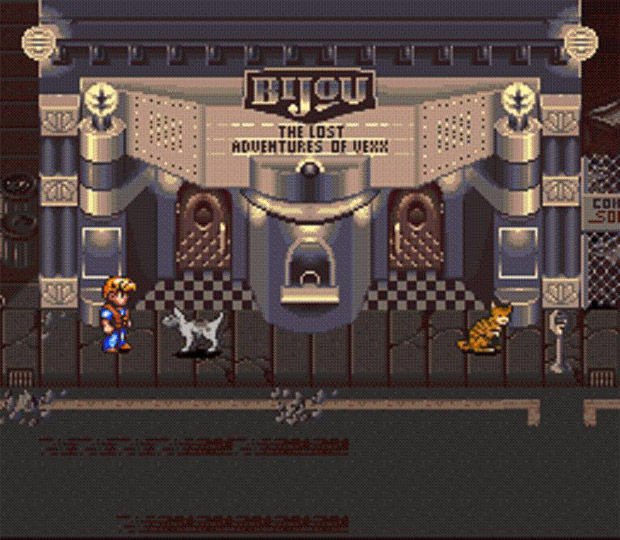 I spent a good portion of my real-life childhood loitering outside adult movie theaters in the bad part of town.

Secret of Evermore is an American-made action-JRPG that really, really wants to be a Lucasarts title. Most people fault it for not being Secret of Mana, but that’s actually why I’ve always liked it better. Secret of Mana was a pretty typical JRPG story: you’re chosen to save the world and there’s some magic life tree or something. My issue was that it wasn’t relate-able. It was a fantasy world built from the floor up, too far removed from anything I was familiar with as a kid. Plus, everything was way too colorful. I mean, really. The hero character dressed like Cyndi Lauper.

Secret of Evermore, on the other hand, was about a kid from a boring little Podunk town (it was actually named Podunk) who got sucked into a mysterious land that was all loosely inspired by different stages of history. Your only other party member was your dog, and he took different forms depending on which area/time period of Evermore you were in. In the self-explanatory prehistoric realm Prehistoria, the dog was a giant wolf. In the futurisic land of Omnitopia, he was basically a flying toaster that shot lasers. In the medieval/Victorian Gothica, the dog was a pink poodle for some unexplained reason. 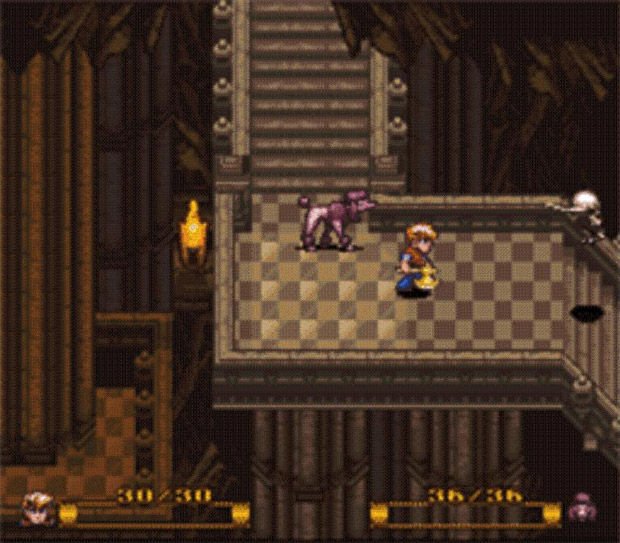 You get a poodle and a bazooka. Your move, Secret of Mana.

When I was a kid, concepts and design decisions like this were much more interesting to me than those of Secret of Mana. Secret of Evermore was childhood fantasies and daydreams, except squeezed into the snug, fluorescent pants of a Japanese RPG. I, too, wished to be sucked out of mundane small town life and plopped down in a world where I could kill bouncing cat-mummies with acid rain spells. Secret of Evermore delivered that. 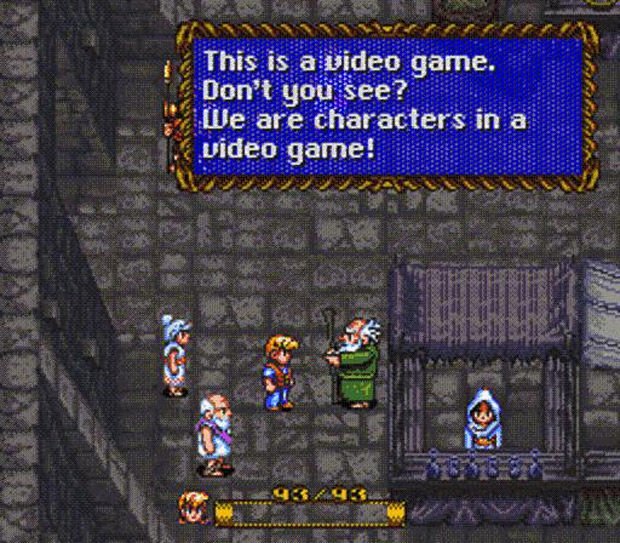 Don’t tell me that. You’re ruining the magic, jerk.

So, there you have it. A completely inconsistent list of video games that I don’t think get the respect they deserve. Everyone always brings up the fun times with Mario, Link, and Samus; I’m just as grateful for the Super NES for filling my childhood with helicopter explosions, robot baseball, and men tearing off their own limbs and throwing them at stuff.

Happy birthday, Super Nintendo. You are my favorite grey and purple plastic box.