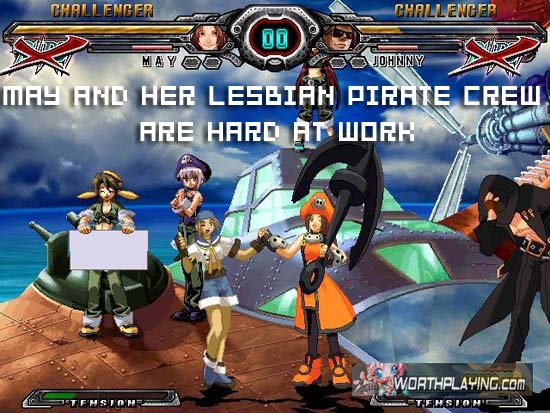 Finally, the most recent edition of Guilty Gear is coming over to the US. Aksys Games has announced that they will be bringing the fighter over in both PS2 and Wii flavors. As of right now, the game is slated to be released in the Fall of this year.

So, why should you buy Accent Core? Well, if you’re a Guilty Gear fan, then it’s just an automatic purchase. For the rest of you, the game will be featuring re-recorded voicework, some new artwork, and the ability to make a fool of yourself by playing with the Wii waggle controls.

So, once a firm release date has been announced, expect me to harass the rest of the review crew into buying the game. The game hasn’t been rated by the ESRB, but I doubt that it’ll run into any problems — unless they have a problem with Bridget, for some reason. (For those who really don’t know, Bridget is never worksafe.)

Check out the press release with a full mention of the additions after the jump.

[Thanks to tip-a-holic Joe Burling for pointing this out!]

Torrance, CA (June 22, 2007) – The newest incarnation of the popular fighting game franchise, Guilty Gear XX Accent Core, comes to the PlayStation®2 and Wii, courtesy of Aksys Games, a publisher of interactive entertainment products. Developed by Arc System Works, this latest iteration returns with its trademark high-resolution graphics along with an entirely retuned fighting system, new stages, new characters, graphics, voices and the ability to create matches between old and new characters in the Generations Mode.

“Accent Core is definitely a game for the elite fighting game connoisseur, with its wickedly fast, technique oriented gameplay,” said Michael Manzanares, Producer, Aksys Games. “Guilty Gear veterans will definitely enjoy finding out all the intricacies of their favorite characters and mastering all the new gameplay enhancements and systems.”

Gulty Gear XX Accent Core has not yet been rated by the ESRB. More information about Aksys Games and Guilty Gear can be found at www.aksysgames.com.